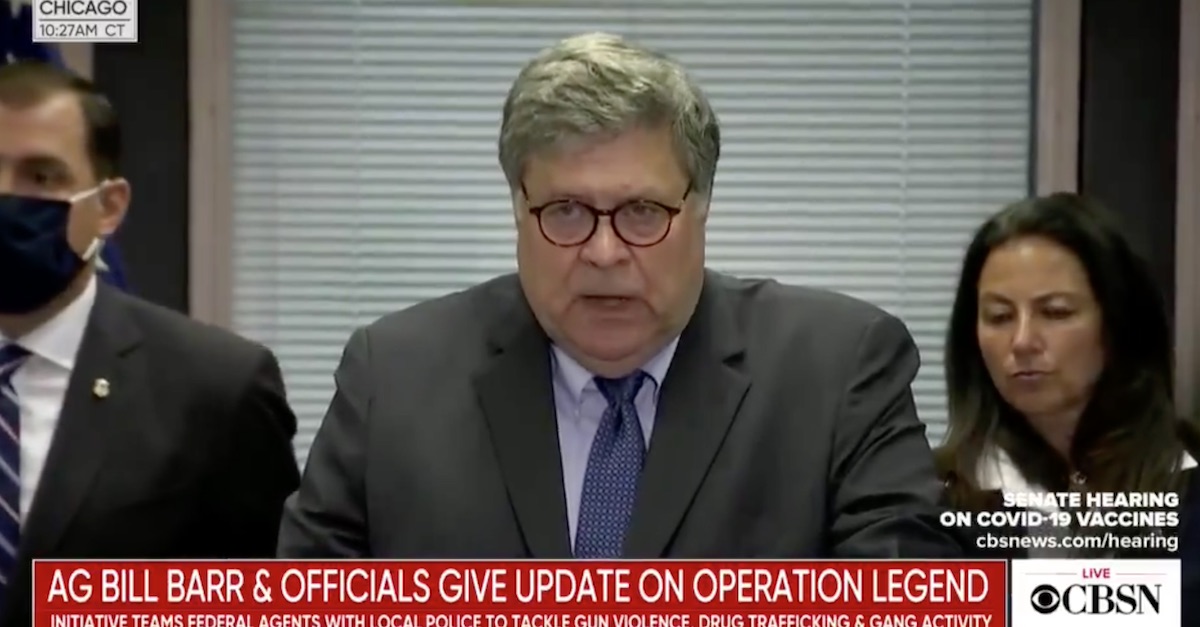 Attorney General Bill Barr, during a press conference in Chicago that largely focused on the success of federal law enforcement’s Operation LeGend in reducing deadly violence, responded to a question about the Department of Justice’s controversial takeover of E. Jean Carroll’s defamation case against President Donald Trump. Barr dismissed criticism of the move as a “little tempest” that is nothing more than the product of the “bizarre political environment” in which we live.

In case you missed it, the DOJ on Tuesday argued that the state court civil case Carroll filed against the president should be removed to federal court, where the DOJ will doubtless assert that the president of the United States is immune from defamation lawsuits that arise from statements made in the course of official action—including the denial of rape accusations. In short, if the DOJ successfully becomes the defendant in place of Trump in federal court the department will likely assert that the case should be dismissed entirely.

When Barr was asked about this intervention on Wednesday, he styled it as a “somewhat routine” action. He said the “case law is crystal clear” that the Westfall Act applies to the president.

Barr said the Westfall Act was invoked by George W. Bush, Dick Cheney, and Barack Obama when they were in office. Barr said that officials who are elected and answer press questions in office, even about personal affairs (as Trump did when calling Carroll’s rape accusation a lie), is subject to the Westfall Act.

“This was a normal application of the law. The law is clear, it is done frequently,” Barr said, pointing to a D.C. Circuit case Council on American Islamic Relations v. Cass Ballenger. The holding of the D.C. Circuit in that case:

In this defamation action, we consider whether a congressman acted “within the scope of employment” when he discussed his marital status in his office, during regular business hours, in response to a reporter’s inquiries. The District Court held that he did, and we agree. We therefore affirm the District Court’s conversion of the case into an action against the United States pursuant to the procedures set forth in the Federal Employees Liability Reform and Tort Compensation Act of 1988 (“Westfall Act”), 28 U.S.C. § 2679, and its dismissal of the suit for lack of subject matter jurisdiction because the United States has not waived its sovereign immunity. See id. § 2680(h).

Barr then called criticism of the DOJ’s intervention a “little tempest.” He said he would “leave it at that.”