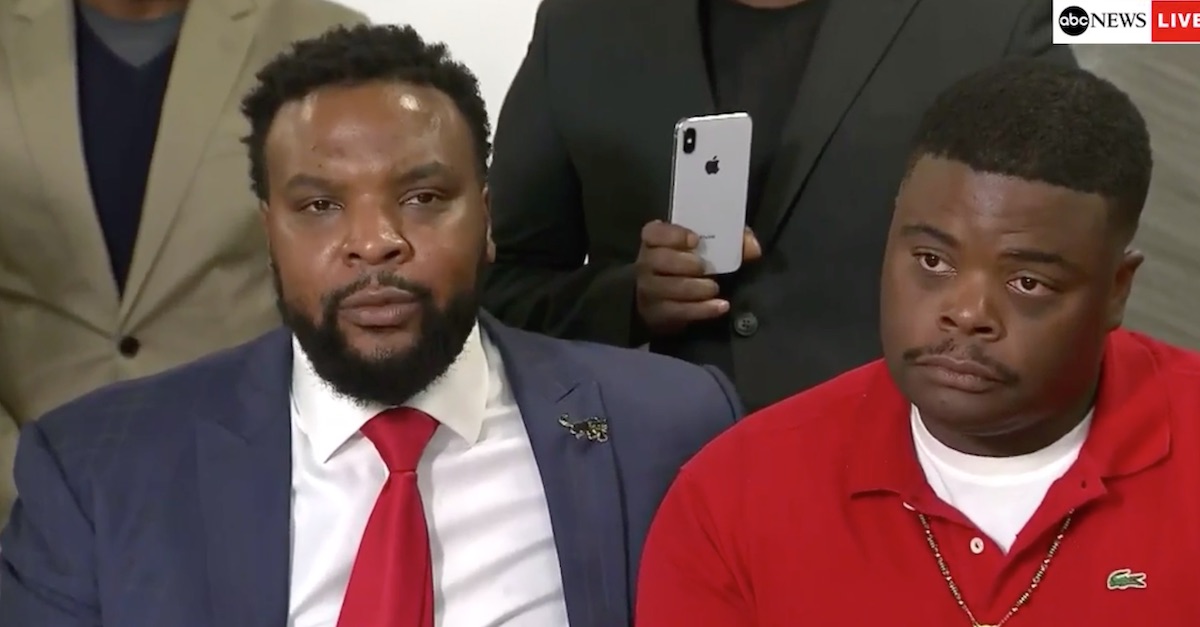 Update: the officer has been identified as Aaron Dean. He resigned on Monday before he could be fired.

At a press conference on Monday, an attorney, an activist and grieving family members unanimously demanded that the Fort Worth police officer who gunned down 28-year-old Atatiana “Tay” Jefferson in her own home over the weekend be prosecuted to the fullest extent of the law.

Atatiana Jefferson was fatally shot inside her home by a white police officer. Her family says an outside agency should investigate.
"Fort Worth PD cannot investigate themselves… This man murdered someone. He should be arrested," said her brother.https://t.co/iflIzHJtYj pic.twitter.com/3yJccV9PF7

“I am currently stationed in San Diego. I’ve served my country for the last 12 years. In that time, I’ve been trained and taught there are pre-planned responses to everything you do,” he said. “Everything you’re trained about, there’s a way to do things. But when you don’t do it the way you’ve been trained or you’ve been taught, you have to answer for that.”

“Fort Worth PD cannot investigate themselves,” Carr continued. “This man murdered someone. He should be arrested.”

Ashley Carr, one of Jefferson’s older sisters, said that her deceased loved one was “killed by a reckless act.”

“There is simply no justification for [the officer’s] actions,” she said. “We demand justice for Atatiana through an independent, thorough and transparent process.”

“It is imperative that your response bends towards justice,” she added.

Amber Carr, the victim’s older sister by 11 months, said it was her son that Jefferson was watching when she was killed. She also said her son was the first to tell her what happened. Jefferson was playing video games with the boy before she was shot. He witnessed the killing.

Atatiana Jefferson’s sister Amber Carr says her 8 year old son who was in the house at the time says the boy was the first to tell her that a police officer killed his Aunt. @NBCDFW #NBCDFWNow pic.twitter.com/c5XemgFTcW

Cory Hughes, a Fort Worth social activist, said Monday that the killing was “unacceptable. We are demanding justice.” Hughes said that the officer involved should be prosecuted.

Attorney S. Lee Merritt, who represented Botham Jean’s family, demanded that the shooting be independently investigated, and the officer “vigorously prosecuted.” He said the City of Fort Worth is not competent to investigate itself. Merritt said that Fort Worth needs to recuse itself, bring in an outside agency, and make sure the officer is “treated like any other criminal suspect in the criminal justice system.”

The police shooting occurred early Saturday morning (around 2:30 a.m.) — less than two weeks after a jury convicted former Dallas cop Amber Guyger of murder for shooting and killing Botham Jean in his own home. In both of these cases, the officers were white and the victims were black. Guyger claimed that she parked on the wrong floor of her apartment complex, only to barge into Jean’s apartment thinking it was hers; she shot him to death believing he was an intruder, she said. In the Jefferson case, a neighbor called police at a non-emergency number because he was concerned that the front door of Jefferson’s home was open.

James Smith told reporters Saturday that he got a call from his niece that his neighbor’s front doors were open. He said this was unusual for Jefferson; he saw all the lights in the house were on. He said he called officers to the scene, but meant it only as a welfare check to make sure she everything was okay. Smith said he gave no indication that this would have been a dangerous situation justifying officers approaching with their guns drawn. Smith said he didn’t know what was going on at the home, but maintained that Jefferson would not have been a threat.

A police officer responded to the scene and killed Jefferson; she was playing video games with her 8-year-old nephew.

Merritt has said that Jefferson was murdered.

“She was playing video games with her nephew when they heard what they believed to be a prowler creeping around the back window of the home,”Merritt said in a statement Saturday. “When she went to see what was going on she was confronted by an officer with his gun drawn shouting commands. With just seconds to comply, she was shot through the window.”

Police announced Saturday that Jefferson was shot and killed when officers responded to an Open Structure call. They noted that a front door to the residence was open. Responding officers searched outside the home, and saw a person standing inside near a window.

Jefferson was given no time to comply with the officer’s commands, as the fatal shot was fired less than two seconds after he ordered her to put her hands up. The body cam footage does not show him identifying himself as a police officer. The officer joined the department in April 2018.

According to authorities, officers found Jefferson and a firearm inside. Merritt said that firearm was legally owned.