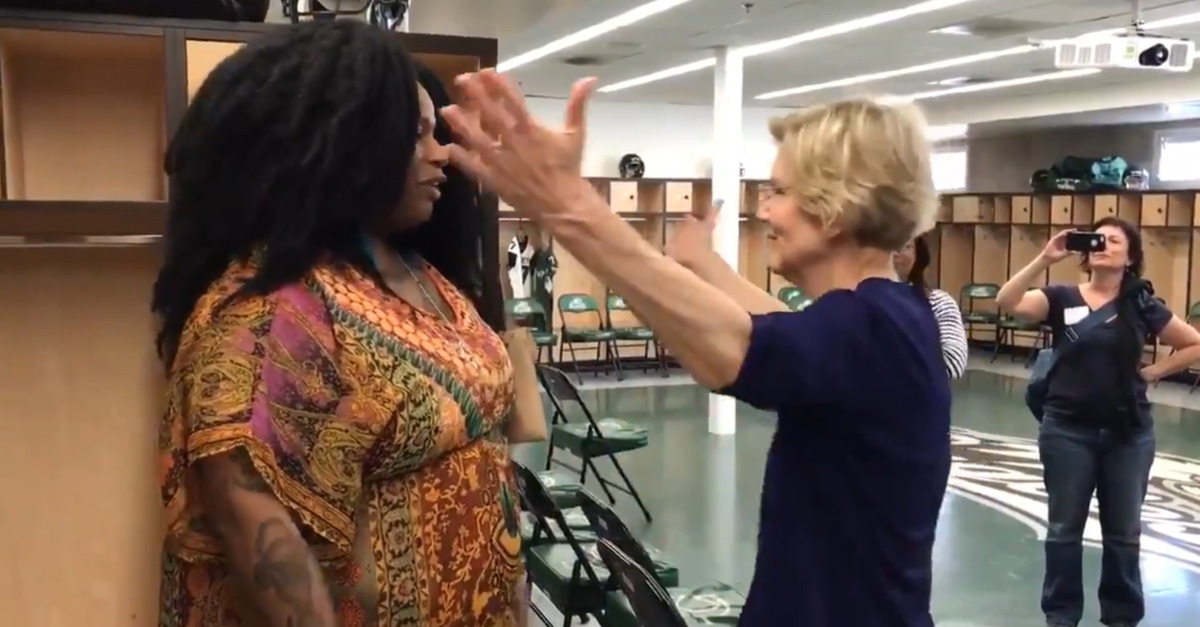 Massachusetts Senator and Democratic presidential candidate Elizabeth Warren is being heavily criticized for failing to vet a high-profile campaign surrogate with a history of making homophobic, racist, misogynistic and xenophobic comments on social media.

Activist Ashlee Marie Preston was featured in a Warren campaign video released October 10. In that video, Preston explains that she’s “a Warren Democrat because I am not afraid of the fight.”

🙌@AshleeMPreston is a #WarrenDemocrat, and so are we. Together, we’re fighting so that all women of color have a voice in our democracy.

But the memory of Twitter is long and unforgiving.

Users eventually noticed several racist and otherwise controversial posts made by Preston over the years.

A Tweet from December 11, 2010 reads: “Latino and Asian businesses need 2 stop being rude & fukn disrespectful, & I kno its A LOT to ask in CA but speak fukn English 2* #yahisaidit.” 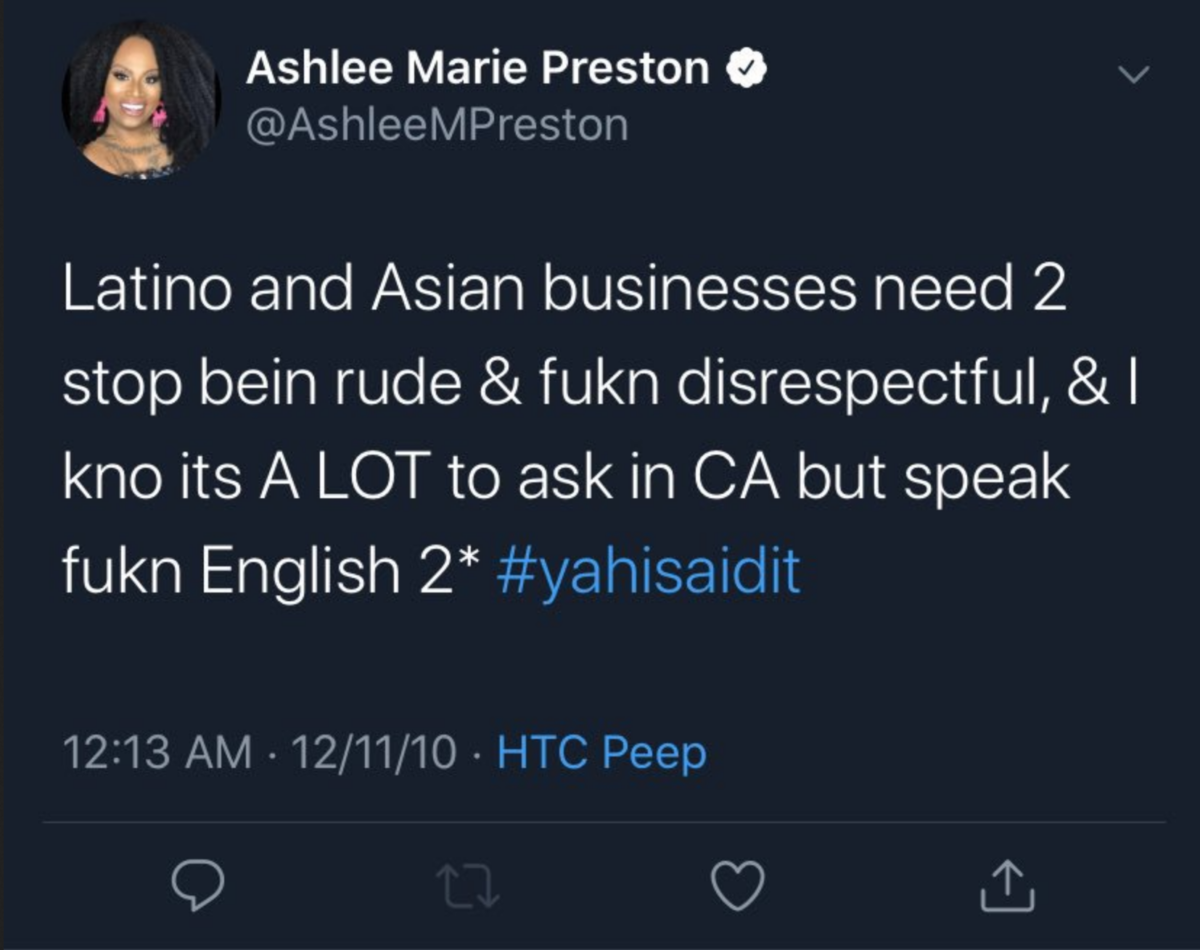 Preston regularly criticized Asian immigrants for their alleged deficiencies with the English language.

A Tweet from December 25, 2010 reads: “Just cussed that Asian bitch clean the fuck out…u mess up my order & THEN blame me?? #englisismyfirstlanguage bitch. Never ordern again.”

The Warren campaign surrogate also made several other unseemly comments about Asian-Americans.

A Tweet from February 22, 2011 reads: “Asian hoes act like they wont get karate chopped in they muthafukn throat. What is this hoe staring at. Mind ya beeswax. #Bitch.”

A Tweet from February 14, 2011 reads: “Jus broke my phone on this Asian bitches head…I have Asian friends..but they some muthafukkn #weirdo sometims #isaiditbutweallthinkit.”

A Tweet from February 25, 2011 reads: “Another damn Asian almost hit me while crossin, what the fuck is it wit yall and damn vehicles? I have an idea…” 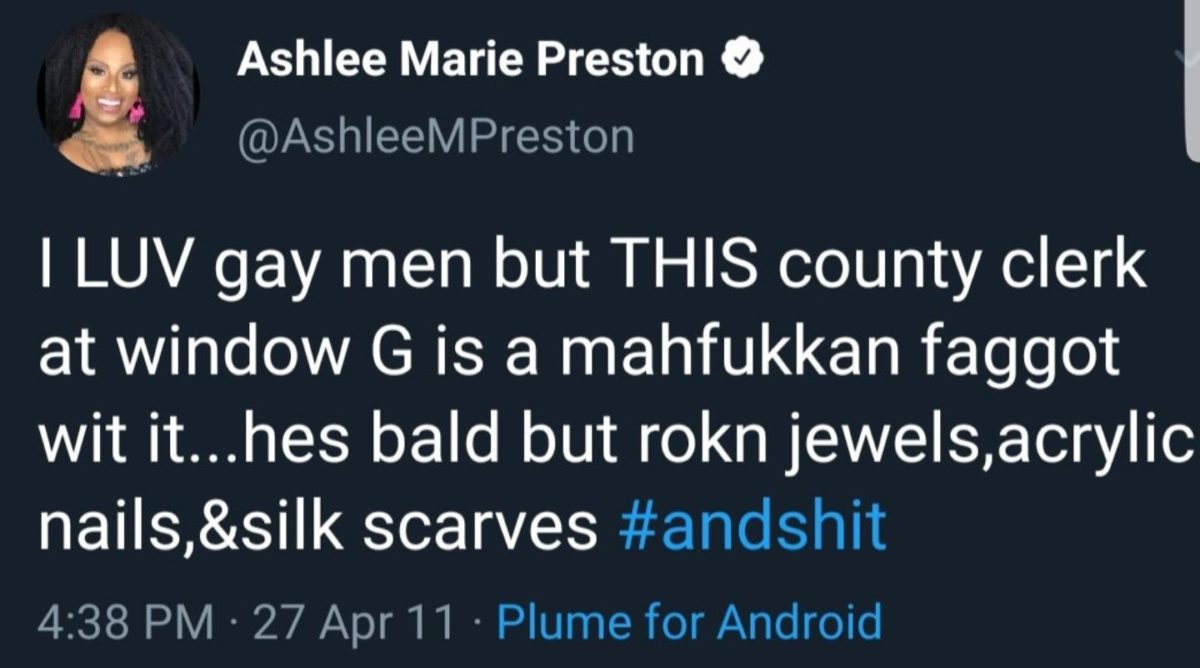 A Tweet from April 7, 2011 reads: “That is thee last time I help that faggot fucker….he’s bringing ME problems Truman help him.”

A Tweet from April 27, 2011 reads: “I LUV gay men but THIS county clerk at window G is a mahfukkan faggot wit it…hes bald but rokn jewels, acrylic nails,&silk scarves #andshit.”

A Tweet from September 6, 2011 reads: “I love strippers…not in like a gay way, but I think theyre beautiful, & I think its art in its own way, sooo #quithating . If u cud u wud.”

Preston, who is now openly transgender, authored several tweets which arguably expressed various degrees of misogyny but which definitely cut against Democratic Party orthodoxy on a woman’s right to choose an abortion. In fact, Preston explicitly expressed pro-life sentiments.

A Tweet from October 5, 2011 reads: “Don’t have #abortions ….people spend thousands yearly trying to experience the miracle of a child. #ProAdoption #GOHARDPRODUCTIONS.”

A Tweet from September 17, 2011 reads: “I get so upset when slut bitches constantly get pregnant and much away on abortion pillz like cheetos… Pregnancy is #kindofabigdeal.”

A Tweet from March 17, 2011 reads: “#shotsfired lol RT @SoulfulCeejay Sometimes I wish I was mexican so I could get free health care my premium is to high fuck u kaiser.”

The controversy came to a head over the weekend after Preston attacked Warren’s primary rival Bernie Sanders by falsely claiming that he hadn’t attended an LGBTQ event since the 1970s. Sanders regularly attends such events.

“The wheels seem to be coming off of Elizabeth Warren’s campaign,” Hines told Law&Crime in a message. “Within a few days Warren is criticized on her LGTBQ record, then gives a canned response to a plant who is a party donor at the CNN LGBTQ Town Hall. Then it’s revealed her new LGBTQ surrogate, Ashlee Preston, has a horrifically bigoted past, and wasn’t transparent about being on the Warren campaign during appearances on TYT. You have to ask, what is going on in Warren’s campaign?”

Preston, a paid campaign surrogate who was previously criticized for not disclosing her ties to the campaign while appearing on The Young Turks, locked her Twitter account over the weekend and has since deleted many of the tweets in question–though several are still publicly available on Twitter.

She addressed the controversy surrounding her history of racist and derogatory tweets by saying that she was addicted to drugs at the time the posts were made–but pointedly blamed her political enemies for resurfacing those offensive tweets.

“Although those tweets were resurfaced as a political play; I take full responsibility for my actions and deeply apologize for my actions to those I’ve offended or hurt,” Preston wrote on Monday morning. “I also apologize to those indirectly impacted by these developments. At over 7 1/2 years clean and sober; I’ve learned to make amends when I’m wrong and to take complete accountability for my actions.”

A tweet from last year, however, appeared to undermine Preston’s addiction excuse.

“I’d beat the dog shit of out you; furry slipper wearing ass fuck boy,” Preston tweeted on September 8, 2018. “IRL I’d smash your fucking head in like a can of A&W Root Beer–But ima fall back and let you keep pretending for the internet…dick rider.”

Law&Crime repeatedly reached out to the Warren 2020 campaign for comment on this story but no response was forthcoming at the time of publication.

A Twitter post from the candidate herself expressed support for Preston and retweeted the campaign’s original video advertising the controversial surrogate’s support.

“Thank you @AshleeMPreston,” Warren tweeted, “you give me hope too as we fight for a better future!”

Editor’s note: this article has been amended post-publication to account for additional offensive tweets.