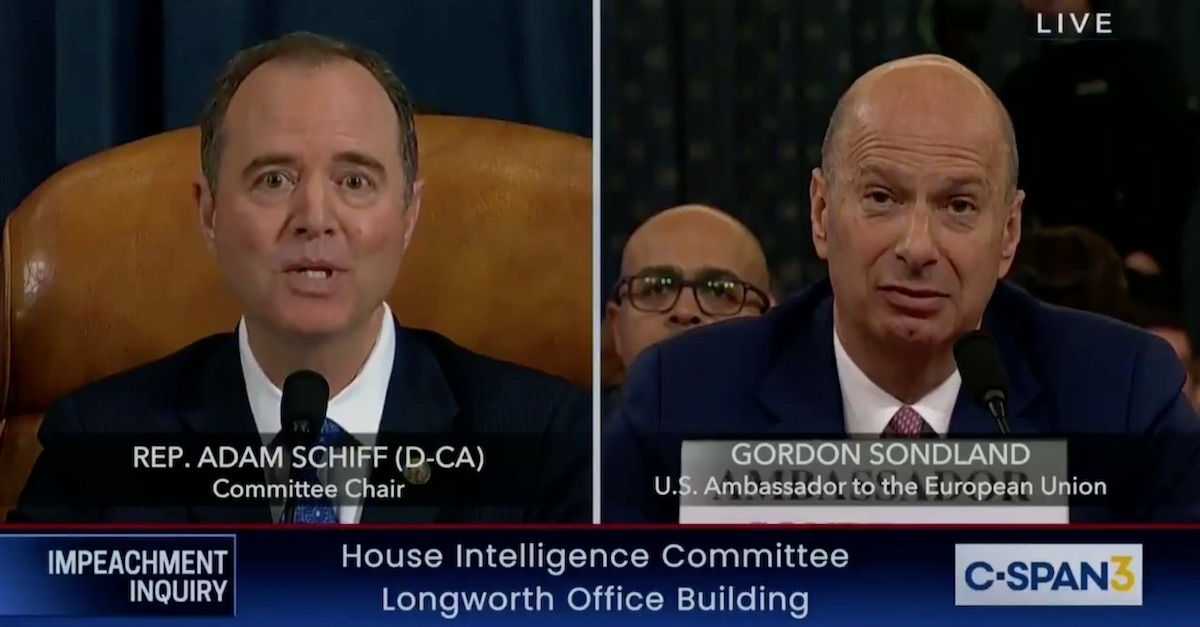 House Intelligence Committee Chairman Rep. Adam Schiff (D-Calif.), in his closing remarks on Tuesday, discussed elements of the crime of bribery, saying that bribery “does involve a quid quo pro” and “involves the conditioning of an official act for something of value.” That closing statement turned out to be a preview of things to come.

On Wednesday, Rep. Schiff grilled U.S. Ambassador the EU Gordon Sondland on the quid pro quo that Sondland admitted to in his opening statement. In case you missed it, Sondland said the following: “Was there a ‘quid pro quo?’ With regard to the requested White House call and White House meeting, the answer is yes.”

Schiff asked Sondland point-blank if the White House meeting — the “official act” — was conditioned on the Ukrainians’ announcement of investigations into the Bidens and the CrowdStrike conspiracy theory (the unsubstantiated Russia-backed theory that Ukraine, not Russia, meddled in the 2016 U.S. election to undermine Trump’s candidacy).

Sondland said it was “correct” there was a quid pro quo (a “this for that” conditioning).

SCHIFF: The military aid was also an official act … and there was a logjam in which the president would not write that US check, you believed, until Ukraine announced two investigations the president wanted, correct?

SONDLAND: That was my belief. pic.twitter.com/apjXVGcAN6

Schiff then got Sondland to admit the exchange involved an official act.

“You testified that that meeting was conditioned was a quid pro quo for the two investigations the president wanted. Is that right?” Schiff asked again.

“And that everybody knew it,” Schiff shot back.

“Now that White House meeting was gonna be an official meeting between the two presidents?” Schiff pressed.

“It would be an Oval Office meeting, hopefully?” Schiff asked again.

“So an official act?” Schiff asked.

Bribery is one of the offenses the Constitution identifies as an impeachable offense. The meaning of the word in that context is more broadly an abuse of power. What Schiff is asking about is bribery as defined in a criminal statute. Schiff got Sondland to admit to some elements of that statute: a public official, a request or offer, and a connection to an official act, in exchange for President Donald Trump and Rudy Giuliani getting what they wanted (i.e. what they saw as a benefit).

A recent Supreme Court decision is notable context for the criminal bribery statute.

Sondland now admits there was a “quid pro quo” for a White House meeting or call. Notably, in McDonnell v. United States, the Supreme Court held that a meeting or call doesn’t qualify as an “official act” for purposes of a bribery prosecution.

Sondland also went on to testify that he came to believe the congressionally appropriated military aid that was withheld for reasons unexplained was connected to the announcements of investigations.

Although Sondland shed some light on intent, Sondland would not characterize the “thing of value.” 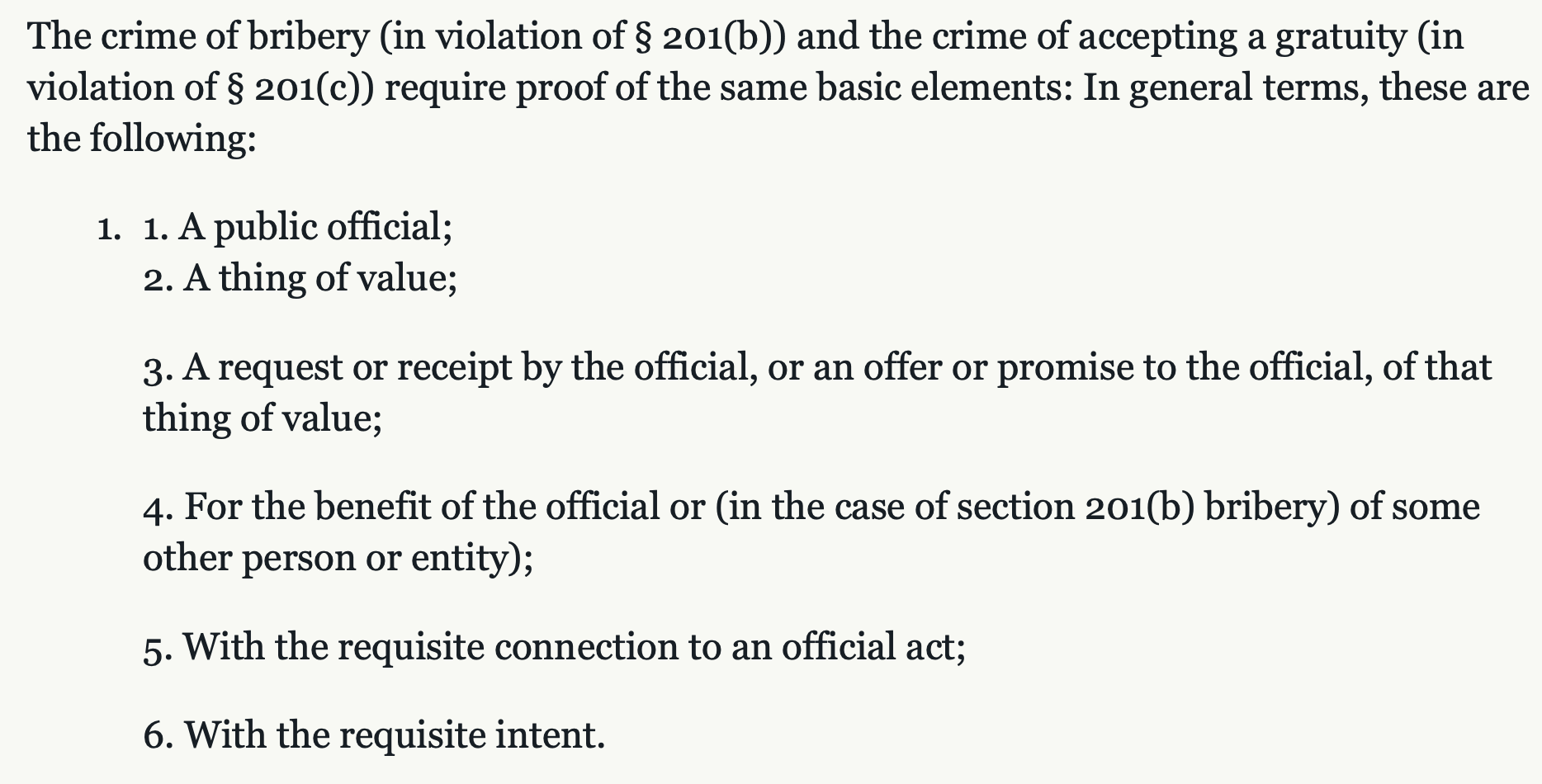 “In order to perform that official act, Donald Trump wanted these two investigations that would help his reelection campaign?’ Schiff asked.

“I can’t characterize why he wanted them, all I can tell you is this is what we heard from Mr. Giuliani,” Sondland said.

Sondland further said that he never heard that the investigations had to start or be completed, just that they had to be announced publicly by Zelensky, suggesting that President Trump was more interested in announcements of politically advantageous investigations than he was in rooting out corruption.

“You had to get those two investigations if that official act was going to take place right?” Schiff asked.

“[Zelensky] had to announce the investigations he didn’t actually have to do them, as I understood it,” Sondland answered.

“I don’t want to characterize whether they are of value, not value. Again through, Mr. Giuliani, we were led to believe that’s what he wanted,” Sondland said.

“And so that official act of that meeting was being conditioned on the performance of these things the president wanted as expressed both directly and indirectly through his lawyer Rudy Giuliani?” Schiff asked.

Former independent counsel Ken Starr said Schiff made clear what articles of impeachment “are being drawn up, if they haven’t been already.”

Ken Starr: "There will be articles of impeachment, I think we've known that … It's over … This is his position, we now know that the president, in fact, committed the crime of bribery … Articles of impeachment are being drawn up if they haven't already been drawn up." pic.twitter.com/82NOwczpej