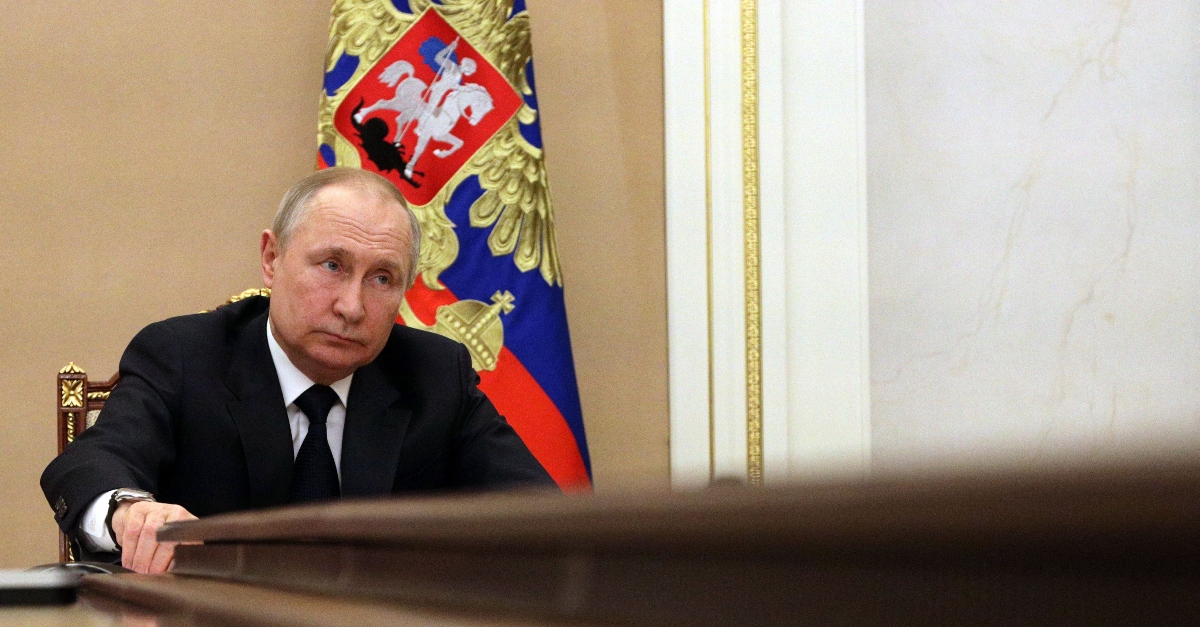 Russian President Vladimir Putin during a teleconference meeting with members of his nation’s government on March 10, 2020.

In March 2022, the White House announced a wide range of sanctions against Russian oligarchs accused of enriching themselves at the expense of the Russian people and providing resources to support President Vladimir Putin’s invasion of Ukraine.

The sanctions against individuals rolled out in March 2022 added to the most comprehensive set of multilateral economic sanctions ever applied to a major global economy, and included a March 24 announcement by the U.S. Department of the Treasury of new sanctions covering 328 members of Russia’s State Duma, the lower house of parliament, as well as other Russian elites and interests.

Many of those sanctioned have had any assets subject to U.S. jurisdiction “blocked,” or frozen, meaning that the sanctioned party cannot have access to those assets until the sanctions are lifted, as a recent Lawfare blog explained. Prior to the March 24 announcement, the U.S. had imposed blocking sanctions on more than 200 Russian entities and individuals, and the European Union had sanctioned more than twice that number.

The U.S. government has used economic sanctions to address national security and foreign policy crises for more than two centuries. During the War of 1812, for example, the secretary of the treasury imposed economic restrictions on Great Britain for its harassment of American sailors. During the Civil War, Congress passed legislation that prohibited transactions with the Confederacy, called for the forfeiture of goods involved in such transactions and provided a licensing regime under rules and regulations administered by Treasury. Today, U.S. economic sanctions are in place targeting more than two dozen countries, in addition to several transnational threats, such as terrorism and weapons of mass destruction proliferation.

The sanctions are legal, rooted primarily in two statutes, the National Emergencies Act and the International Emergency Economic Powers Act (IEEPA). Enacted in 1977, IEEPA authorizes the president to block property, prohibit transactions or otherwise regulate assets in which a foreign person has an interest, in response to the president’s declaration of a national emergency.

Once the names of oligarchs or other parties subject to U.S. sanctions are posted publicly, it’s up to banks and other businesses in the United States to make sure they freeze any property owned by those parties, including assets held under an alias or by an entity 50% or more owned by sanctioned parties.

Blocking sanctions are applied immediately because of the risk that a party subject to such sanctions will seek to move their assets if notified in advance. President Joe Biden’s Feb. 21 executive order, for example, stated that because affected Russians with “constitutional presence in the United States” could “render (these) measures ineffectual” by immediately transferring their assets, “there need be no prior notice of a listing or determination.”

Those impacted by blocking sanctions can contest the sanctions by filing a petition with Treasury’s Office of Foreign Assets Control or in federal court, as IEEPA contemplates the availability of judicial review over sanctions determinations. But over the 45 years since IEEPA was implemented, the government has prevailed in nearly all lawsuits, which typically challenge the constitutionality of these sanctions under the Fourth Amendment, which bars the government from “unreasonable searches and seizures,” and the due process clause of the Fifth Amendment.

The Biden administration has also consolidated federal law enforcement resources to implement the sanctions. On March 2, Attorney General Merrick B. Garland announced the launch of the interagency Task Force KleptoCapture to enforce the sweeping sanctions, export restrictions and economic countermeasures that the United States has imposed. Two weeks later, the U.S. and allied countries launched a global effort to target Russian oligarchs.

Among other things, the mission of Task Force KleptoCapture will include “investigating and prosecuting violations of new and future sanctions” and “using civil and criminal asset forfeiture authorities to seize assets belonging to sanctioned individuals or assets identified as the proceeds of unlawful conduct.” The U.S. Department of Justice (DOJ) announcement on March 2 said that “arrests and prosecution will be sought when supported by the facts and the law” and “asset seizures and civil forfeitures of unlawful proceeds … will be used to deny resources that enable Russian aggression.”

These processes will not be quick. Even civil forfeiture claims, which can proceed against blocked U.S. property, such as houses, yachts or investment accounts, without the owner present in the U.S. or appearing in court, can take several years to play out. As Reuters detailed, the DOJ filed civil forfeiture complaints in July 2016 to recoup more than $1 billion in assets linked to the looting of a Malaysian sovereign wealth fund. Three years later, DOJ reached a $700 million settlement with a Malaysian financier accused of being the mastermind of the scheme.

While Russian oligarchs might not like the freezing of their personal assets in the U.S., the law and prior court cases suggests the oligarchs would likely have little success to contest them and even less ability to recapture assets any time soon.