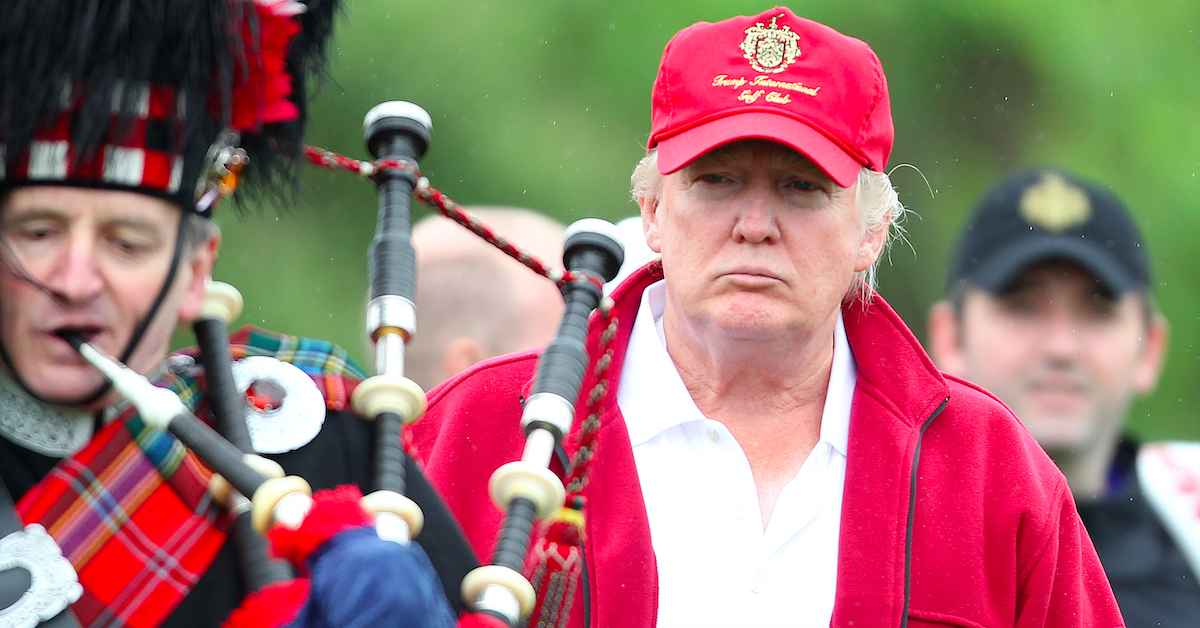 A judge agreed to review Scottish ministers’ refusal to investigate what a U.S. advocacy group describes as former President Donald Trump’s “highly suspicious” transactions on two golf courses in that country to the tune of hundreds of millions of dollars.

In a ruling issued by Scottish Court of Session on Wednesday, Lord Craig Sandison cited the “general and continuing public importance of the legal questions” brought by the Delaware-based group Avaaz, which has been fighting for more than two years to push ministers in that country to pursue an “Unexplained Wealth Order” to illuminate how Trump paid for two golf courses. He reportedly spent more than $300 million in cash to buy and develop Turnberry in Ayrshire and Trump International Golf Links in Aberdeenshire.

Sometimes described as a “McMafia” order, an Unexplained Wealth Order forces disclosure over the source of finances, and Avaaz launched its petition after Scottish ministers refused to pursue one.

Nick Flynn, legal director at Avaaz, applauded the ruling in a press release focusing mainly on the $60 million purchase of Turnberry.

“Today’s win means Scottish Ministers will now be challenged in court over their ongoing failure to seek an Unexplained Wealth Order (‘UWO’) to investigate Trump’s suspicious Turnberry purchase,” Flynn wrote in a statement. “Armed with a proper understanding of the law, we hope that Ministers agree that Trump’s purchase demands the transparency that only a UWO can bring. Scotland’s reputation for upholding the rule of law and combating money laundering depends on it.”

An attorney for the Trump Organization did not immediately respond to an email requesting comment.

In April 2019, Avaaz presented Scottish ministers with a 30-page briefing making their case for such a review.

“Scottish Ministers cannot afford to compromise the sanctity of the rule of law and allow Mr Trump and his associates to undermine Scottish institutions,” the briefing read. “The implications of overlooking the obvious gaps in the funding of the Turnberry purchase are not simply a matter of Scottish national interest, but of global proportions. Money laundering is an international threat leaving in its wake countless victims of robbery, embezzlement, fraud, drug-dealing, sex-trafficking and terrorism.”

Avaaz found allies in the country’s Green party, whose co-leader and Parliamentarian Patrick Harvie urged his fellow lawmakers to investigate exactly how the Trump Organization funded its multi-million dollar Scottish land acquisitions roughly a year later. Harvie argued at the time that there were “reasonable grounds” to suspect the U.S. president has been involved in illegal activity, a claim the then-president’s son Eric Trump called “libelous.”

This past February, the Scottish Green party brought forward a motion calling for the ministers to seek the “McMafia” order against Trump over his acquisition of Turnberry, but Avaaz says that the Scottish National Party (SNP) and Conservatives banded together to amend and water down the motion.

“Scottish Ministers have been turning a blind eye to the cloud of suspicion hanging over Trump Turnberry for far too long,” Flynn added. “The vote in Parliament in February was the perfect chance for Scottish Ministers to bring an end to two years of dithering but the SNP and Tories refused to take it.”

The group says that the judicial review is expected to start later this year at the Court of Session in Edinburgh.

Read the Scottish order below: