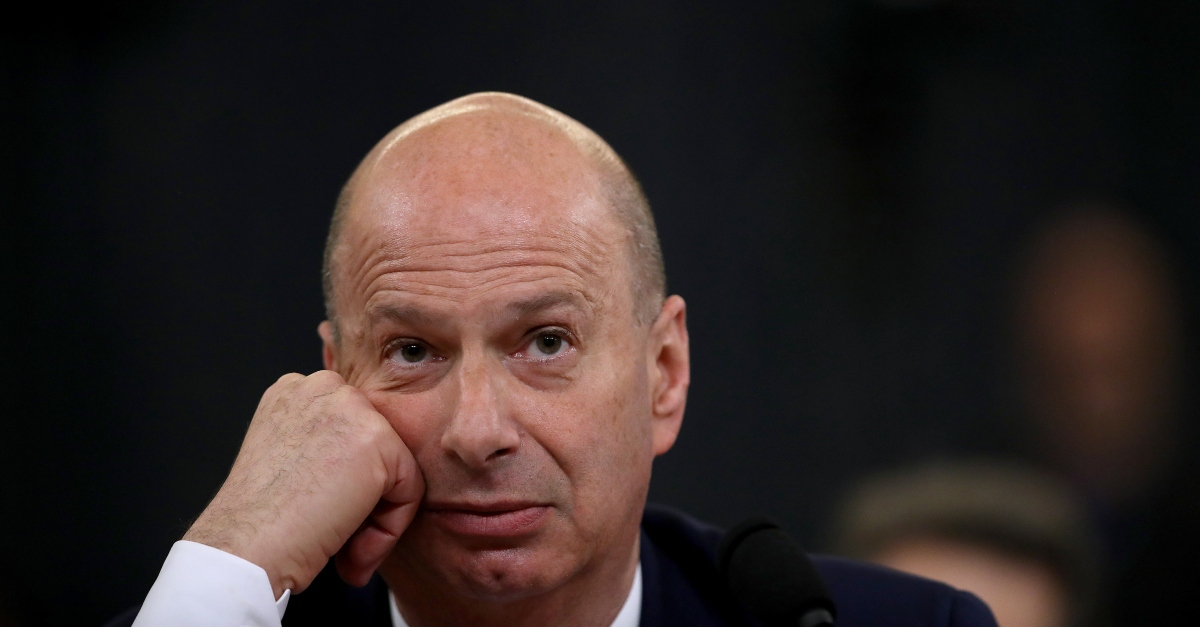 Three women have stepped forward on the record, saying that U.S. Ambassador to the European Union Gordon Sondland made aggressive sexual advances and retaliated against them in separate incidents.

“The fact that [Sondland] uses his power to terrorize people who he perceives as having less power is really disgusting,” one of the women, Natalie Sept, told ProPublica. “I want other women to feel comfortable to share their stories, and be believed.”

Sondland, who has testified in the impeachment inquiry against President Donald Trump, said he believed the allegations were politically motivated. A longtime power player and hotelier in Portland, Oregon, Sondland was a Trump inauguration mega-donor before he became U.S. Ambassador to the EU. His testimony in the impeachment inquiry was widely seen as damaging to the president and the administration.

Sondland has denied each of the allegations against him.

“There has never been mention of them in any form during the 10 to 16 years since they supposedly occurred, although such a complaint could easily have been aired through multiple channels,” he said in a statement. “These false incidents are at odds with my character. It is distressing that this underhanded journalism was initiated by a source angry that I long ago declined to invest in her magazine, the same magazine now presenting its owner’s outlandish claims as if the reporting is somehow objective.”

Sondland’s discussion of a magazine owner is a clear reference to one of the women, Nicole Vogel, owner of the Portland Monthly. She said that she and Sondland had dinner to discuss whether he would invest in her new magazine. According to her story, he said he was considering investing in the company, and said he “was more interested in investing in me, because he felt as if Portland didn’t keep people of high ambition and talent.”

Vogel claimed he invited her to see one of the rooms in a hotel that his company Provenance Hotel Group had acquired. She was going to leave the room when he asked her for a hug, according to her story. She said she gave him a platonic one, but he grabbed her face and tried to kiss her. She put a stop to that, according to her story. Vogel said she discussed this with her sister and a friend after that. They confirmed her account, according to the outlet.

Vogel said she continued to try to do business with Sondland, and scheduled a lunch with him weeks later, but he took her to a restaurant eight miles away even though there were plenty of establishments nearby. According to the story, he put his hand on her thigh for about 10 minutes, and that she put her hand on his hand to stop him from moving up further.

“God, I would love to have told him to shove it,” she said. “To have kneed him in the balls. But I didn’t do that. It was precarious.”

She said that Sondland eventually backed out of investing with her magazine.

Vogel first publicly mentioned her story at a luncheon the day after Sondland’s testimony, mentioned it to an editor at Portland Monthly, and discussed it again at a breakfast event. ProPublica said they and the outlet co-published this new report:

[Editor’s note: Vogel is the owner of Portland Monthly. Vogel cooperated with the story as a source. She was not involved in editorial decisions. The magazine’s editorial team decided to partner with ProPublica to independently report her story.]

Sept and another woman, Jana Solis, had similar stories about Sondland. Sept, a former campaign manager for Portland City Council member Nick Fish, said she met Sondland in 2010. She said she started to trust him, and had dinner at a restaurant to talk about a job at the state film commission, but he began to make romantic advances toward her, escalating until he tried to kiss her. She said she pushed him away. Sept claimed she never heard from him again about the possible job.

Solis, who was a hospitality safety engineer for the insurance company Marsh & McLennan, claimed Sonland slapped her “on the ass” as she was leaving a meeting. Later, he asked her to visit his home to evaluate his art collection. She said she agreed in order to protect the business account, but he approached her in his pool house while he was naked from the waist down. Like the other women, she said she turned him down. Solis also said Sondland forcefully kissed her in another incident.

Her then-husband Kevin Schnabel said that she returned home upset in this later incident.

“One of the things that always stuck in my head is her comment that he literally had his tongue down [her] throat, [and as she was] trying to get away from him she had fallen over the back of the couch,” he said. She also reportedly told him about the pool house incident.

Solis said Sondland started being abrasive regarding work, and eventually left the account. His behavior wasn’t about work, she said. He was mad he didn’t get his way with her, according to her.

“And he was making it all my fault,” she said.