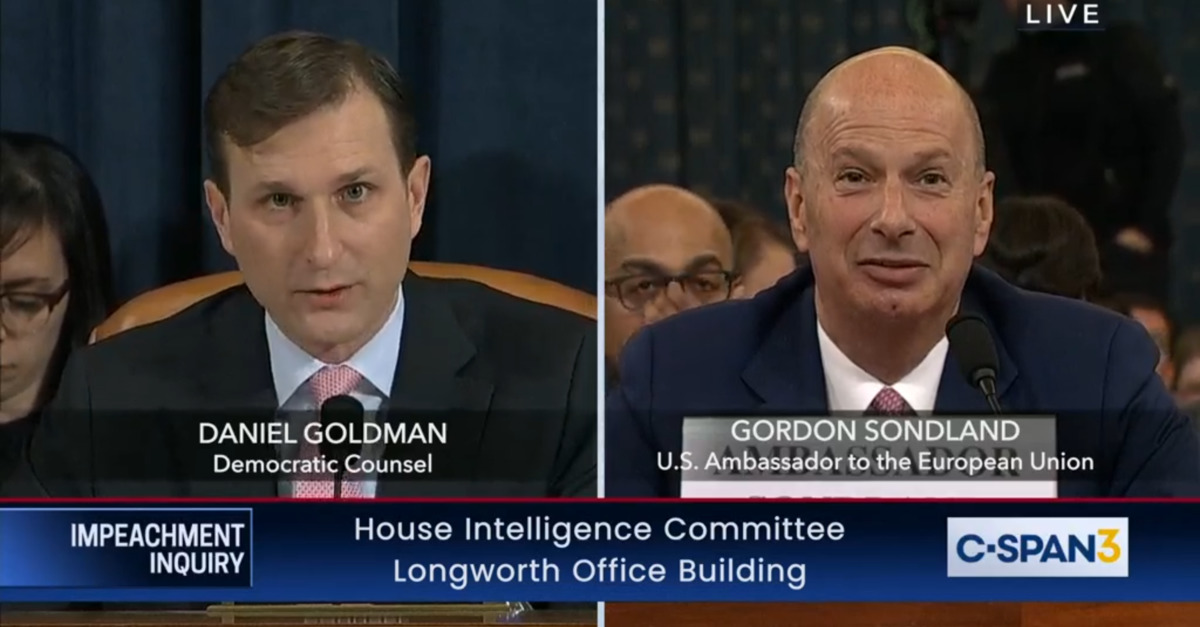 President Donald Trump‘s handpicked Ambassador to the European Union Gordon Sondland gave on Wednesday morning what legal analysts say was a stirring account of the lengths to which the White House and State Department–under the direction of Secretary Mike Pompeo–attempted to obstruct and derail his testimony. After Sondland’s opening statement, however, it was only the 45th president’s preferred narrative that had gone off the rails.

“I agreed to testify because I respect the gravity of the moment and believe I have an obligation to account fully for my role in these events,” Sondland said–noting that he was providing his testimony “despite directives from the White House and the State Department” that he should “refuse to appear” before congressional investigators.

Preemptively addressing potential inconsistencies between his former testimony and the damning indictments delivered via Wednesday’s fireworks, Sondland repeatedly and directly laid the blame at Pompeo’s feet, allegations which have prompted cries that the former congressman engaged in the obstruction of justice.

“I also must acknowledge that this process has been challenging and, in many respects, less than fair,” Sondland wound up. “I have not had access to all of my phone records, State Department emails, and many, many other State Department documents. And I was told I could not work with my EU staff to pull together the relevant files and information. Having access to the State Department materials would have been very helpful to me in trying to reconstruct with whom I spoke and met, and when and what was said.”

My lawyers and I have made multiple requests to the State Department and the White House for these materials. Yet, these materials were not provided to me. And they have also refused to share these materials with [the House Intelligence Committee]. These documents are not classified, and in fairness, should have been made available. In the absence of these materials, my memory has not been perfect.

“Shorter Sondland: the State Department made me lie because they kept all my records,” said former federal prosecutor and Pace Law School scholar Mimi Rocah. “That sounds obstructiony.”

“Clever move by Sondland: blame the Administration withholding documents for his failure to mention the July 26 call before,” he wrote. “Offers an explanation (not super plausible, but an explanation) for not previously mentioning the call, and (rightly) blames Administration for stonewalling.”

“There are additional documents that you’ve been unable to obtain, is that right?” Goldman asked.

“Based on the additional memory that you have gained over the past few weeks–from reading the testimony of others based on their notes and reviewing your own documents–you have remembered a lot more than you did when you were deposed, is that right?” Goldman pressed.

Yep – @danielsgoldman zeroing in obstruction of justice by Pompeo & (& others) by withholding all these documents even from witnesses who needed to refresh their recollection.

Sondland shored up his own position on those potential obstructionist activities by noting that Pompeo was always well aware of the plot engineered by Trump’s personal attorney Rudy Giuliani to leverage U.S. foreign policy in the Ukraine for the president’s own political interests viz. the 2020 election.

Sondland then provided the following exchange from those emails:

“I talked to Zelensky just now. He is prepared to receive POTUS’s call. Will assure him he intends to run a fully transparent investigation and will ‘turn over every stone.’ He would greatly appreciate a call prior to Sunday so that he can put out some media about a ‘friendly and productive call’ (no details) prior to Ukraine election on Sunday.” Chief of Staff Mulvaney responded: ‘I asked the NSC to set it up for tomorrow.’

“Everyone was in the loop,” Sondland continued–blowing up several White House and Executive Branch suggestions and denials to the contrary. “It was no secret. Everyone was informed via email on July 19th–days before the presidential call. As I communicated to the team, I told President Zelensky in advance that assurances to ‘run a fully transparent investigation’ and ‘turn over every stone’ were necessary in his call with President Trump.”

Sondland also described an August 11 email he sent to Pompeo via Kenna:

With the subject: Ukraine, I wrote: “Mike,” referring to Mike Pompeo, “Kurt and I negotiated a statement from Zelensky to be delivered for our review in a day or two. The contents will hopefully make the boss happy enough–the boss being the president–to authorize an invitation. Zelensky plans to have a big presser–press conference–on the openness subject including specifics next week.” All of which referred to the 2016 [allegations of election interference] and the Burisma [investigation concerning Hunter Biden].

Ms. Kenna replied: “Gordon, I’ll pass to the secretary, thank you.” Again, everyone was in the loop.

House Intelligence Committee Chairman Rep. Adam Schiff (D-Calif.) contextualized Sondland’s testimony and previewed what is likely to be a new line of inquiry for impeachment investigators.

“This, I think, only goes to underscore just how significant the president’s obstruction of this investigation has been,” Schiff noted. “We now can see the veneer has been torn away, just why Secretary Pompeo and Donald Trump do not want any of these documents provided to Congress.”