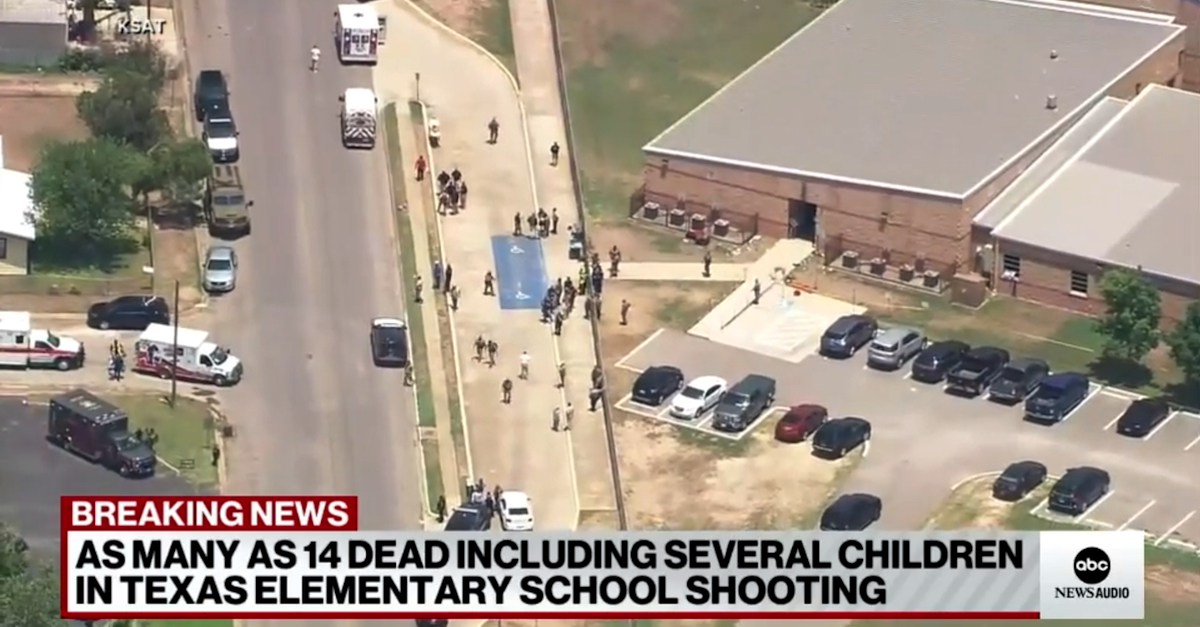 An 18-year-old high school student in Texas is believed to have shot his grandmother before going to a nearby elementary school, abandoning his car, and then killing multiple students and at least one teacher.

The death toll changed, changed again, and then changed several more times as information filtered from law enforcement sources to various elected officials who in turn repeated it to the press.

The most recent estimate of the death toll, according to an assessment given to CNN by Sgt. Erick Estrada of the Texas Department of Public Safety, was that 19 students and two adults had been killed, plus the shooter.

State Sen. Roland Gutierrez (D) told CNN earlier in the evening that 18 children and three adults had died; that number may have included the shooter and may not have accounted for an additional child who succumbed.

Texas Gov. Greg Abbott said in the early stages of the investigation on Tuesday afternoon that the shooter, whom he and other authorities identified as Salvador Rolando Ramos, a U.S. citizen, was dead.  When the governor released initial details on the shooting, the number of children killed was 14.

Ramos also wounded two officers, the governor said, but their injuries are not reportedly life threatening. Police officers are believed to have killed Ramos.

The identities of the victims have not been officially released.

Texans are grieving for the victims of this senseless crime & for the community of Uvalde.

Cecilia & I mourn this horrific loss & urge all Texans to come together.

“There is an active shooter at Robb Elementary,” the Uvalde Consolidated Independent School District tweeted at 12:17 p.m. Central time on Tuesday, May 24.

There is an active shooter at Robb Elementary. Law enforcement is on site. Your cooperation is needed at this time by not visiting the campus. As soon as more information is gathered it will be shared.

The rest of the district is under a Secure Status.

The school is about an hour and a half due west of San Antonio. It is midway between the latter city and the Mexican border town of Del Rio.

Uvalde Memorial Hospital wrote on Facebook that it “received 13 children via ambulance or buses for treatment.”

“Two children have been transferred to San Antonio and one child is pending transfer,” the hospital also said early in the afternoon.  “Two individuals that arrived at UMH were deceased. No details are available. Please refrain from coming to the hospital at this time.”

The hospital initially posted that immediate family members of the patients being treated could assemble in a hospital cafeteria and that staff would be in “constant communication” with relatives.

By Tuesday evening, the hospital was asking for emergency blood donations.

University Health in San Antonio tweeted that it received two patients: a 10-year-old girl and a 66-year-old woman. Both were in critical condition, the hospital said after assessing their medical status.

Update on the shooting at Robb Elementary School in Uvalde: at University Hospital, one patient, a 66-year-old woman, is in critical condition.

The other patient is a 10-year-old girl, also in critical condition.

Later in the evening, the hospital said it had received a third patient who it described as being in good condition.

The Uvadale Police Department said during a brief and hasty press conference during the afternoon that the school housed second, third, and fourth-grade students.  The police said the suspect was dead and had acted alone.

Before announcing that he was dead, the police said the shooter was “in Police Custody” as of 1:06.

“Where in God’s name is our backbone to have the courage to deal with and stand up to the lobbies?” Biden asked.

“I am sick and tired of it,” the president said of mass shootings.  “We have to act. And don’t tell me we can’t have an impact on this carnage.”

Attorney General Merrick Garland called the incident an “act of unspeakable violence” that “has devastated an entire community and shaken our country.”

“FBI and ATF agents have responded to the scene, and the Justice Department is committed to providing our full support to our law enforcement partners on the ground in Texas and to the Uvalde community,” Garland said.  “We join our fellow Americans in mourning this terrible loss and in their resolve to end this senseless violence.”

This is a developing story.  It has been updated multiple times as additional details have been released, and it may be updated again.

[Editor’s note:  the spelling of the shooter’s last name has been corrected to “Ramos.”  The governor originally pronounced it as “Romas.”]