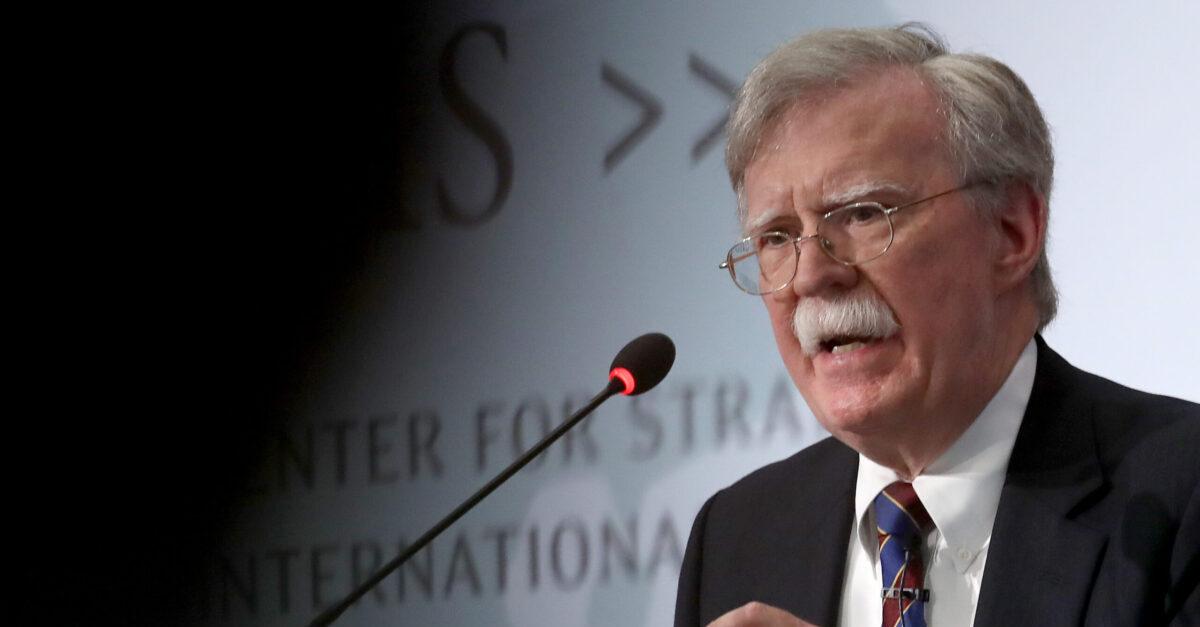 Former Ambassador and National Security Advisor John Bolton is hoping the First Amendment saves him from claims by the government that he violated his own nondisclosure agreements and should therefore be penalized for publishing his recent memoir about President Donald Trump’s White House.

A 44-page motion to dismiss “all claims” against Bolton, filed by his attorneys late Thursday in Federal District Court in Washington, D.C., leans heavily of the right to speak freely about matters of political importance in its opening paragraphs and subsequent arguments.

“Speech on a politically important and controversial topic ‘is the essence of First Amendment expression,” the motion begins. “No form of speech is entitled to greater constitutional protection.”

Bolton’s motion comes after a federal district court judge ruled in late June that Bolton could publish his book as a matter of First Amendment law — but that Bolton had “gambled with the national security of the United States,” “exposed his country to harm,” and furthermore exposed “himself to civil (and potentially criminal) liability.” Bolton, with his book now for sale worldwide, argues he should face no liability at all. (Given the federal judge’s June rebuke of Bolton, which called Bolton’s tactics a gamble, some aren’t so sure these arguments will work.) Still, Bolton’s motion takes aim at the government’s use of nondisclosure agreements to prevent officials from speaking about how public business is conducted.

“When the Government erects a scheme designed to foreclose that speech even before it is uttered by imposing a prior restraint upon the communication of news and commentary on current events, it must shoulder a heavy burden of showing justification for the imposition of such a restraint,” the document goes on to say (internal citations and punctuation omitted). “And it has been settled since the Early Republic that the Government cannot escape First Amendment scrutiny by switching to the tactic of punishing core political speech after the fact.”

That line is aimed at government claims that Bolton should be forced to forego royalties or even be punished criminally for publishing his book, The Room Where It Happened: A White House Memoir.

“[A] law inflicting penalties on printed publications, would have a similar effect with a law authorizing a previous restraint on them,” Bolton’s motion then says, quoting James Madison, the author of the First Amendment. “It would seem a mockery to say, that no law should be passed, preventing publications from being made, but that laws might be passed for punishing them in case they should be made.”

The Bolton motion invites the D.C. District Court to “not forget these bedrock constitutional principles in evaluating the Government’s attempt in this case to punish the President’s former National Security Advisor, Defendant John R. Bolton, for publishing speech that is embarrassing to the President.”

The Bolton motion invoked previous arguments that a nearly four-month pre-publication government review of Bolton’s book ferreted out classified information, that Bolton was free to publish, and that the Trump White House continued to assert that classified information existed in the book merely to prevent it from being published.  To that end, Bolton’s motion asserts that neither of his own nondisclosure agreements “imposes on a former government employee any obligation—none at all—to submit for prepublication review”:

The Government’s claims are all foreclosed by the text of the very contractual documents upon which they purport to be based, since those contracts simply cannot reasonably be interpreted as imposing the contractual duty that the Government claims Ambassador Bolton breached: the duty to submit to prepublication review, and await written authorization before publishing, a book that he had no reason whatsoever to believe contained any classified material. And even if those contracts were susceptible to an interpretation imposing such a requirement—in effect, a blanket prior restraint of virtually any speech by former government employees—that requirement would be flatly contrary to the First Amendment. The Court thus labors under the solemn constitutional duty to avoid interpreting the contracts, if at all possible, as imposing such a blanket prior restraint—and if such an interpretation is not possible, the even more solemn duty to invalidate that plainly unconstitutional requirement.

The motion concludes that even if the government’s interpretations of Bolston’s so-called Sensitive Compartmented Information Nondisclosure Agreement (SCI NDA) are true, they do not stand in the face of the First Amendment.

READ Bolton’s arguments in the document below:

John Bolton Motion to Dismiss by Law&Crime on Scribd