Mississippi Atheists Sue Over 'In God We Trust' License Plates 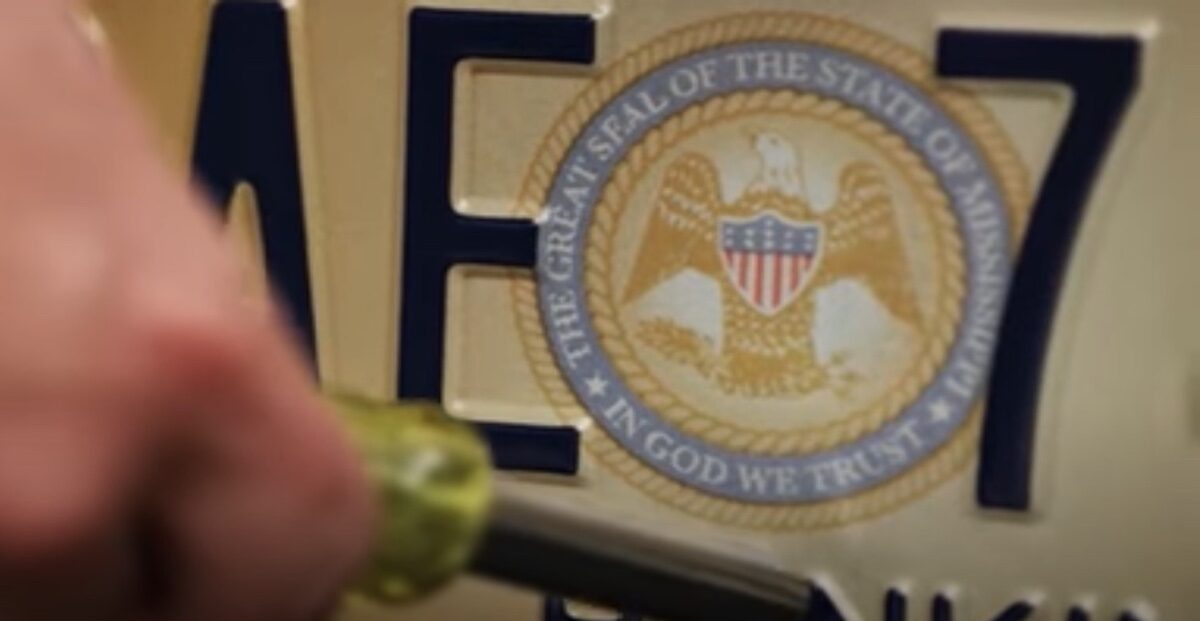 Mississippi car owners and nonreligious advocacy groups have sued the state over its inclusion of the phrase “In God We Trust” on the state’s standard-issue license plates, claiming that the practice violates their First Amendment free speech and free exercise rights.

Jason Alan Griggs, Derenda Hancock, and Leslie Kim Gibson, along with the groups American Atheists and the Mississippi Humanist Association, filed the complaint in federal court on Tuesday. Griggs, Hancock, and Gibson are all nonreligious Mississippi residents; Griggs and Gibson’s vehicles bear license plates emblazoned with the state seal, which contains the phrase “In God We Trust,” and Hancock paid additional fees to get a specialty tag on both her vehicles. According to the complaint, the plaintiffs believe they are essentially being forced to carry and display a religious message with which they disagree, or else pay a fine.

“No state may force a person to be a mouthpiece for the government’s preferred message,” the complaint begins. “This freedom from compelled speech is a foundational tenet of American society. Yet the State of Mississippi demands exactly that from every single car owner in the state. In so doing, the state is violating of  nearly a century of settled First Amendment law.”

“This is an action challenging the [state’s licensing practices] that together require Mississippi’s nonreligious drivers to display the government’s preferred ideological, religious message on their vehicles or, if they refuse to do so, pay higher fees to legally drive their vehicles,” the complaint later says.

In 2014, the Mississippi state seal was changed to include the phrase “In God We Trust” in an effort led by then-state Senator Michael Watson, Jr., and supported by then-Governor Phil Bryant.

Under Mississippi’s current license plate system, the standard tag includes an image of the state seal, according to the state’s Department of Revenue. For a fee, car owners can instead obtain specialty plates, many of which do not include the state seal. Most fees for plates are around $30, although some are more than $50, according to the DOR.

However, some disabled drivers, along with drivers of RVs, trailers, or motorcycles, don’t always qualify for an alternate plate, and must display a tag on the license plate with the standard design.

In addition, any vanity plate, where the car owner chooses a combination of numbers and/or letters to display, is issued only on the standard license plate, meaning that any car owner with a personalized license plate must also display the seal and phrase.

The car owners and organizations say that the state’s license plate program violates the First Amendment right to free speech by compelling them to send a message in which they do not believe.

“[The plaintiffs] have been and will be forced to continuously deliver the State of Mississippi’s ideological message by displaying a license tag derived from the current Standard Tag design at all times either because they own trailers, motorcycles, and RVs, or because they are disabled and do not qualify for a disabled variant of an Alternate Tag,” the complaint says. “They risk criminal penalty if they remove or obscure any character of the license tag.”

In Mississippi, covering or defacing any part of a license plate that obscures any characters on is a misdemeanor punishable by a fine of up to $25, and the placement of the state seal and phrase on the license plate makes it virtually impossible to cover “In God We Trust” without also covering the license plate letters or numbers.

The complaint also says that the licensing scheme is a violation of the First Amendment’s free exercise clause, which “prohibits the government from favoring or disfavoring particular religious beliefs or the lack thereof.”

The current licensing practices in Mississippi “are not neutral,” the complaint says. “Not only is ‘In God We Trust’ an expressly religious message, but the public statements of Mississippi officials, including former Governor Phil Bryant, Governor Tate Reeves, former state senator Michael Watson, Jr., and others, demonstrate that hostility toward the Plaintiffs and other Mississippi car owners who lack religious beliefs was a motivation for selection the current Standard Tag Design.”

Mississippi Gov. Tate Reeves (R) appears to have responded to the lawsuit by re-upping a campaign ad from 2019, in which he defiantly attaches a state license plate with the phrase to his car.

I know Mississippi’s values are our strength…and I meant it when I said as Governor I would defend our values every single day!
I will defend “In God We Trust” on our tag, on our flag, and on our state seal….Every. Single. Day. pic.twitter.com/6kYoKOZ7F6

“I know Mississippi’s values are Mississippi’s strength,” Reeves added. “Our next governor must defend our values every single day.”

“We thank Governor Reeves for again demonstrating that the state intended to send a substantive message by placing the motto on the standard license plate design, thereby supporting our compelled speech claim,” Geoffrey Blackwell, litigation counsel for American Atheists, told Law&Crime. “We appreciate his assistance.”

The governor’s office did not immediately respond to Law&Crime’s request for comment.

License plate lawsuits have been on the uptick recently — especially in the realm of vanity plates. A federal judge last year agreed with the ACLU in a Rhode Island lawsuit which challenged the Ocean State’s ban on “offensive” terms in vanity license plates.  A federal judge in California ruled similarly last year as well — thus striking down the Golden State’s ban on what the Los Angeles Times referred to as “racy” or “offensive” vanity plates.  In 2014, the New Hampshire Supreme Court ruled in favor of a citizen who was denied a vanity plate registration for the phrase “COPSLIE.”  The court in that case dodged the constitutional issue presented by the speech itself by ruling that an underlying administrative rule banning phrases “offensive to good taste” was too arbitrary to enforce.  But the court also suggested — in what may be quickly becoming a minority viewpoint — that license plates were primarily venues for government speech, not motorist speech.  Thus, the justices expressed “skepticism” toward the underlying claim that the constitution allowed motorists to order custom plates adorned with whatever message they preferred.

More on point, however, the U.S. Supreme Court held as far back as 1977 that a state could not force its citizens to display a state motto on license plates attached to personal vehicles.  In that case, Wooley v. Maynard, Jehovah’s Witnesses in New Hampshire obstructed the state motto “Live Free or Die” from their license plates and cited religious reservations with the message as their rationale for so doing.  The Jehovah’s Witnesses were prosecuted by state authorities but eventually prevailed before the U.S. Supreme Court on First Amendment grounds.

“New Hampshire’s statute in effect requires that appellees use their private property as a ‘mobile billboard’ for the State’s ideological message — or suffer a penalty, as Maynard already has,” then-Chief Justice Warren E. Burger wrote while ruling for the Jehovah’s Witnesses and against the state.

[Image via screengrab from Tate Reeves/YouTube]