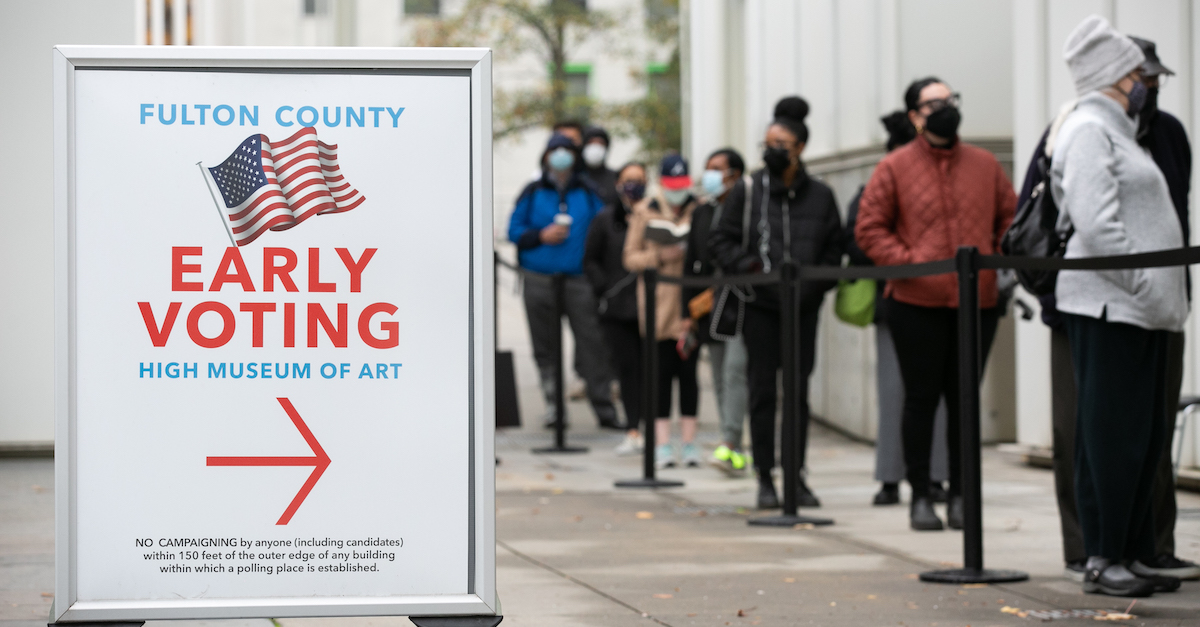 Voters line up for the first day of early voting outside of the High Museum polling station on December 14, 2020 in Atlanta, Georgia.

A federal district court judge on Wednesday declined to enjoin the enforcement of some of Georgia’s new voting regulations in the days leading up to runoff elections in the Peach State. Those elections will occur on Tuesday, July 13.

Judge J. P. Boulee, a Donald Trump appointee in the Northern District of Georgia, was unpersuaded by one group of plaintiffs who pressed claims that the new regulations violated the U.S. Constitution or the Voting Rights Act. Specifically, Judge Boulee refused to block the laws from taking force because the election is just around the corner.

The new laws, mostly known by their legislative moniker SB 202, have been widely criticized as restrictions on the right to vote.  Some with the ACLU have said the measures were “driven by blatant racism.”

The plaintiffs in the instant—and thus far, failed—case did not use such loaded language, but they did loftily plea for Judge Boulee to “restore the sovereignty of the people of Georgia over their own elections.”

“Liberty requires at least three essential things—an unfettered right to vote, freedom of speech, and the meaningful separation of powers,” the original complaint proclaimed.  “This lawsuit is necessary to preserve individual constitutional rights, and constitutional government, against the attacks that SB 202 makes on these three pillars of liberty.”  It further asserted:

With the adoption of Senate Bill 202 (Act 9), the government of the State of Georgia has not only imposed burdens on the constitutional rights of individual voters, but it has also subordinated a previously accountable system of election administration by local officials to the arbitrary powers of a single state agency, the State Election Board (the “SEB”)—an agency that is both newly empowered to intervene in and take over the local conduct of elections and (what is worse) newly insulated, by statutory design, from any effective external source of timely oversight capable of constraining its abuses.

The plaintiffs, which included a county Democratic Party committee and others, asked Judge Boulee for a preliminary injunction against the implementation of several provisions of SB 202.  Those measures were known generally as the “observation rule” (which forbids a person from looking at another’s vote); the “photography rule” (which forbids the making of images of a ballot while a voter is filling it out or after it is completed); the “communication rule” (which bans election monitors from sharing “any information that they see . . . about any ballot, vote, or selection to anyone other than an election official”); the “tally rule” (which bans counting or estimating the number of absentee ballots cast until after polls close on election day); and the “ballot application rule” (which limits the window during which absentee ballots can be requested to between 78 and 11 days before an election).

Judge Boulee did not agree that those provisions of SB 202 needed to be temporarily rubbished via judicial decree — largely based on the ticking of the clock.

“[T]he Court finds that the timing of Plaintiffs’ Motion presents a significant problem with respect to the July 13, 2021 elections,” Boulee wrote. “This is the case because the underlying elections have already occurred, and Plaintiffs seek an order that would mandate different rules for the related runoff elections. In other words, the proposed injunction . . . would change the election administration rules for elections that are already underway.”

Boulee said siding with the plaintiffs and blocking the implementation of the allegedly offending portions of SB 202 would violate precedent set down by the U.S. Supreme Court: Purcell v. Gonzalez, the 2006 case discouraging courts from altering rules on the eve of an election. The Purcell principle, as the precedent became known, was also cited against Trump in post-election litigation.

But Boulee also noted that the challenged portions SB 202 took effect on March 25, 2021 and July 1, 2021 — right in the middle of the election cycle which includes the July 13 runoffs.

“The underlying elections occurred on June 15, 2021,” Boulee remarked earlier in the opinion.

In other words, the original elections occurred before SB 202 took effect.

Judge Boulee continued his analysis with almost an entire page of findings which did not cite a single legal authority.

Plaintiffs’ response that State Defendants are ill-prepared to administer the new rules does not change the fact that election administrators have prepared to implement the challenged rules, have implemented them at least to some extent and now would have to grapple with a different set of rules in the middle of the election.

Further, even if there is some merit to Plaintiffs’ argument that State Defendants overstate the election disruption risk where Plaintiffs seek only to prevent the enforcement of criminal statutes in an area that the state already regulates sufficiently, this argument ignores the Ballot Application Rule, which is not a criminal statute and does affect the administration of the election. The other challenged rules also impact election processes, including how election observers and monitors may discharge their oversight responsibilities while the election is ongoing.

Finally, Plaintiffs waited almost three months after SB 202 passed and until the eve before the underlying election to file their Motion. Notwithstanding the expedited briefing and argument schedule, we are at the juncture where all of the challenged provisions are already the law. Therefore, an injunction would not merely preserve the status quo; rather, it would change the law in the ninth inning. Because “a party requesting a preliminary injunction must generally show reasonable diligence,” Plaintiffs’ delay also weighs against issuing an injunction.

The final quote therein is from a 2018 U.S. Supreme Court case — the first authority cited after that more than one page of discussion.

Judge Boulee continued with a tacit nod to the plaintiffs’ ideas — while ruling against them:

The Court certainly appreciates the gravity of the First and Fourteenth Amendment harms Plaintiffs have alleged. Our nation has “‘a profound . . . commitment to the principle that debate on public issues should be uninhibited, robust, and wide-open.” Anderson v. Celebrezze, 460 U.S. 780, 794 (1983). “It is [also] beyond cavil that ‘voting is of the most fundamental significance under our constitutional structure.’” Burdick v. Takushi, 504 U.S. 428, 433 (1992).

However, the Court finds that the significant Purcell concerns in this case with respect to the July 13, 2021 runoff elections, including the risk of disrupting the administration of an ongoing election, outweigh the alleged harm to Plaintiffs at this time. For the same reasons, an injunction would not serve the public’s interest. Therefore, Plaintiffs cannot satisfy the third and fourth prongs of the preliminary injunction test with respect to that election.

Proponents of the new laws have said the measures will make voting more secure and actually expands voting access.

The U.S. Department of Justice also recently filed a lawsuit against SB 202.  Georgia Gov. Brian Kemp (R) called that move a “politically motivated assault on the rule of law and our democracy.”  Kemp, who has long supported the measure, also recently shared polling data which suggested “a majority of Georgia voters approve of key provisions” of SB 202.

Read the entire order below: