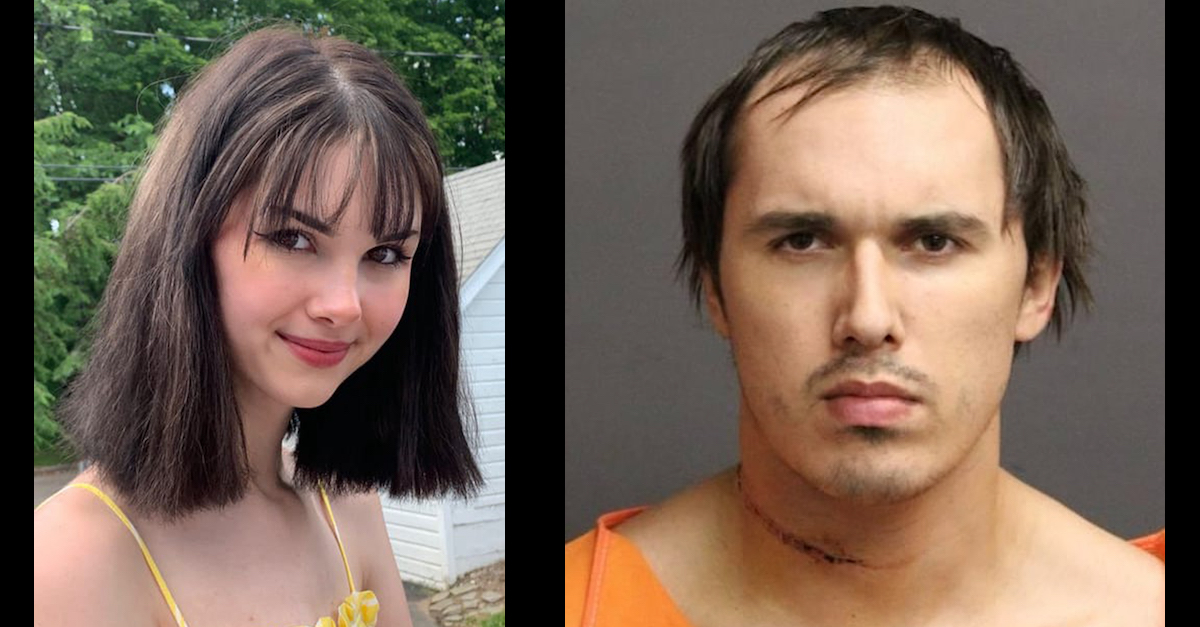 The family of teen murder victim Bianca Devins on Thursday filed a civil lawsuit against the very same prosecutors who secured a conviction against the teen’s admitted killer. According to the lawsuit, those prosecutors provided nude photos of the victim and videos depicting both sex acts and her subsequent murder to filmmakers — apparently in response to New York State’s Freedom of Information Law (FOIL). The lawsuit says the prosecutors who transmitted the disturbing footage violated federal laws which ban the transmission of child pornography. And a federal judge says he wants answers.

Brandon Clark pleaded guilty to stabbing Devins, 17, on July 14, 2019, in Utica, N.Y. for reportedly kissing another man after all three attended a New York City-area concert. Clark immediately shared images of Devins’ body on social media. Clark was sentenced to serve 25 years to life in a New York State prison despite attempting to claw back his guilty plea.

The Thursday lawsuit blames prosecutors for spreading some of that imagery — including video recordings Clark made of himself having sex with Devins and then murdering her.

“This is a case about the Oneida County District Attorney’s Office unconscionable dissemination of snuff and child pornography of a 17-year-old murder victim,” the lawsuit alleges. “To the horror of Kimberly Devins, Bianca’s mother, two sets of documentary makers informed her the District Attorney’s office had given them the sex and murder videos.”

The lawsuit continues at length:

In an apparent act of retaliation, the Utica Police Department and Oneida County District Attorney’s Office withdrew its offer to share evidence with Bianca’s own family and told them they could make a motion to the criminal court that had already sentenced Clark and where the family had no standing. To date, Bianca’s own mother has not seen the horrifying videos of her daughter’s last moments on earth, she seemingly being the only one so restricted.

On June 28, 2021, Kimberly Devins learned that Oneida County had responded to the FOIL requests of Alissa Tallman aka Antimone Layne, a YouTuber and confidante of Clark’s, by sending Layne material that included the sex and murder videos as well as the contents of Bianca’s phone which contained nude images and videos of Bianca and that violated our federal child pornography laws to share or possess.

The Oneida County District Attorney’s Office has acted unconscionably and lawlessly toward Bianca, committing new crimes against her.

By releasing the murder video and child pornography to the media and the public the DA’s Office has further devastated the legacy of Bianca Devins.

Among the further accusations in the lawsuit is that a Pennsylvania YouTuber named Alissa Tallman, who also goes by the name Antimone Layne, became close to Clark. Clark provided Tallman with many details of the killing, which Tallman shared in more than 2,000 minutes of videos, the lawsuit says. Network producers befriended Tallman. Per the lawsuit, producers with A&E even “presented [Tallman] with a contract binding her to participate in” a production of their own. The lawsuit says the A&E crew “nudged” Tallman “to convince Clark to withdraw his guilty plea, a trial making for a much splashier documentary.”

Such exclusivity contracts are not uncommon and are quite standard for any subjects involved in documentary film productions.

The lawsuit goes on to allege that prosecutors “enthusiastically” began “turning over even illegal evidence . . . that exploited Bianca’s privacy and rights, not to mention federal child pornography laws.”

“Producers at both 48 Hours and A&E informed Kimberly [Devins’ mother] that they possessed the murder video, sex videos, and nude photos from Bianca’s phone,” the lawsuit says. “When confronted, Assistant District Attorneys Sarah DeMellier and Michael Nolan admitted the DA’s office had shared the content.”

The lawsuit says other networks, including MTV and NBC’s Peacock TV, were also pursuing films about the case.

Industry sources tell Law&Crime that several staffers connected to A&E were involved with a project about the Devins case as an outside endeavor, but it was ultimately dropped. It is unclear if any of the other projects named in the lawsuit remain on track.

The lawsuit further accuses police officers while out “at a local tavern” of “sharing body cam footage from the crime scene depicting officers fighting Clark” with “Bianca’s body visible in the background.”

The documents say the Devins family was blocked from obtaining the footage while others were supposedly provided access to it. The DA’s office, according to the lawsuit, danced around whether its alleged release of the information was pursuant to New York’s FOIL law or whether it was not. Specifically:

On March 22, 2021, counsel for the Estate of Bianca Devins sent another letter to District Attorney McNamara grieving his failure to respond to the February letter and stating again that the office should not respond to FOIL requests by sending out the sex and murder content.

On March 22, 2021, Assistant District Attorney DeMellier responded by email stating that the Oneida County District Attorney’s Office “will not be providing as part of any FOIL request the still images or video of Bianca and Brandon engaging in sexual intercourse or Brandon’s commission of the homicide.”

On March 24, 2021, with the sentencing behind them, Kimberly Devins tried once again to make an appointment with law enforcers to view the horrific evidence of her daughter’s final moments. She was forwarded to Utica’s City Corporation Counsel Office, who over the course of many emails and calls informed her that they did not want to share the evidence with her. The reason cited was their belief that she was interested in suing Facebook and Instagram and they “didn’t want to be involved.”

On June 29, 2021, Clark’s aunt, Regina Kewalski, notified Kimberly to warn Kimberly about disturbing news – that the DA’s office had responded to Layne’s FOIL request and included the sex videos, the murder videos, still shots of both, and contents extracted from Bianca’s phone.

The 22-page complaint, filed in U.S. District Court for the Northern District of New York, is followed by dozens of subsequent pages of affidavits and supporting documents. It alleges the following four causes of action: (1) violations of 18 U.S.C. § 2252A (a federal child pornography statute) (all defendants); (2) claims attached to 18 U.S.C § 2255 (a federal statute allowing civil remedies for personal injuries) (all defendants); (3) common-law negligence (all defendants); and (4) negligent supervision (against defendant Oneida County).

The lawsuit seeks a litany of damages: compensatory damages; punitive damages under federal and state law; actual or liquidated damages of $150,000 “per image for each incident of dissemination;” attorneys’ fees; costs; and “all other damages, penalties, costs, interest, and attorneys’ fees” allowable under several state and federal laws. It also asks for a “temporary, preliminary, and permanent” injunctions banning “all Defendants from further dissemination of content depicting Bianca Devins.”

The Oneida County District Attorney’s office did not respond to a telephone call or an email seeking comment.

The judge assigned to the case issued an almost immediate order on July 15th which denied the Devins family’s request to issue a temporary restraining order without notice to the defendants and reserving a decision on a preliminary injunction.

But the judge, Glenn T. Suddaby, a George W. Bush appointee, also zeroed in on an issue the case admittedly presents: New York’s state-level child pornography laws apply to a minor under 17, as the prosecutor’s office told Devins’ family (according to the lawsuit). That would mean, according to them as per the lawsuit, that New York laws do not protect Devins, who was 17 when she died. But federal laws apply to individuals under 18 — and thus protect Devins.

Judge Suddaby wanted prosecutors to answer for this. Per his order:

Read the Devins lawsuit below:

Read other legal documents filed by the plaintiffs below:

Disclosure: Law&Crime is owned in part by A&E.

[image of Bianca Devins via her family; image of Brandon Clark via an Oneida County, N.Y. jail mugshot]