A 20-year-old woman says that four Delaware police officers threatened her, assaulted her, damaged her car, and left her traumatized—and it all apparently turned out to be a case of mistaken identity.

Now, Martiayna Watson says she wants the officers to be held accountable, and she’s seeking that accountability by way of a federal lawsuit. She’s suing the Delaware State Police, the state of Delaware, and the Department of Homeland Security, alleging civil rights violations including excessive force, false arrest/false imprisonment, assault and battery, negligence, and reckless conduct.

According to Watson’s complaint, filed Wednesday in the U.S. District Court in Delaware, she had just left a gas station in Wilmington shortly before 5:30 p.m. on June 24 when she noticed a car following slowly behind her. Martiayna, who is Black and drives a light grey Nissan Maxima, would later discover that the car behind her was being driven by a plainclothes Delaware police officer. She would also later learn that officers at the time were allegedly searching for a Black male and female in a dark gray Nissan Maxima. 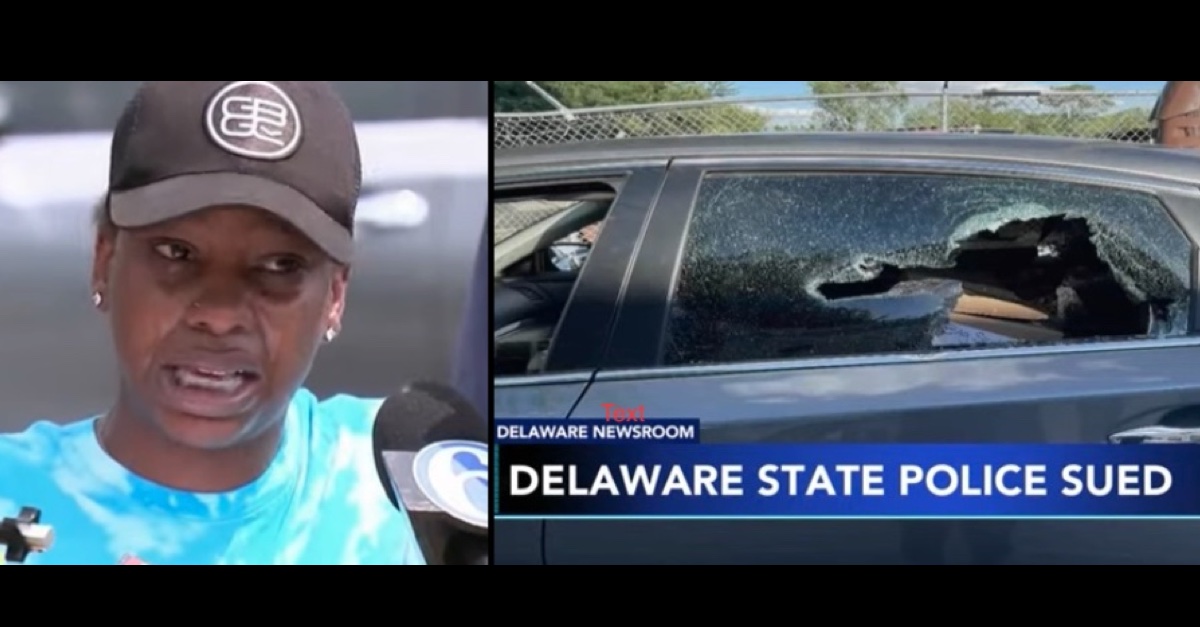 “Suddenly and without warning, [the car] cut off Plaintiff’s vehicle by aggressively swerving in front of her, blocking her lane of travel,” the complaint says. “Almost simultaneously, a second vehicle driven by Defendant’s officer (“Vehicle 2”) hit Plaintiff’s vehicle from behind.”

The complaint goes on to say that two other cars, which also turned out to be unmarked police cars, pulled up to either side of Watson’s car, blocking her in.

“The four officers who were operating the four unmarked police vehicles exited their vehicles with their guns drawn, pointing directly at Plaintiff,” the complaint said.

Watson, whose front two windows were completely rolled down, asked what was happening, at which point, according to the complaint, the officers told her to “Stop talking, and shut the fuck up!”

After one officer announced that there was no one else in the car (remember, the police were reportedly searching for two people in a dark grey Maxima), one of the officers broke the driver’s side rear window of Watson’s car.

An officer then opened the driver’s side front door of Watson’s car and “dragged her out of the car with force and aggression.”

“When Plaintiff began to cry and ask again what was going on, one of the Defendant’s officers put a taser to her neck and said, ‘I’m going to fuck you up,’” the complaint says.

Eventually, according to the complaint, one of the officers said “I think we have the wrong person.” The officers then “abruptly got back in their vehicles and drove away, without even issuing Plaintiff an apology for their aggressive treatment, wrongful arrest and unlawful detainment,” the plaintiff claims.

At a press conference on Thursday, a visibly shaken Watson said that she just wants answers, according to a report by 6ABC WPVI.

“I just really want to get to the bottom of this and I want the officers to be held accountable,” Watson said.

She thought she was about to be kidnapped, according to a report by Delaware Online.

“I can’t even drive without thinking something is going to happen to me,” Watson said. “I’m so scared, and I did nothing wrong.”