Katie Hill's Nudes Were 'a Matter of Public Concern': Court 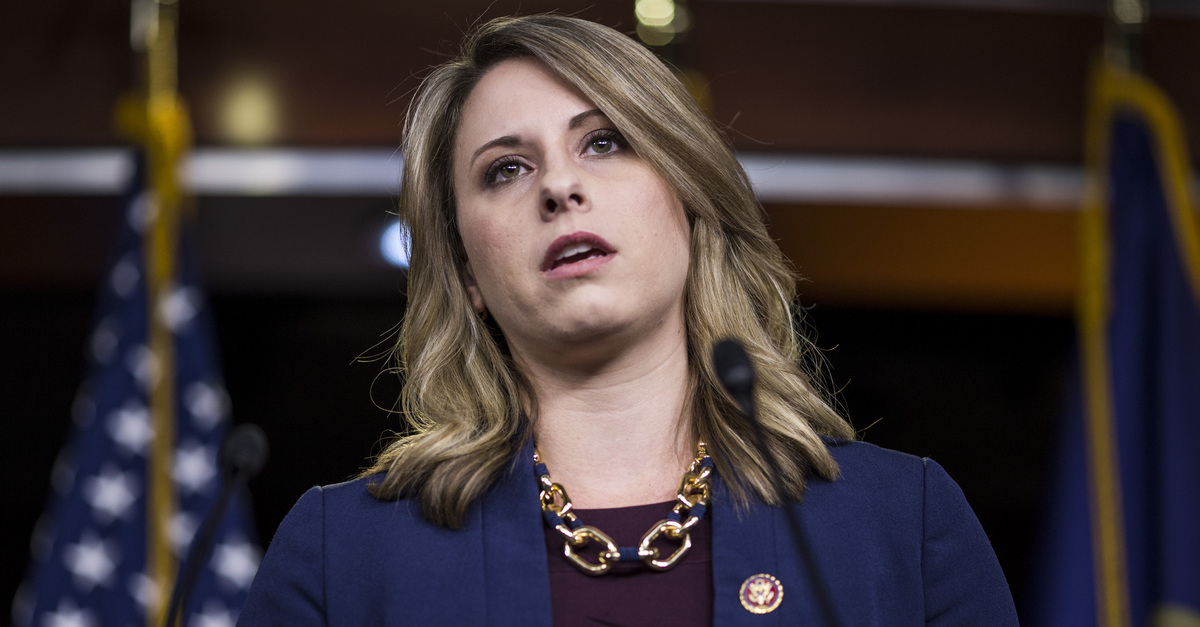 A judge in Los Angeles on Wednesday tossed a lawsuit filed by former representative Katie Hill (D) over a series of nude and compromising photographs published by a British tabloid.

According to the Los Angeles County Superior Court, the Daily Mail was protected by the First Amendment of the U.S. Constitution when they chose to run those racy and controversial (but blurred) images in October 2019–which ultimately led to the rising star resigning from office in disgrace amidst an ethics probe into her relationship with a staffer.

Judge Yolanda Orozco ruled in the publication’s favor after they successfully raised an anti-strategic lawsuit against public participation (anti-SLAPP) defense based on a California law which prohibits lawsuits designed to chill free speech.

“Courts employ a two-step process to evaluate anti-SLAPP motions” Orozco noted. “To invoke the protections of the statute, the defendant must first show that the challenged lawsuit arises from protected activity, such as an act in furtherance of the right of petition or free speech. From this fact, courts ‘presume the purpose of the action was to chill the defendant’s exercise of First Amendment rights. It is then up to the plaintiff to rebut the presumption by showing a reasonable probability of success on the merits.’”

“[R]eporting the news is speech subject to the protections of the First Amendment and subject to an anti-SLAPP motion if the report concerns a public issue or an issue of public interest,” the court noted later on.

In other words, press activity is presumed to fall under the First Amendment and it’s up to the person claiming otherwise to show why the activity at issue shouldn’t qualify as protected speech.

Hill attempted to argue that sharing her nude photographs was the “core injury-producing conduct” that gave rise to claims regarding “the nonconsensual distribution of her private sexual images.”

The Court finds that the gravamen of Plaintiff’s Complaint against Defendant constitutes protected activity under Sections 425.16(e)(3) and (4). As correctly noted by Plaintiff, the gravamen of her Complaint against Defendant is Defendant’s distribution of Plaintiff’s intimate images. However, the distribution of such images is alleged to have only occurred through their publication on the MailOnline website. Accordingly, Defendant’s distribution of the intimate images through their publication constitutes a “statement” or “other conduct in furtherance of the right to free speech” for the purposes of the anti-SLAPP analysis.

The decision cites several pieces of precedent which refer to the First Amendment and its relationship to personal privacy interests. But here, as is often the case in American law, the First Amendment was determined to be the more important principle.

“Public discussion about the qualifications of those who hold or who wish to hold positions of public trust presents the strongest possible case for applications of the safeguards afforded by the First Amendment,” the judge noted, citing one such precedent.

The decision, in large part, turned on the court accepting the Daily Mail’s argument that those published images were related to a matter of public concern.

“Here, the intimate images published by [the Daily Mail] spoke to [Hill’s] character and qualifications for her position, as they allegedly depicted [Hill] with a campaign staffer whom she was alleged to have had a sexual affair with and appeared to show [Hill] using a then-illegal drug and displaying a tattoo that was controversial because it resembled a white supremacy symbol that had become an issue during her congressional campaign,” Orozco wrote. “Accordingly, the images were a matter of ‘public issue or public interest.’”

The court also rejected claims by Hill that the Daily Mail ought to have simply just described the photographs in question.

“[Hill’s] argument that the images are not a matter of public concern because [the Daily Mail] could have simply described the images rather than publishing them is unpersuasive, as the fact that information to be gleaned from an image may be disseminated in an alternative manner does not equate to a finding that the image itself is not a matter of public concern,” Orozco explained.

Carrie A. Goldberg, Hill’s attorney, shared her thoughts after the loss via Twitter–saying the ruling was a setback for women seeking higher office.

“Today my client, [Katie Hill], lost against perverted Daily Mail, a website that peddles in humiliation and monetizes sexual privacy invasions of women,” she wrote. “[The Daily Mail] said, and the court agreed, that Katie’s nudes were their free speech. We think the appellate court will disagree.”