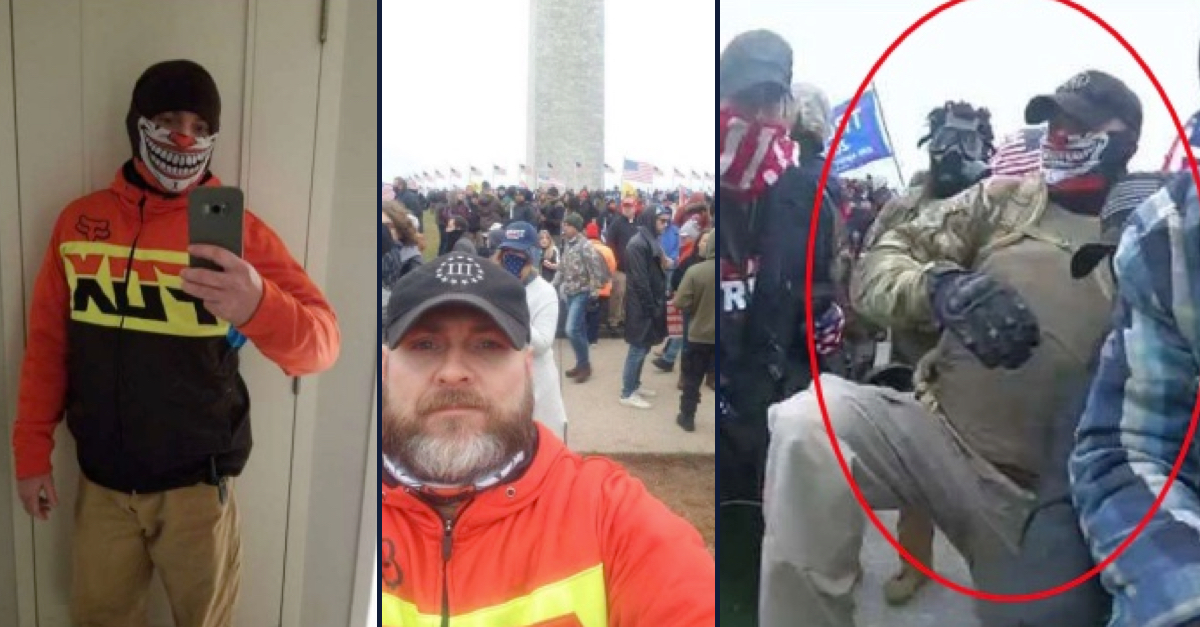 A Texas man who struck an officer with a pole while fighting with police outside the Capitol on Jan. 6 has pleaded guilty to a felony assault charge.

Lucas Denney, 44, faced off against a Metropolitan Police Officer identified by federal prosecutors as “Officer K.K.” at the west side of the Capitol building as the mob of Donald Trump supporters looking to stop Congress from certifying Joe Biden‘s 2020 electoral win building grew increasingly violent.

He pleaded guilty on Thursday to one count of assaulting, resisting, or impeding officers while using a dangerous weapon, a felony punishable by up to 20 years in prison and a $200,000 fine.

The hearing was temporarily derailed when it appeared that Denney might not have fully understood the consequences of pleading guilty to an indictment, and not pursuant to a plea deal.

“We don’t know whether the government will bring additional charges against you,” U.S. District Judge Randolph Moss said to Denney after Assistant U.S. Attorney Jennifer Rozzoni said that the government hadn’t yet decided if it would do so.

“I didn’t know that,” Denney responded before asking to speak privately with his lawyers.

He returned after a few moments, and Moss resumed his questioning.

“I want to make sure Mr. Denney understands he may still face significant charges relating to the events on or surrounding Jan. 6, and those could be significant felony charges or misdemeanor charges, or both,” said Moss, a Barack Obama appointee, after being interrupted by defense attorney William Shipley, who told Moss that he had discussed Denney’s rights with him.

Shipley also threw a possible wrench in the gears by not agreeing to all the facts set forth by the government in the statement of offense. Shipley said that by pleading guilty, Denney was acknowledging only that the government could prove the elements of the assault charge.

According to the government’s statement of offense:

At approximately 2:23 p.m., Metropolitan Police Department (MPD) Officer K.K. had assumed a position on an elevated structure between the crowd that had formed and the west side of the Capitol building. Officer K.K. was at the Capitol building assisting the U.S. Capitol Police in the performance of their official duties. At the time, Officer K.K. was wearing a full MPD-issued uniform, including a marked helmet, police badge, body-worn camera, and a name tag bearing his first initial, last name, and the word “POLICE.” In addition, Officer K.K.’s jacket arm displayed a badge reading “POLICE.” The crowd below was throwing debris at police officers, including Officer K.K., who was armed with crowd-control spray and occasionally used it to repel the rioters. Defendant worked his way through the crowd and attempted to grab the canister of crowd-control spay away from Officer K.K. Officer K.K. then deployed the crowd-control spray and Defendant retreated into the crowd.

According to the probable cause affidavit, Denney was also part of the enraged crowd that collectively pushed back on officers at the doors to the Capitol while chanting “heave ho.”

Prosecutors say that Denney tried to recruit other Trump supporters to join him in Washington on Jan. 6, promising that then-Vice President Mike Pence would follow Trump’s ill-advised instructions to overturn the Electoral College votes from states that went for Biden, which Pence noted he did not have the legal power to do.

So Trump has called this himself. For everyone to come. It’s the day the electoral college is suppose to be certified by congress to officially elect Biden. But, Pence is in charge of this and he’s going to throw out all the votes from states that were proved to have fraud. There’s so much more going on behind the scenes though. That’s why he’s called this rally for support. . . . Trump will stay President . . . . That’s why I’ve been super busy. I’m the President of the Patriot Boys in North Texas and have over 200 guys. We are 3%ers. Since I’m retired from the military this is what I do mainly. Would love to have you go. If you want to just let me know.

Denney also seemed to be at least somewhat aware that he shouldn’t carry a weapon at the Capitol.

“REMINDER: For everyone going to DC remember, no guns,” Denney wrote on Facebook. “They have strict weapon laws. Look them up before you go. Pepper spray is legal though.”

The District of Columbia does allow possession of pepper spray for self-defense purposes.

During an interview in February of 2021, Denney told investigators he belongs to a group called the “Patriot Boys of North Texas,” or PBONT. According to Denney, PBONT identifies with the so-called “Three Percenters” movement, a militia group that bases its name on the false belief that the number of Americans who fought the British during the Revolutionary War amount to only three percent of the population at the time.

Another Texas member of the Three Percenters, Guy Reffitt, was recently convicted on five charges for storming the Capitol while armed.

Those charges, however, were not officially filed within the time parameters set by the Speedy Trial Act, as the government acknowledged in a court filing.

It was apparently that constitutional violation that caused Denney’s attorney William Shipley to look to speed the plea process, rather than have the case dismissed and potentially allow prosecutors to file a more robust indictment.

You can read the complaint against Denney and his Jan. 6 companion Donald Hazard, below.