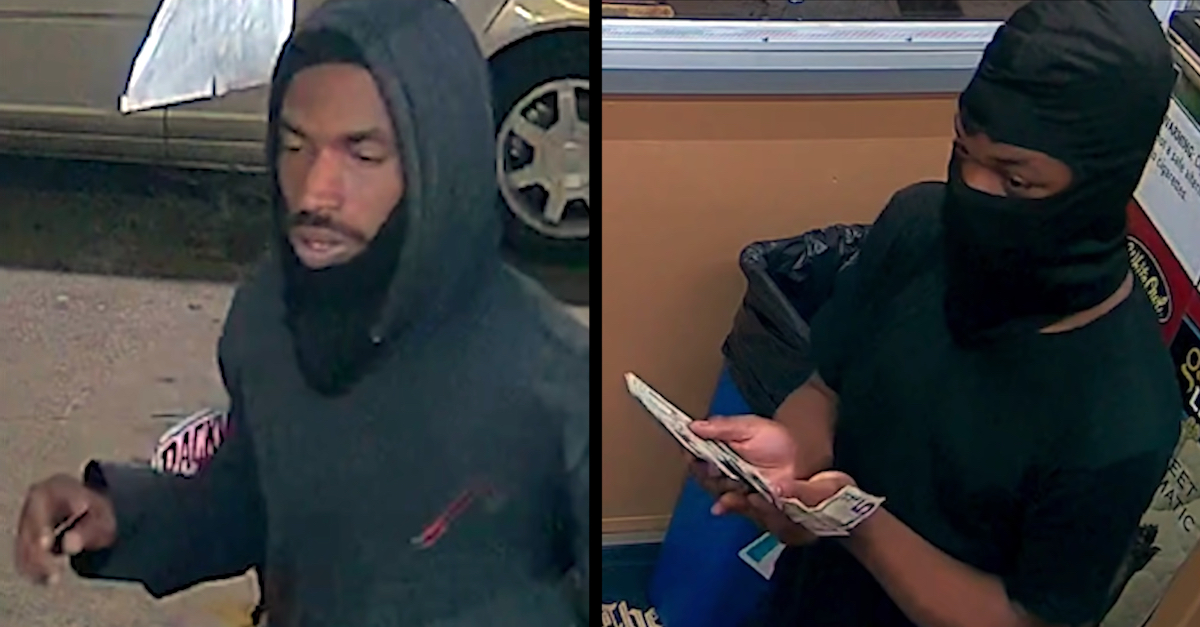 Nathan Coleman and Taheed Ebron are seen with an ATM card and cash in hand after a now-admitted Aug. 24, 2021 kidnapping. (Images via surveillance footage released by the Washington, D.C. Metropolitan Police Department.)

Two Washington, D.C. men have pleaded guilty to “kidnapping two men at gunpoint” and “using blindfolds and zip ties to restrain their victims,” the U.S. Department of Justice announced on Friday.

Taheed Ebron, 21, and Nathan Coleman, 29, both of D.C., committed the crimes over a five-day period in August 2021, prosecutors said.

Both Ebron and Coleman pleaded guilty to two counts of armed kidnapping, according to court documents. Additionally, Ebron admitted carrying a pistol without a license in a separate firearm case.

D.C. police last August released surveillance and ATM images which purported to show the defendants with the fruits of their then-alleged crime spree — cash and ATM cards — in-hand.   When the police announced the arrests, officers indicated that an unnamed 14-year-old juvenile was also involved.

A copy of a plea form obtained and reviewed by Law&Crime said both men would need to plead guilty in order for the agreements to take effect as to either. As is standard practice, the government agreed to dismiss a variety of other charges in return for the plea agreements.

The complete factual proffers filed in court on Friday are not yet available on a public database, but the DOJ summarized the allegations as follows:

According to the government’s evidence, on Aug. 24, 2021, at approximately 10:45 p.m., Ebron, Coleman, and a third perpetrator kidnapped a man at gunpoint while he was walking home in the 1300 block of Corcoran Street NW. The defendants pulled the man’s COVID face mask over his eyes as a blindfold and forced him into the rear of Ebron’s silver Nissan Rogue SUV. They demanded that he turn over his cellphone, credit and debit cards, and personal identification numbers (PINs). The defendants then drove the man to multiple ATM locations and used his financial cards to withdraw more than $1,400 from his accounts. They also used the man’s cards and cellphone to make a series of purchases and transactions, including a $1,200 PayPal transfer. Ebron, Coleman, and the third perpetrator eventually released the man from the SUV, forcing him to lay face down on the ground in an alley before driving away.

Police released video of the suspects as follows:

The next incident went down like this, according to the DOJ:

Just days later, on Aug. 28, 2021, at approximately 3:45 a.m., Ebron, Coleman, and a third perpetrator kidnapped another man at gunpoint near the intersection of 13th and E Streets NE while he was riding an electric scooter on the way to work. After seeing the man, Ebron parked his silver Nissan Rogue SUV in the intersection, and Ebron, Coleman, and the third perpetrator exited the vehicle. The defendants ran toward the man and caught and threw him to the ground. They then hooded him using a drawstring bag and restrained his hands with zip ties that Ebron and Coleman had purchased the previous day. The defendants forced the man into the SUV and demanded his wallet, cellphone, and PINs. They drove him to an ATM and withdrew more than $1,000 from his bank account. Ebron, Coleman, and the third perpetrator eventually released the man from the vehicle, instructing him to run straight ahead and not look back or else be shot. The defendants then used his debit card to make a series of purchases and withdrawals.

According to court documents, the police caught up with Ebron because an OnStar alert showed that a carjacked vehicle “had been tracked and showing as being stationary” in a location to which the police were dispatched.  The narrative continued: