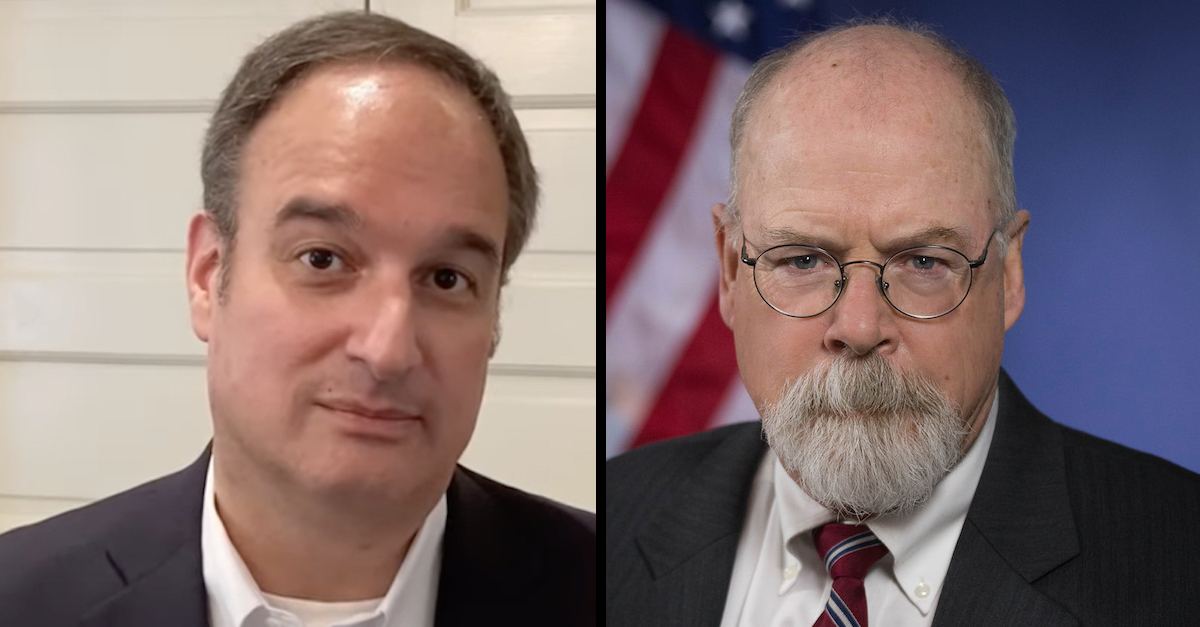 According to the motion, attorneys working under the auspices of Special Prosecutor John H. Durham “never once suggested” that they intended to call an expert witness to testify about the accuracy of the data Sussmann provided to the FBI in the lead-up to the 2016 election, but now, apparently, those prosecutors want to do precisely that.

“Now — a mere six weeks before trial — the Special Counsel has provided a perfunctory and legally deficient notice that he intends to call Special Agent David Martin of the FBI to offer highly technical and complex testimony at trial, including (at his sole discretion) on a topic that the Special Counsel has told the Court he does not intend to put at issue at trial, namely, the accuracy of the data that Mr. Sussmann provided to the FBI, as well as the accuracy of the conclusions drawn from that data,” Sussmann’s lawyers wrote in the Friday evening motion.

As the defense indicated to the Court on March 31, 2022, Mr. Sussmann is amenable to expert testimony from Special Agent Martin that helps educate the jury about basic, uncontroversial issues like what Domain Name System (“DNS”) data is (though the Expert Disclosure provides insufficient notice regarding what specifically Special Agent Martin would say about this topic). However, Mr. Sussmann objects to any expert testimony regarding the accuracy of the data or the accuracy of conclusions drawn from the data. Such testimony is not relevant to the sole crime charged in this case; the Special Counsel’s notice to call an expert to address such issues is wildly untimely; the Special Counsel has not even given adequate notice of what specifically his intended expert would say about these issues; and Mr. Sussmann would be unfairly prejudiced by the Special Counsel’s plan to offer expert testimony on these issues. There simply is not sufficient time before trial for Mr. Sussmann to evaluate Special Agent Martin’s opinions and meaningfully consult an expert of his own about them, given the volume of the data and the range of the conclusions offered about them. In short, the Special Counsel should not be permitted to try this case by ambush.

According to a footnote in the Friday filing, “the Indictment [against Sussmann] makes no allegation regarding the accuracy of the data that Mr. Sussmann provided to the FBI or the specific conclusions reached about the data.”

“Moreover, the Indictment does not allege (nor could it) that Mr. Sussmann, a lawyer without a technical background, knew the data was inaccurate or even had the professional expertise to evaluate its accuracy,” that footnote adds.

The defense argued that the special counsel’s penchant for litigating the data will create a mini-trial about internet data that has nothing to do with whether or not Sussmann lied to the FBI.

Durham was appointed by then-Attorney General Bill Barr in October 2020 to “to investigate whether any federal official, employee, or any other person or entity violated the law in connection with the intelligence, counter-intelligence, or law-enforcement activities directed at the 2016 presidential campaigns, individuals associated with those campaigns, and individuals associated with the administration of President Donald J. Trump, including but not limited to Crossfire Hurricane and the investigation of Special Counsel Robert S. Mueller, III.”

A grand jury in September 2021 indicted Sussmann on a sole count of allegedly “making a false statement to the FBI on Sept. 19, 2016,” the DOJ said at the time. The alleged lie was that Sussmann passed information unfavorable to the then-Trump candidacy to then-FBI general counsel James Baker under the guise that Sussmann was functioning as a private citizen. Rather, Durham’s team has alleged, Sussmann was working as a Perkins Coie attorney who was employed to represent the interests of then-rival candidate Hillary Clinton and the Democratic Party.

Notes submitted by Durham suggest that Sussmann “said” he was “not doing this [e.g., providing the tip] for any client,” but those same notes say Sussmann “[r]epresents DNC, Clinton Foundation, etc.” 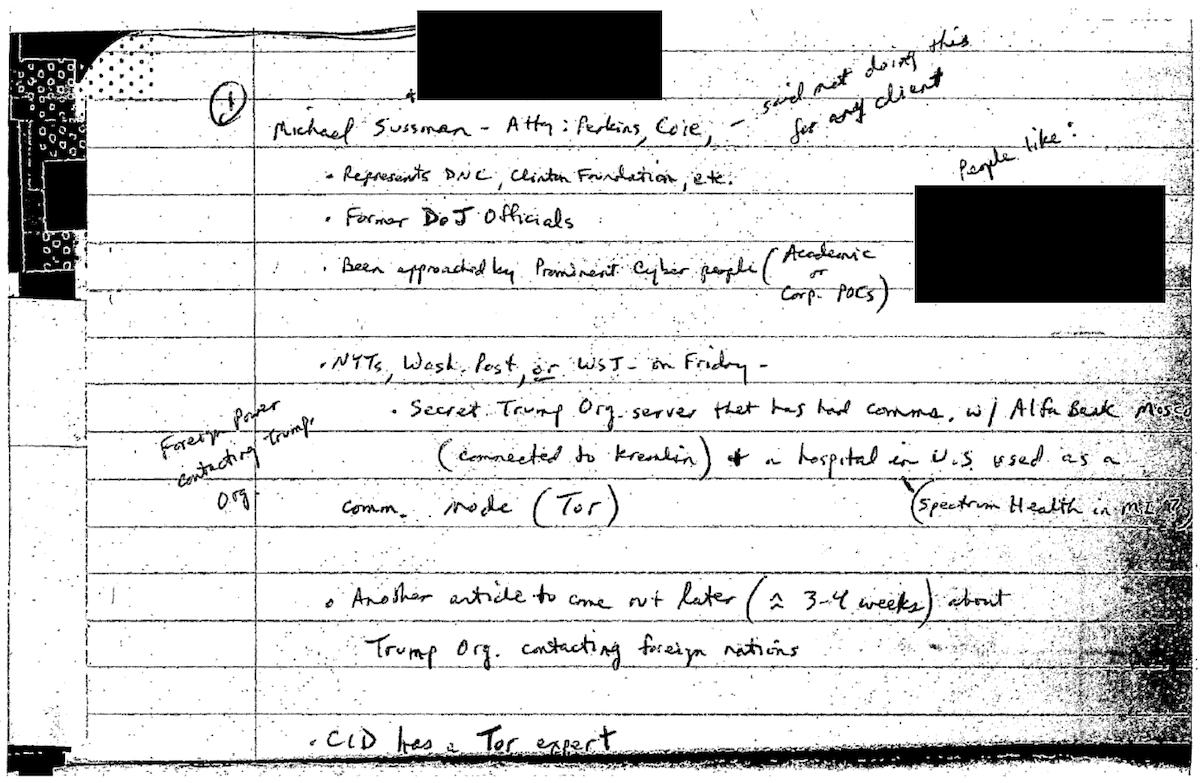 Sussmann’s lawyers wrote on Friday that they orally requested as bar back as Sept. 23, 2021 — just days after the original indictment — the identities of expert witnesses. They noted that they backed that request up in writing on Sept. 27, 2021, and they asked again for expert witness data on March 11, 2022, according to their motion.

Durham’s team of prosecutors didn’t respond until March 30, 2022, according to Sussman’s lawyers. That date was “almost two weeks after the Special Counsel’s March 18, 2022 deadline to produce residual Rule 16 discovery material and Jencks Act material,” the motion indicates.  “Notably, the Special Counsel has not provided Mr. Sussmann with any witness statements for his purported expert pursuant to the Jencks Act, 18 U.S.C. § 3500,” it adds in a footnote.

In other words, according to Sussmann’s counsel, Durham’s lawyers dropped the ball and should be punished accordingly.

“Federal Rule of Criminal Procedure 16(a)(1)(G) requires the government, at the defendant’s request, to provide the defendant with a written summary of expert testimony the government intends to offer during its case-in-chief that ‘describe[s] the witness’s opinions, the bases and reasons for those opinions, and the witness’s qualifications,'” Sussmann’s attorneys asserted.  “A district court has ‘broad discretion’ to exclude expert testimony where a party fails to comply with this discovery rule.”

The defense then argued that Durham was trying to present irrelevant evidence that is more prejudicial than probative to the issue of whether Sussmann lied. Then came this attack:

From the outset of this case—beginning with the sprawling 27-page speaking Indictment—the Special Counsel has tried to expand the scope of this case beyond the single charge he brought against Mr. Sussmann. Now, in an untimely and deficient notice, the Special Counsel has disclosed that he seeks to introduce expert testimony not only to explain what DNS data is, but about issues, including the technical accuracy or inaccuracy of the data, that are wholly irrelevant to the single false statement charge at issue and that the Special Counsel himself has told the Court he is not challenging. For his part, Mr. Sussmann does not intend to offer evidence regarding the accuracy of such data and, as the Court is aware, has moved to exclude evidence on that very topic. (Citation omitted.) Such testimony will inevitably lead to precisely the type of confusion and unfair prejudice that the Federal Rules are designed to prevent, and for the reasons set forth below, this testimony must be precluded. The only thing relevant to the charged crime regarding these topics is, at best, evidence that bears directly on Mr. Sussmann’s state of mind or intent regarding the accuracy of the data or the accuracy of the conclusions drawn from the data.

“The disclosure in this case is the opposite of timely,” the motion added as it again pointed to the months of requests by Sussmann’s lawyers for Durham’s people to make the required disclosures.

Again, from the document:

Not only that, but the expert testimony that the Special Counsel has noticed is extraordinarily complicated and highly technical: It relates to the accuracy and possible fabrication, manipulation, or “spoofing,” of truly voluminous DNS data, as well as “the analytic significance and conclusions that can be drawn based on the provenance and origins” of that voluminous data. (Citation omitted.) Because there is so little time left before trial, and because the issues are so involved, Mr. Sussmann does not have time to meaningfully prepare to cross-examine this expert at trial, nor does Mr. Sussmann have meaningful time to consult with an expert of his own about the Special Counsel’s expert at this late date. The complexity of the testimony, particularly against the backdrop of the complicated national security issues in play, only underscores the prejudice to Mr. Sussmann arising from the Special Counsel’s tactics.

What Durham’s lawyers did belatedly supply, according to Sussmann’s team, is “flimsy” and “does not so much as reference DNS or TOR” — the subject matter of the proffered testimony.

“Here, there is no allegation that Mr. Sussmann—who is not a DNS expert—believed or had any reason to believe there was any issue with the data, the analysis, or the conclusions drawn therefrom,” the document goes on to state. “Indeed, permitting Special Agent Martin to testify about the accuracy of the data Mr. Sussmann provided to the government or the conclusions drawn from that data would force a mini- trial on the issue and involve a battle between experts on a highly complicated issue of fact that does not bear on the charged false statement.”

“Mr. Sussmann requests that this Court issue an order precluding the Special Counsel from offering expert testimony from Special Agent David Martin except regarding basic, uncontroversial matters such as what DNS data is,” the motion concludes.

The only testimony Sussmann wants the court to allow from Martin is a discussion which “merely explains the underlying technology to the jury.”

The complete document is below: