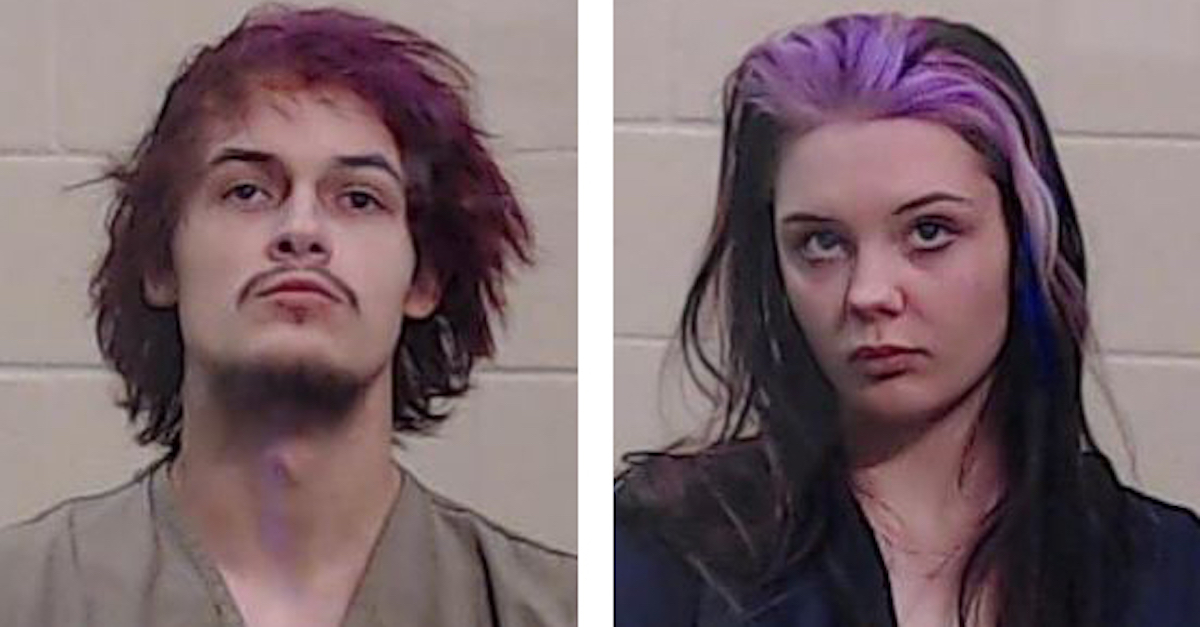 Kameron Gammage and Leyla Pierson via the Odessa Police Department.

The parents of an 8-month-old baby in Texas are behind bars after their infant son died with a litany of head injuries earlier this week, authorities say. Kameron Gammage and Leyla Grace Pierson were both taken into custody on Tuesday and charged with felonies in connection with their son’s untimely death.

Gammage, 23, who allegedly admitted to having “extreme anger issues,” is accused of inflicting the fatal wounds on the young boy and faces one count of injury to a child with intent to cause serious bodily injury, a first-degree felony punishable by up to life in prison. Authorities say that Gammage also acknowledged that he “recently strangled two dogs to death.”

Pierson, 18, is facing one count of criminal negligence injury to a child, a state jail felony punishable by up to two years in prison.

According to a probable cause arrest affidavit from the Odessa Police Department, officers responded to Gammage and Pierson’s home at approximately 12:52 p.m. on Tuesday regarding a call for medical assistance. The parents live in the Brady Station Apartment Complex located in the 4200 block of E 52nd Street, authorities say. The caller told the 911 dispatcher that there was an infant in the apartment who was unconscious and not breathing.

Upon arriving at the scene, first responders found the couple’s son deceased inside of the apartment.

“The deceased infant had heavy bruising swelling to the left side of his face and head,” police wrote in the affidavit. “There were also multiple smaller bruises along the top of the deceased infant’s cranium.”

In an interview with investigators, Pierson said that she fed the baby at approximately 5 a.m. that morning then fell back asleep. She awoke at approximately noon and found the child not breathing. She then “frantically” attempted to wake Gammage but said he “seemed uncaring” and “took several minutes to get up and help.” When he finally approached her to help, Pierson said Gammage still “seemed uncaring.”

Following Pierson’s instructions, Gammage called 911 and began CPR in accordance with the 911 dispatcher’s instructions, but they were unable to revive the baby. Sometime after he called 911, Pierson said that Gammage “became apologetic toward her and told her he hoped she wasn’t mad at him.”

In the aftermath of the baby’s death, investigators noted that Gammage appeared apathetic at the scene, saying he “remained unemotional and seemed to lack care about the incident throughout contact.” The parents were then brought to the police station for additional questioning.

In a follow-up interview at the station, Gammage allegedly told investigators that he last saw his son alive between 5:30 a.m. and 6 a.m. that morning before he too went back to sleep. When police asked Gammage about the bruises on the infant’s head, Gammage allegedly said the injury came from “the infant hitting his head on a hard portion of the interior of the crib.”

“Upon further interview with [Gammage], he admitted that he does have extreme anger issues and has been dealing with a lot of stress lately, including the infant frequently crying,” police wrote in the affidavit. “[Gammage] admitted that he recently strangled two dogs to death and attempted to dispose of their bodies to avoid getting in trouble. ”

Gammage further admitted that three days prior to his son’s death, on the evening of July 9, he woke up to his son crying at approximately 10 p.m. He allegedly went to go play with the child and “began tossing the infant in the air then catching him,” the affidavit states, adding that Gammage was “frustrated” that the infant “would not stop crying.”

Pierson allegedly admitted that she noticed the injuries to her son and that the baby became more “fussy” in the days that followed, but said she did not seek medical attention because she thought the boy was just teething.

In addition to the charges in connection with his son’s death, Gammage was also charged with one count of sexual assault against a child.

According to a report from Odessa CBS affiliate KOSA-TV, a grand jury in Andrews County on May 19 indicted Gammage on the sexual assault charge and a warrant for his arrest was issued. The offense in question reportedly involved a 15-year-old victim and took place between 2019 and 2020.