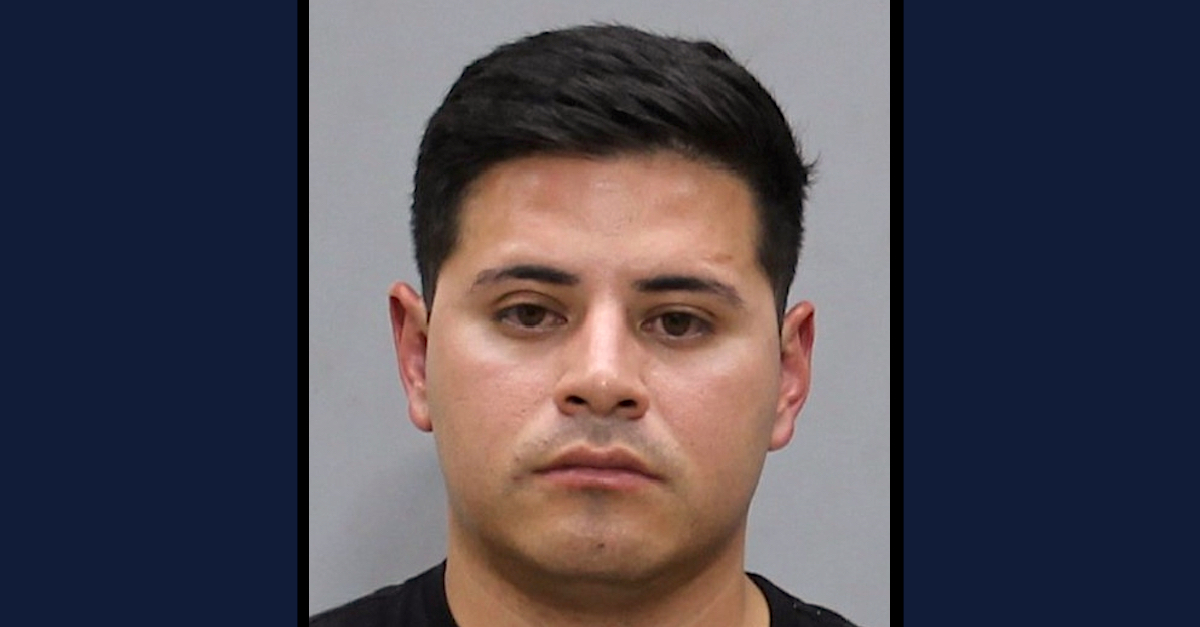 A Connecticut state trooper who allegedly served in the Army was arrested twice this week over what court paperwork describes as multiple incidents of domestic abuse that finally sent an unnamed female victim to the hospital. The alleged victim told police that within the last year the trooper had attacked her “approximately forty times,” hit her with his belt, threatened to kill her, and threatened to harm a dog. Some of the alleged abuse occurred when the victim was pregnant, according to court documents.

Jaime Solis, 29, was arrested by officers with the Vernon Police Department on Monday around 7:00 p.m., according to a state police press release issued Monday. He was arrested again Wednesday by reportedly turning himself in after learning a warrant for his arrested had been issued.

The first arrest, according to the state police, occurred “following a domestic dispute” at the trooper’s home.

“The State Police powers of Jaime Solis have been suspended,” the state police said Monday. “He has been placed on administrative duty pending the outcome of the investigation and a CSP Internal Affairs investigation.”

Solis was assigned to a state police troop in Danielson and had been a member of the force since 2020, the state police added.

The initial charges included second-degree assault, disorderly conduct, and risk of injury to a minor, according to Connecticut court records reviewed by Law&Crime and a report from Hartford NBC station WVIT.

New Haven ABC affiliate WTNH described the final charges as “two counts of disorderly conduct, two counts of assault in the third degree, two counts of threatening in the second degree, and one count of risk of injury to a minor.”  The final list of charges does not yet appear on a public court docket.

Court papers say Solis’ bail is set at $50,000, and the defendant has been ordered to obey a no-contact order.

“We have been made aware of the second arrest of Jaime Solis by Vernon Police Department,” the state police said after the second arrest. “Solis’ police powers remain suspended, and he remains on administrative duties pending the active investigations. Please contact Vernon PD with any inquiries concerning the details of the arrest.”

An affidavit obtained by Law&Crime says a woman identified as “Victim 1” (or “V1”) appeared at the lobby of the Vernon Police Department on Tuesday at about 5:28 p.m. “to report past tense physical domestic violence incidents.”

“During this incident, V1 reported she was physically assaulted by [redacted] Jaime Solis,” the affidavit reads.  “V1 sustained a severe laceration during this incident and went to the hospital for treatment.  V1 told me she received thirteen stitches at the hospital to close the wound above her eye.  I confirmed V1 had numerous stitches above her left eye.  As a result of the investigation on 08/01/2022, Jaime Solis was arrested and charged.”

The document then told of several alleged past events from the perspective of Victim 1:

I returned to the Vernon Police Department to speak with Officer Worobel to discuss past incidents where Jaime [Solis] physically assaulted me. I also came into the Vernon PD to ask about an unregistered firearm I found on 08/01/2022. Per State Police protocol, Lt Haglund of CSP Troop D arrived at my home to collect all of Jaime’s work belongings, including his firearms, patrol vehicle, and other miscellaneous work related items in the home. While Lt Haglund was at my residence, I informed him that I found an additional unregistered firearm sitting on his dresser in our bedroom. In the past, Jaime told me the firearm was from when he was in the Army and they never collected it when he left. I also came into the VPD to speak with an officer regarding threatening remarks Jaime made on 08/01/2022 when he assaulted me.

I estimate within the last year, Jaime has physically assaulted me approximately forty times. Many of the incidents occurred when I attempted to stick up for myself, which started verbal arguments. The verbal arguments would then escalate and Jaime would often punch, slap, or strike me with objects including his belt. Jaime has also threatened to kill me and assault me numerous times in the past.

The document continued by describing a specific incident Victim 1 said she “remember[ed] well” from around Christmas 2020.

During this incident, I attempted to stick up for myself which upset Jaime and he began to verbally disrespect me. Jaime pushed me backwards and I fell into a washing machine. As I tried to stand back up, Jaime backhanded me in the face with what I believe was his left hand. The side of his hand struck directly to the right of my left eye, from the perspective of someone facing me. The strike split open my head leaving a open wound which was bleeding a lot. Jaime went to the store and bought butterfly bandages to close the wound. I still have an approximate half inch to one inch scar from the injury. I am not sure if I photographed the injury but will send Officer Worobel the photographs if I am able to find any. I was approximately three months pregnant at this time.

The victim said she used her cell phone to record another argument on the evening of June 24, 2022, which involved money.

“In the video you can hear me scream which is directly after Jaime shoved me backwards,” the victim said, according to the police document.  “Jaime then slapped me in the face and began punching me in the stomach.  Jaime continued to shove me, slap me in the face, and punch me in the stomach numerous times.  During the entire incident, [redacted] Juvenile 1 (J1) was crawling around on the floor. After Jaime shoved me the first time, I stumbled backwards and accidentally stepped on J1’s fingers. I later sent the recording of this incident to Officer Worobel.”

Solis also told the victim he would “beat your (my) ass in front of” Juvenile 1 during a subsequent altercation.

Solis further allegedly threatened via text message that “‘something’ would happen to the dog” if the victim didn’t “leave with him alive.”

“You’re sick,” the victim said she texted Solis in return.

“And that’s not a threat,” Solis allegedly retorted. “That is. Promise. No that’s not even close to what I’m capable off [sic].  I told you, idc [I don’t care].”

Another time, on May 16, 2022, Solis allegedly yelled at the victim about a group of nine of his friends staying with him.

“Jaime was yelling at me and telling me I did not have a say in who stayed at the house,” the victim told the police, according to the arrest warrant affidavit.

The incident quickly escalated, according to the document:

Jaime quickly ran up the stairs and I turned around to face the sink in the kitchen.  Jaime ran back down the stairs with his belt and I was cornered in the kitchen with nowhere to go.  I yelled for Jaime to stop and he began repeatedly hitting me with it.  Jaime hit me with the belt at least 1o times.  The assault left bruises on my arms, back, butt, back of my upper leg, and on the back of my calf.  I took photographs of the injuries and there were at least 10 total bruises.

“I wish to press charges for all of the past incidents where Jaime threatened and physically assaulted me,” the victim concluded, according to the affidavit.

The police wrote that they received several videos from the victim. The victim said she moved the files to a flash drive “in fear” that Solis could find them on her phone; the process is believed to have removed the time stamps from the recordings. Still, a police officer wrote that video of the June 24, 2022 incident “was consistent with” the victim’s prior accounts.

“Yell at me fucking outside?” Solis allegedly berated the victim in one recording. “Who the fuck do you think you are?”

“Get the fuck away before I beat your ass in front of him,” Solis allegedly said in another.

Solis also allegedly called someone — presumably the victim — a “piece of shit” while the juvenile was present.

Photos of the victim’s bruises were also consistent with her account, the police wrote.

Another chain of text messages suggested that Solis wanted to kick the victim out of the house so he could “have women” there.

Solis allegedly refused to speak with the police when asked about the allegations; the affidavit says he hired a lawyer who told him to “stay quiet.”

An attorney of record is not listed on a current court docket.

A judge allowed Solis to return home to collect his belongings, Hartford CBS affiliate WFSB reported  He appears to be staying in an apartment, according to court paperwork.

The arrest affidavit is below: