Prominent S.C. Attorney Resigned from Family’s Law Firm After Being Accused of Misappropriating Funds. He Was Shot in the Head the Next Day. 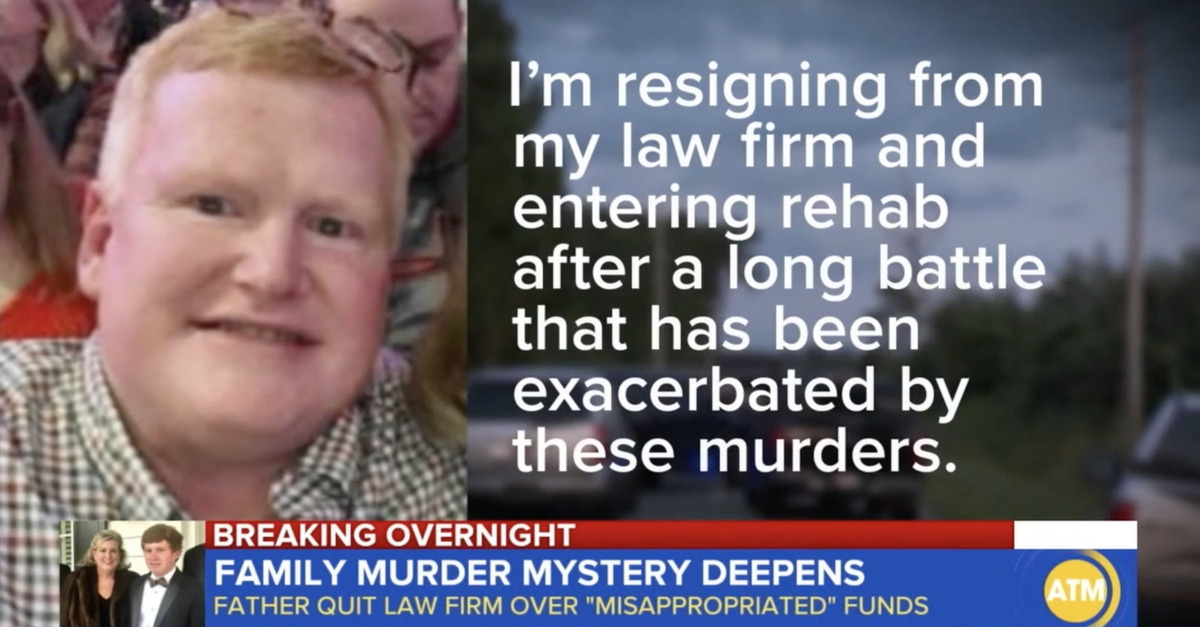 A prominent South Carolina lawyer reportedly resigned from the powerful local law firm where he worked–the day before he was apparently shot in the head over the weekend.

Richard Alexander “Alex” Murdaugh, 53, the scion of a legal dynasty spanning hundreds of years in the Palmetto State’s Lowcountry region, called 911 on Saturday to report that he had been shot by a passing motorist while checking his own car on the side of the road.

On Friday, Murdaugh resigned from the law firm that bears his name: Peters, Murdaugh, Parker, Eltzroth, Detrick. The firm itself was founded by Murdaugh’s grandfather over 100 years ago. The firm employed Murdaugh’s brother, Randy Murdaugh, and his late father, former 14th Circuit Solicitor Randolph Murdaugh III.

As of Monday, the firm’s website was offline and simply bore the message: “This website is temporarily unavailable.”

Murdaugh himself first announced the departure–casting his decision as necessary in light of the midsummer murders of his wife, Margaret “Maggie” Murdaugh, 52, and their son, Paul Murdaugh, 22.

“The murders of my wife and son have caused an incredibly difficult time in my life,” the attorney’s full-though-brief statement begins. “I have made a lot of decisions that I truly regret. I’m resigning from my law firm and entering rehab after a long battle that has been exacerbated by these murders. I am immensely sorry to everyone I’ve hurt including my family, friends and colleagues. I ask for prayers as I rehabilitate myself and my relationships.”

The firm verified Murdaugh’s departure late Monday–alleging that he had misappropriated funds from the business. That discovery, PMPED claims, is what actually prompted the attorney’s resignation.

“This is disappointing news for all of us,” the firm’s statement said. “Rest assured that our firm will deal with this in a straightforward manner. There’s no place in our firm for such behavior. Due to the ongoing investigations into these matters and client confidentiality, PMPED cannot comment further at this time. We encourage any client with questions to contact our offices regarding their file.”

Murdaugh’s attorney Jim Griffin attempted to thread the needle between his client’s story and that of the law firm’s.

“Alex resigned after being accused of diverting lawyer fees from the firm,” Griffin said in a Tuesday statement to the Associated Press. “These allegations prompted him to confront a dependency and he voluntarily checked into an in-patient substance abuse rehab facility after being discharged from the hospital today.”

The accused attorney was in the hospital after receiving “a superficial gunshot wound to the head,” according to South Carolina Law Enforcement Division Public Information Officer Tommy Crosby.

The agency said authorities received Murdaugh’s 911 call at 1:34 p.m. on Saturday. He told dispatchers he had been shot on Old Salkehatchie Road near Varnville, S.C. and was subsequently airlifted to Memorial Health University Medical Center in Savannah, Ga. for treatment. Hampton County Sheriff’s deputies secured the scene and eventually SLED agents were called in to lead the investigation.

After the shooting–the latest in a bizarre patchwork of violence surrounding the Murdaugh clan for the past several years–the family released a statement calling attention to the recent spate of tragic events.

“The Murdaugh family has suffered through more than any one family can ever imagine,” it read.

In early June, the double murder rocked a prominent family amid ongoing legal woes. The younger victim, Paul Murdaugh, was a suspect in the Feb. 2019 boating incident that killed 19-year-old Mallory Beach. Murdaugh was facing three criminal charges from that local tragedy. The entire case was dogged by a narrative that the family had somehow used its long-collected power, largesse and influence to shape the contours of that initial investigation.

The charges were dropped after Paul Murdaugh died. There is, however, still an extant obstruction of justice investigation related to that boat crash and alleged subsequent efforts to cover up what happened on the night in question.

State police have remained tight-lipped about the double murders at the palatial 1,770-acre hunting lodge that locals refer to as “Moselle.” Authorities have also been fighting numerous open records requests from the news media for information about those slayings.

Alex Murdaugh was just miles away from that lodge when he was shot.

SLED also announced in late June that they were taking over the investigation into the 2015 murder of 19-year-old Stephen Smith “based upon information gathered during the course of the double murder investigation of Maggie and Paul Murdaugh.”