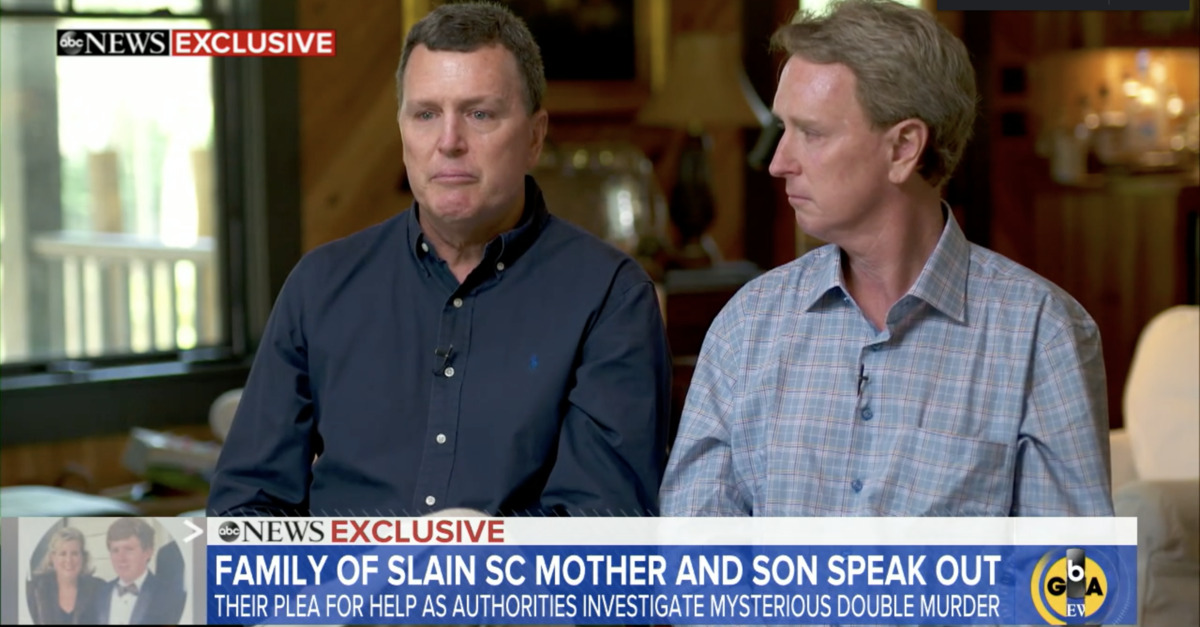 A young man and his mother were mysteriously gunned down at a family home in South Carolina earlier this month. Surviving family members are beginning to publicly speculate about the reasons why.

The story here is an exercise in old money, accidental death, brutal murder and the online culture of pseudo-anonymous harassment–replete with allegations of a coverup and uncertain allegiances. Margaret “Maggie” Murdaugh, 52, and her son, Paul Murdaugh, 22, were found shot and killed on the night of June 7. According to the Colleton County Sheriff’s Office, the mother and son had been shot “multiple times” between 9 and 9:30 a.m. that day.

One of them had been killed with a shotgun; the other with an assault-style rifle, according to local outlet The Island Packet.

Richard Alexander “Alex” Murdaugh, 53, discovered their bodies upon getting home from work. Just after 10 p.m., he dialed 911. The distraught father then called two of his brothers.

“As soon as I answered the phone, I knew something was wrong,” John Marvin Murdaugh said through tears during an interview with Good Morning America on Thursday morning. “[Alex] just told me, ‘Come as fast as you can—Paul and Maggie have been hurt.’”

And the uncle thinks he knows one possible reason why.

Mallory Beach died in a February 2019 boat crash. Two years later Paul Murdaugh, the man charged in her death, was killed. What happened during those two years? https://t.co/JPTxTbRvGp

Prosecutors allege that Paul Murdaugh, who was underage at the time, had been boating under the influence of alcohol. Beach’s mother also filed a wrongful death lawsuit against Murdaugh, his family, and the corner store that sold the booze leading up to her daughter’s death.

Paul Murdaugh pleaded not guilty and was free on $50,000 bond. A trial date had yet to be scheduled. Now the charges will be dismissed.

The Murdaugh home in question is actually a 1,770-acre hunting lodge that locals refer to as “Moselle.” They also own what People magazine refers to as an “airy beach house” in Edisto, S.C.

Beach’s body was only discovered seven days after the crash and the resulting controversy led many in the region to wonder if the Murdaugh family’s longstanding ties to the South Carolina legal community had any impact on the investigation. Those worries were exacerbated when the 14th Circuit Solicitor’s Office–the agency that would have normally had jurisdiction over the case–recused themselves due to the family’s extant ties to the office.

The Beach family’s attorney has explicitly alleged that law enforcement sought to improperly influence the investigation–noting that Paul Murdaugh was not interviewed at the scene. There’s also reportedly an investigation into whether multiple members of the Murdaugh family obstructed justice immediately after Beach died.

Paul Murdaugh’s grandfather, great-grandfather and great-great grandfather served as elected prosecutors over multiple generations in South Carolina’s Lowcountry region. Alex Murdaugh was himself never elected but his biography on the family’s storied law firm website notes that he works as “a part-time Prosecutor for the 14th Judicial Circuit.”

The father is also named as a party in the civil suit because he owns the boat; his other son, Alex “Buster” Murdaugh Jr., is also a named defendant because he allegedly provided his younger brother the necessary ID used to fool the convenience store clerk in order to purchase the alcohol on that fateful day.

The Murdaugh family, long known in the region as something of an institution, had more recently became the subject of suspicion and scorn in the aftermath of Mallory Beach’s death. Paul Murdaugh was apparently bullied and threatened over his real or perceived role in Beach’s death.

“I didn’t think it was a credible threat—if it was, I would have tried to do something or notify someone,” John Marvin Murdaugh said during his GMA interview. “But I guess, maybe I made a mistake.”

The second brother who Alex Murdaugh called the night he found his family dead confirmed the online abuse–but said that negativity wasn’t helpful to finding out who killed his sister-in-law and nephew.