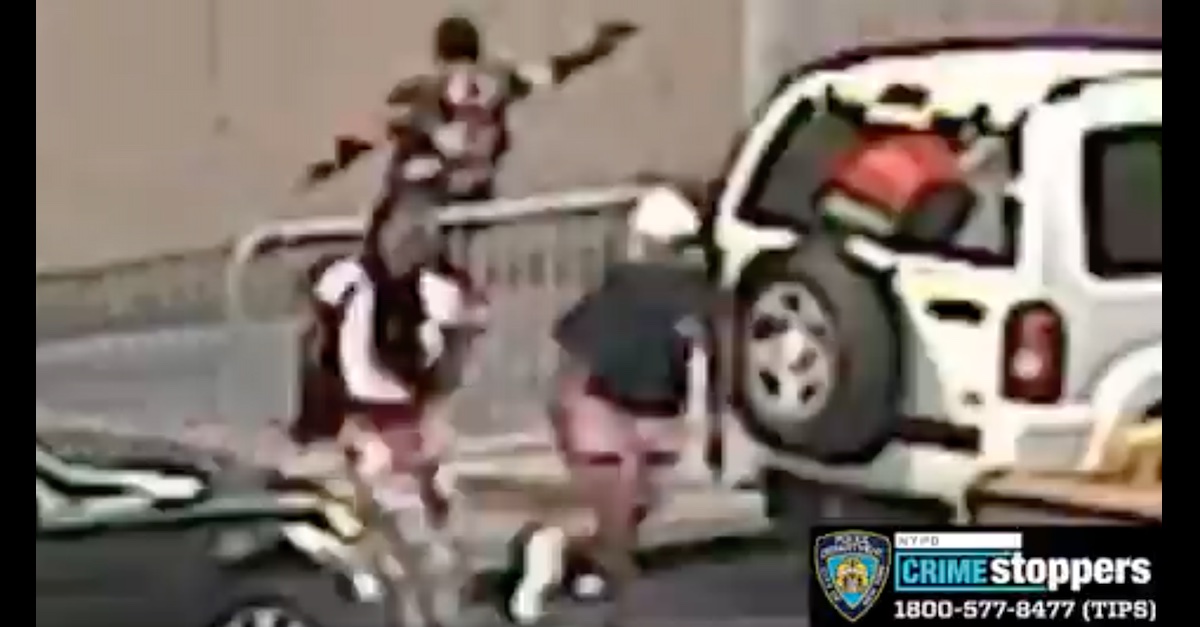 An image shows a suspect pointing a gun in Times Square on the evening of June 27, 2021.

The New York City Police Department on Monday morning released video footage of a suspect accused of shooting an “innocent bystander” in Times Square on Sunday. The shooting occurred at about 5:15 p.m. in one of New York City’s busiest tourist destinations. Now, Mayor Bill de Blasio and Chief Rodney K. Harrison say they’ll move aggressively to deal with increased violence in the area.

The man hit by a stray bullet yesterday in #TimesSquare is Sam Poulin, a #Marine from #FultonCounty, according to a report in the New York Post ➡️ https://t.co/vSuNjezWve pic.twitter.com/Bhgyk9ESvU

The New York Post said the bullet ricocheted, then struck Poulin. The victim was visiting the Big Apple with his wife and other relatives, the newspaper reported. Poulin was described by WABC-TV as “alert and talking” as paramedics prepared him for transport and that he was “grazed in the back” by a bullet that was “visible and did not pierce through his body.” The TV station’s report described Poulin’s injuries as “non-life-threatening.”

Bystandards recorded video of Poulin being taken to the hospital.

Police told WABC-TV that a fight broke out among a group of CD vendors and that Poulin was not an intended target. ABC News reported that he was simply standing in the wrong place at the wrong time when one of the people involved in the altercation pulled a gun and fired.

ABC News said that the sound of the gunshot “set off panic among tourists” and residents alike who were in the vicinity.

Both local television stations noted that the incident was one of several recently were gunfire erupted at or near the so-called “Crossroads of the World.” One shooting occurred June 5, 2021, WABC noted; in May, three bystanders, one of them a four-year-old child, were shot during the daylight hours in Times Square. A suspect in that case was arrested in Florida several days later.

New York City Mayor Bill de Blasio on Monday morning called the shooting “absolutely unacceptable” and said he would direct the NYPD to move “very, very aggressively” to “immediately” deal with the rise of violence.

He dubbed the initiative a “Times Square Safety Action Plan” and said it would include “adding additional officers” — a tactic he later called “flood the zone.”

The NYPD is seeking the public’s help in identifying a man in connection with a shooting that wounded a 21-year-old marine who was visiting Times Square. https://t.co/NycF9mvRkZ pic.twitter.com/C7OKVcr2fm

NYPD Chief Rodney K. Harrison said that plan would involve “dozens” of officers.  He said the officers might include “undercover” officers targeting the “aggressive” panhandling and soliciting of CD sales aimed at tourists and other passersby.

The news of another shooting in Times Square, in broad daylight, is a chilling reminder of the rising threat of gun violence across our city. The spike in victims and incidents are not just statistics on a report; the trauma and bloodshed are real. We cannot have a real economic recovery from COVID-19 if our centers of business and tourism are perceived to be unsafe. More importantly, we cannot recover this epidemic of gun violence that is disproportionately striking communities of color if we do not get these illegal guns off our streets. The leaders of this city, both now and going forward, must be committed to both the intervention and prevention measures needed to save lives.

[image via the NYPD]