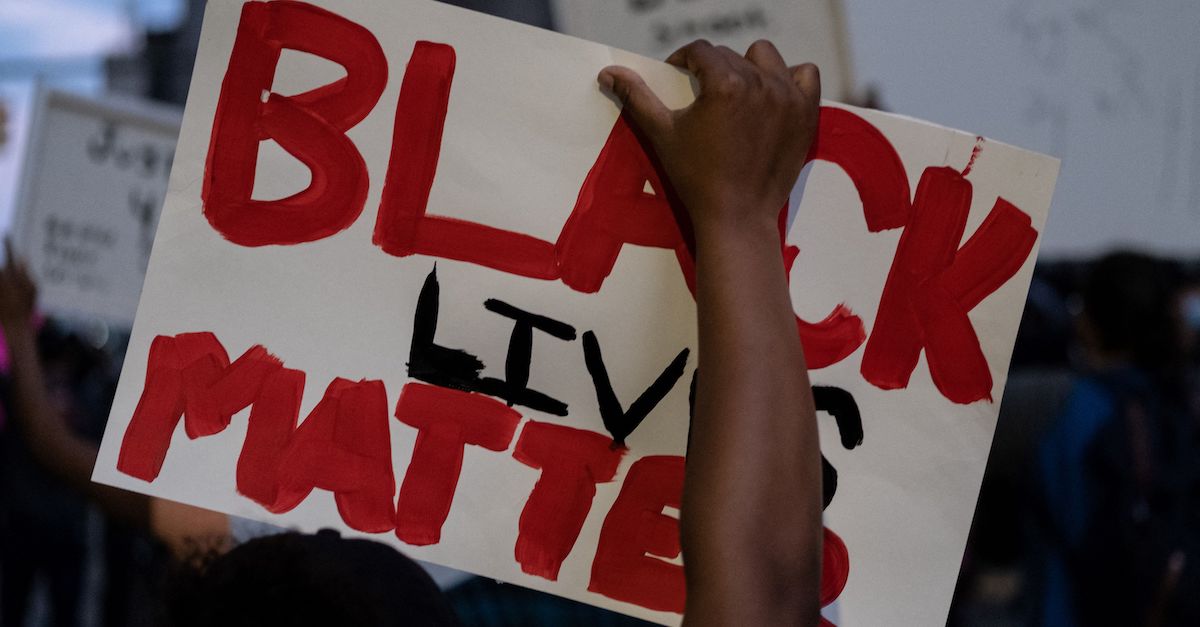 A person holds up a placard that reads, ‘Black lives matter’ during a protest in the city of Detroit, Michigan, on May 29, 2020, during a demonstration over the death of George Floyd, a black man murdered by a white police officer.

A Michigan man has been charged with federal hate crimes for allegedly threatening to intimidate Black Lives Matter protesters weeks after George Floyd’s murder sparked protests and riots throughout the state.

On May 25, 2020, former Minneapolis police officer Derek Chauvin knelt on Floyd’s neck for more than nine minutes, ultimately killing him in an act that animated the Black Lives Matter movement globally.

Just weeks later, 61-year-old Kenneth David Pilon allegedly started making a flurry of threatening phone calls filled with racist invective to nine Starbucks stores throughout Michigan. Prosecutors quote Pilon using his cell phone to tell one worker in a Saginaw store at 4:39 p.m. on June 14, 2020: “Tell all the Starbucks workers wearing BLM shirts that the only good n***er is a dead n***er.”

Pilon dialed up another store in that city minutes later on 4:45 p.m., with a similar message, according to his criminal information.

One minute later, Pilon allegedly told another Starbucks in Bay City: “I’m gonna go out and lynch me a n***er.”

Beyond the phone calls, Pilon allegedly left a noose in a Goodwill parking lot in Saginaw with a handwritten note that read: “An accessory to be worn with your ‘BLM’ t-shirt. Happy Protesting!”

Pilon left the same object and messages in different locations over a span of weeks, including inside a 7-Eleven store, a Walmart parking lot, a Kroger parking lot, and a car, according to court papers.

Prosecutors say that Pilon had done this all in order to intimidate people from exercising their rights.

Pilon’s criminal information lists six alleged violations of 18 U.S.C. § 245(b)(5), a statute which reads as follows:

Whoever, whether or not acting under color of law, by force or threat of force willfully injures, intimidates or interferes with, or attempts to injure, intimidate or interfere with any citizen because he is or has been, or in order to intimidate such citizen or any other citizen from lawfully aiding or encouraging other persons to participate, without discrimination on account of race, color, religion or national origin, in any of the benefits or activities described in subparagraphs (1)(A) through (1)(E) or subparagraphs (2)(A) through (2)(F), or participating lawfully in speech or peaceful assembly opposing any denial of the opportunity to so participate—shall be fined under this title, or imprisoned not more than one year, or both

Pilon’s alleged intimidation spree took place during a time of massive civil unrest, particularly in his home state of Michigan. By early June 2020, hundreds had been arrested in the Minneapolis and St. Paul areas and local outlets there reported more than 500 Twin Cities shops and restaurants reported damage amid violent protests over Floyd’s death.

A jury found Chauvin guilty a little more than a year ago of murder and manslaughter, a verdict that led to his 22-year sentence. The disgraced former police officer appealed his conviction on Wednesday.

Pilon’s docket does not list an attorney of record.