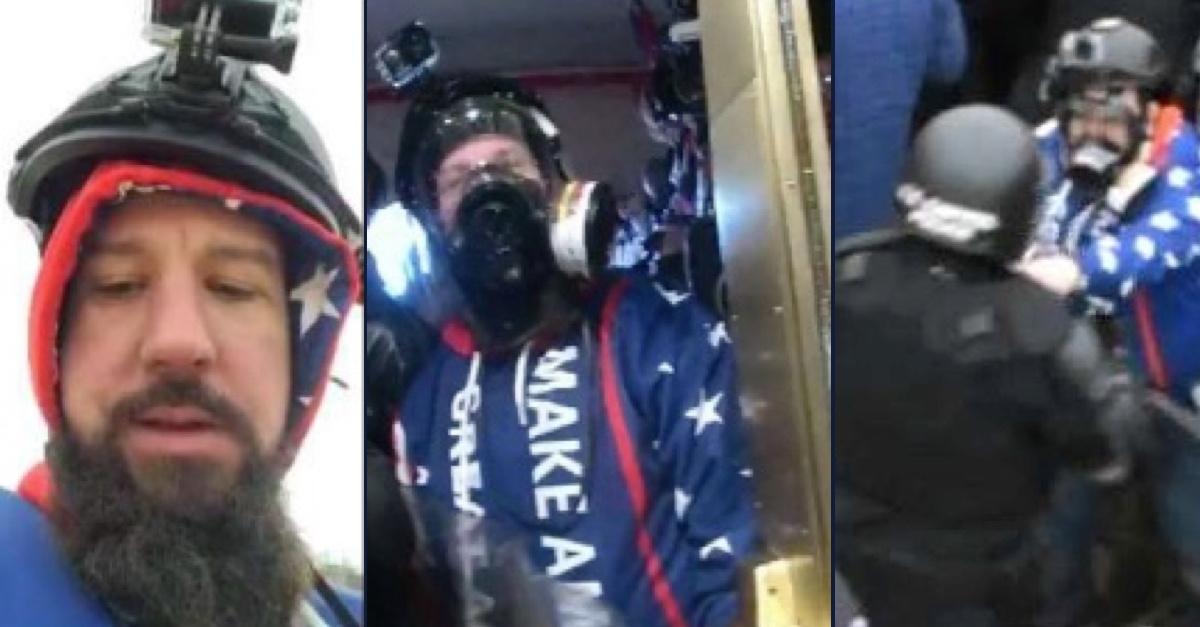 A New Jersey man accused of pushing and assaulting multiple police officers during the melee at the Capitol building on Jan. 6 has filed a lawsuit demanding that he be released from pretrial detention.

Christopher Joseph Quaglin, 36, filed a petition for a writ of habeas corpus on Tuesday accusing U.S. Attorney General Merrick Garland and jail superintendent Ted Hull of treating Quaglin with “malicious indifference” toward his medical condition while he has been held in pretrial detention at the Northern Neck Regional Jail (NNRJ) in Virginia.

Quaglin’s attorney, Joseph McBride Jr., notes that his client has been transferred to six different facilities since his arrest in April of 2021, and “the intensity and duration of his mistreatment grows worse with each transfer.”

Quaglin is named in a nine-defendant complaint that details several alleged assaults against police officers trying to hold back the violent mob at the Capitol on Jan. 6. He is believed to have been part of the crowd that attacked Metropolitan Police Officer Daniel Hodges, who was memorably seen on video trapped between the crowd and a set of doors to the building.

McBride says that his client is the one being attacked.

“Petitioner alleges that his serious underlying medical condition – celiac disease – has been treated with deliberate indifference, which has caused him to suffer irreparable harm,” the complaint says.

“Respondents have also moved Petitioner six times over the course of the past year and have failed six times to feed Petitioner correctly,” the filing adds, noting that Quaglin has lost almost 40 pounds. “This is not negligence, nor is it a mistake, it is purposeful and deliberate torture.”

Citing “disgusting unsanitary living conditions,” including the presence of “black mold, rats, roaches” and being “forced to drink brown and/or black looking water,” McBride says that Quaglin’s constitutional and human rights are being violated.

McBride also alleges that Quaglin has been “purposefully exposed to danger by being housed in notoriously hostile parts of the jails,” and not with others accused in the Jan. 6 Capitol attack.

“Unlike other January 6th detainees who occupy what is called the ‘Honor Pod,’ Petitioner is forced to live in dangerous sections of the jail that are notorious for housing the Bloods, MS-13, and highly dangerous Cartel members,” the filing says. “NNRJ does this to punish Petitioner by making him live in a constant state of fear and anxiety about what may happen to him at any given moment.”

The complaint includes details about email correspondence between McBride and Hull, the jail superintendent. In the emails, Hull repeatedly insists that Quaglin’s rights are being protected, that he is receiving celiac-compliant food, and that it is McBride and Quaglin who are the instigators.

“Documentation reflects that your information is inaccurate,” Hull said in an email sent on March 9. “While there is evidence to suggest that your client is less than compliant with his dietary requirements he is none the less being provided a menu that is consistent with his medical condition.”

Hull said that the one time Quaglin was served a standard lunch was a one-time oversight and an “incidental mistake.”

“Your client did, in fact, incur injuries associated with an altercation with another inmate that initial evidence suggests Inmate Quaglin instigated if not initiated,” Hull wrote in the same March 9 email. “Documentation indicates that he has received immediate medical treatment associated with the incident. Subsequently, he has been examined by the jail physician as follow up to his initial treatment.”

The email exchange between the Hull and McBride escalated from there, with McBride threatening to file a lawsuit if he was not allowed to have a video conference with Quaglin.

You can read Quaglin’s petition below.