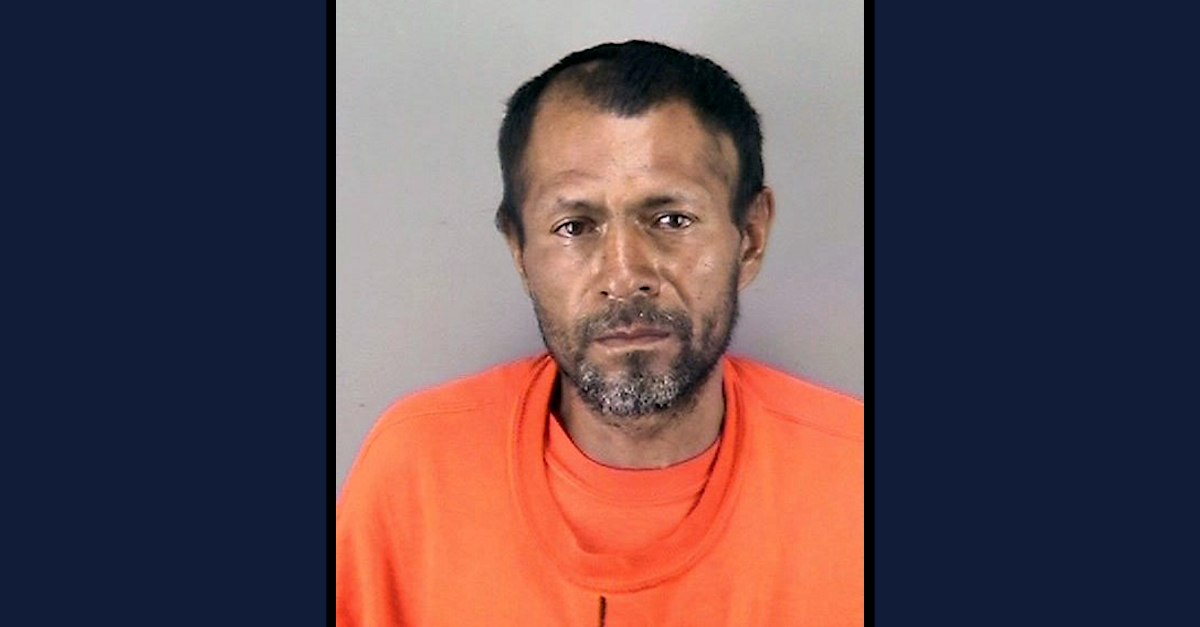 A Mexican national who shot and killed a 32-year-old woman who was sightseeing in San Francisco with her father and a family friend has pleaded guilty to federal immigration and weapons charges.

The guilty plea flowed from a Dec. 5, 2017 federal indictment which surrounded the July 1, 2015 shooting death of Kathryn “Kate” Steinle.

A November 2017 state-level prosecution resulted in an acquittal on homicide charges but a conviction on a firearms charge, the DOJ noted. A California appellate court overturned the weapons conviction “based on the failure of the state trial court to instruct the jury on the state’s affirmative defense of momentary possession,” the DOJ noted; the feds said that ruling (obviously) “had no legal effect on the federal prosecution, which had already been initiated.”

The feds brought Garcia-Zarate before a judge “immediately” after he was released by the state, the DOJ said.

The delay between the December 2017 indictment and the March 2021 plea was the result of mental competency issues, the DOJ further noted. (The court docket indicates those issues dragged on for months and months.)

No plea agreement is in place, the DOJ said. The plea was to the indictment as written. 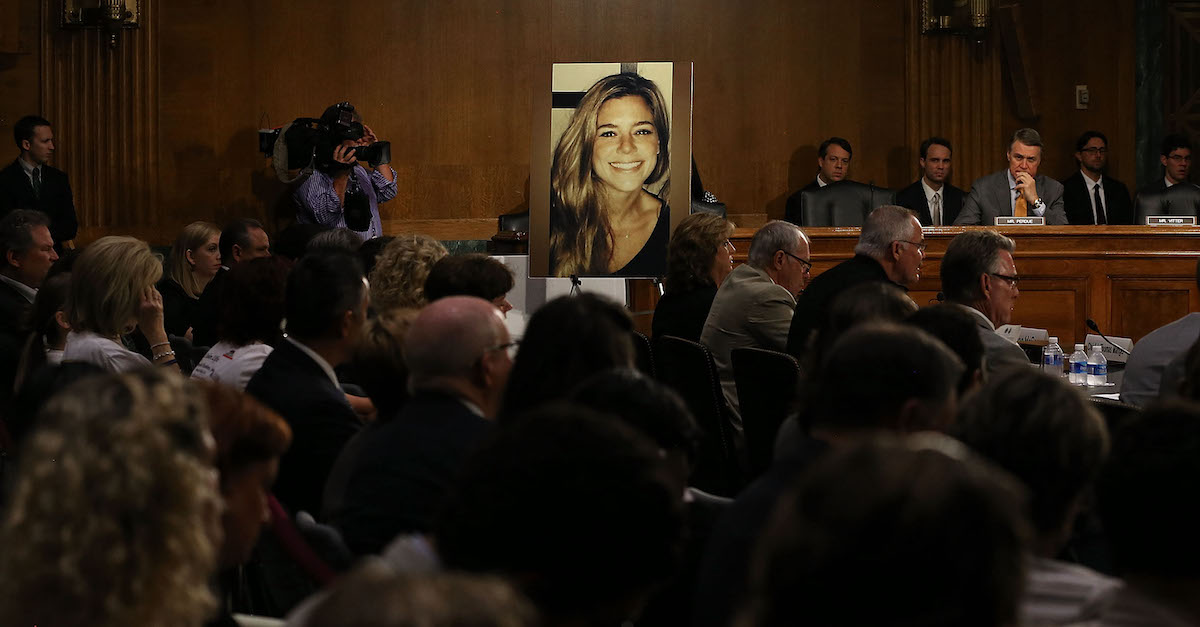 A large photo of Kathryn “Kate” Steinle is shown while her dad Jim Steinle testifies during a Senate Judiciary Committee hearing on Capitol Hill, July 21, 2015 in Washington, D.C. (Photo by Mark Wilson/Getty Images.)

Garcia-Zarate “admitted that on July 1, 2015, he was on San Francisco Embarcadero Pier 14 and possessed a semi-automatic pistol loaded with eight rounds. He admitted he knew he was an alien that was unlawfully and illegally in the United States at the time and that he had previously been convicted of a felony, including the felony of Illegal Re-Entry After Deportation for which he spent more than a year in federal prison,” the DOJ said.

A sentencing hearing is scheduled for June 6, 2022. The defendant faces a maximum possible punishment of 10 years in prison and three years of supervised release.

The state-level trial which resulted in the acquittal and the flipped conviction included tearful testimony from the victim’s father.

Jim Steinle said he heard a loud “bang.” His daughter collapsed in his arms.

“Help me, Dad,” appear to have been her final words, Jim Steinle testified.

By the time his daughter fell to the ground, her eyes were closed, and she had difficulty breathing, Jim Steinle continued.

“I couldn’t figure out what was wrong,” he told the jury while trying to hold back tears. “She didn’t have any health problems.”

He said he rolled his mortally wounded daughter to her side, lifted her blouse, and then saw a bullet hole with little blood.

Paramedics arrived shortly afterward, and Kate Steinle was declared dead at a nearby hospital.

Garcia-Zarate went by the name Juan Francisco Lopez-Sanchez when he was arrested.

During the state-level trial, defense attorneys said Garcia-Zarate found the gun wrapped in a shirt under a chair on the pedestrian pier and that it went off by accident when he picked it up. The gun had been stolen from the vehicle of a federal official before Garcia-Zarate’s attorneys say their client found it.

During a police interview duplicated in an officially unpublished California Court of Appeals opinion, the defendant agreed that he “fired that bullet,” threw the gun into the water, and took off from the scene. His story, however, was riddled with inconsistencies.

The defendant said he was “seated or something like that” and that he was aiming “towards a seal” or a “black fish . . . [a] seal” when the gun went off.

“Well, I just remember that I did this with my hand and I threw it . . . into the, the water,” he said of the weapon, according to the appellate court opinion.

He said he fired “once” when asked “how many times he fired,” according to that opinion.

He also claimed he was about five feet away from the victim he shot, but other testimony established he was 90 feet away, the appellate court opinion states.

He claimed that the gun was in “a rag there, something like that, like a shirt there,” the appellate record continues.

“When I was around there, walking or something I think, or seated, I think I stepped on it and, and it went off by itself and . . . [i]t was like in a big sack, it was heavy and, and, uhm, well it just went off when I was stepping on it. I threw it down,” he told the authorities, again according to the appellate court opinion. “So when I was, uh, either walking, uh, along there was a, a rag and stuff and I stepped on it and then it fired and then I grabbed it and then tossed it.” Defendant affirmed the gun was “on the pier.” When asked why he threw the gun, defendant said, “Because if not it was going to keep firing by itself.”

When asked if he had the gun in his hand, defendant responded, “Yes, because I wanted to hold it back when . . . I got there and I stepped on it with the, the rag, the shirt, wrapped up. I couldn’t hold it back and I didn’t have anything else to throw it down with.” Asked how he shot the gun, defendant had the following exchange with Covarrubias:

Covarubbias: “So when you had the gun in your hand and you fired, you had your jacket like this on top when you fired?”

Covarubbias: “Or did you fire outside like this, pointing?”

Defendant: “Outside because I wanted to hold it back because it was sort of pulling.”

Defendant: “Yes, that was all that happened, that I couldn’t, I couldn’t hold it back and I had to throw it down. And, uhm, and what I saw was that, well, it was something very heavy to be carrying, yes.”

Defendant later added, “Since I’m kind of fat, that’s why it fired on it’s [sic] own and I couldn’t hold it back.”

The defendant continued to assert he “found” the gun where he “was seated.” He said he didn’t mean to fire it and said the gun fired by accident, but he later said “[y]es” when asked if he “made the decision to fire” the weapon.

The full state-level opinion and part of the federal case file are reproduced at the bottom of this report in their entirety.

A federal judge ruled that Jim Steinle’s testimony would be “exclude[d]” from the federal case involving the weapons charges “because the details regarding Kate Steinle’s death are barely relevant to the possession charges, particularly since the government does not contend that Garcia-Zarate intended to shoot her.”

The federal case never went to trial, though, so that evidentiary ruling is moot.

The entire affair became a flashpoint for immigration issues in the United States. Then-U.S. Attorney General Jeff Sessions balked at the state court acquittal and blamed San Fransisco officials — who had enacted so-called “sanctuary city” policies — for what happened.

“When jurisdictions choose to return criminal aliens to the streets rather than turning them over to federal immigration authorities, they put the public’s safety at risk,” Sessions said. “San Francisco’s decision to protect criminal aliens led to the preventable and heartbreaking death of Kate Steinle.”

Then-President Donald Trump also lashed out at the verdict but got the law wrong in the process of so doing, Law&Crime pointed out at the time.

White nationalists erected a memorial to Kate Steinle. Her family asked that it be removed.

Read some of the federal case file below:

[Editor’s note:  some of the punctuation from the state-level appellate opinion duplicated in this report has been cleaned up because the original opinion is filled with extraneous paragraph symbols and other typographical anomalies which make it somewhat difficult to read.  The full opinion in its original format is embedded above.]