Man Who Helped Kyle Rittenhouse Buy His Gun Faces Felony Charge of Evading Police, Allegedly Had Cocaine in His System at the Time 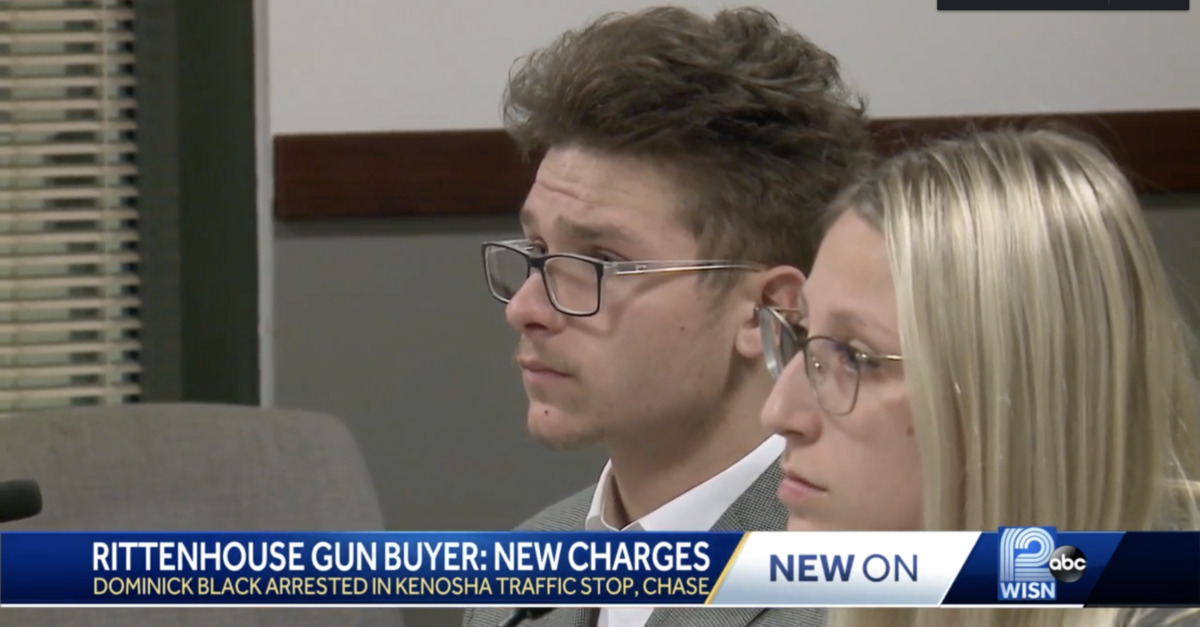 The man who helped Kyle Rittenhouse buy the gun used to shoot and kill three people in Kenosha, Wisconsin, was recently charged with a felony offense completely unrelated to the earlier high profile case.

Dominick Black, 20, stands accused of one count each of operating an unregistered motorcycle, and attempting to flee or elude a police officer. The latter charge is a felony punishable by up to three-and-a-half years in prison. The former charge is a misdemeanor typically subject to small fines.

According to a criminal complaint obtained by Milwaukee FOX affiliate WITI, the incident occurred on May 13, 2022. A Kenosha police officer allegedly spotted the unregistered motorcycle and was able to identify the driver as Black due to having “numerous interactions” with the defendant in the past.

The officer then tried to conduct a traffic stop — to absolutely no avail.

First, the criminal complaint says, the officer tailed the motorcycle exceeding the speed limit by relatively little — going 45 m.p.h. in a 30 m.p.h. zone. The officer says he activated his siren and flashing lights and noticed Black briefly observe what was happening in a mirror. The motorcycle did not slow down, police say, but the driver shook his head in the negative before going way beyond the speed limit.

“The driver after looking in his mirror, shook his head from side to side as if he was shaking his head ‘no’ before rapidly accelerating away from my squad [car].” the officer wrote in the court document obtained by Milwaukee NBC affiliate WTMJ. “The vehicles traveling on Sheridan Rd alongside of the MC, yielded to my emergency lights and siren.”

Then it was off to the races.

After that initial interaction, according to law enforcement, Black gunned the motorcycle to speeds as high as 80 in a 30 m.p.h. zone. Aside from the rate of speed, police say, the defendant was repeatedly and illegally weaving in and out of traffic, riding between lines, and passing vehicles unlawfully. On several occasions, Black allegedly came close to colliding with other vehicles on the road.

According to the Wisconsin State Journal, the officer wrote that Black stopped at one red light for an “extended period of time” and “repeatedly looked in his mirrors to see if I was still behind him after each turn or change of direction.”

With the pursuit by then out on the radio, another officer found Black minutes after the first one lost him. The first officer then identified the defendant and he was subsequently arrested.

According to Milwaukee ABC affiliate WISN, the defendant complained of being hot and needing air while in the back of the squad car. The arresting officer allegedly obliged the request and rolled the window down but then saw Black shaking and appearing to slip in and out of consciousness. Paramedics were then called to the scene.

The defendant was taken to a nearby hospital where blood work determined that he had a trace amount of cocaine in his system; however, medical staff said the small amount of the drug was likely not enough to cause any sort of impairment. Rather, the hospital told police, Black was likely experiencing an anxiety or panic attack.

On Tuesday, the defendant appeared in court for a roughly two-minute-long initial appearance.

State Public Defender’s Office attorney Michelle Knapp asked for a three-week continuance on the case and said her client was looking to hire private legal representation. The court agreed.