Off-Duty Deputy Radioed in His Own Injuries Before Dying in Ambush-Style Shooting: ‘He Loved Being a Deputy Sheriff, and He Was a Good One’ 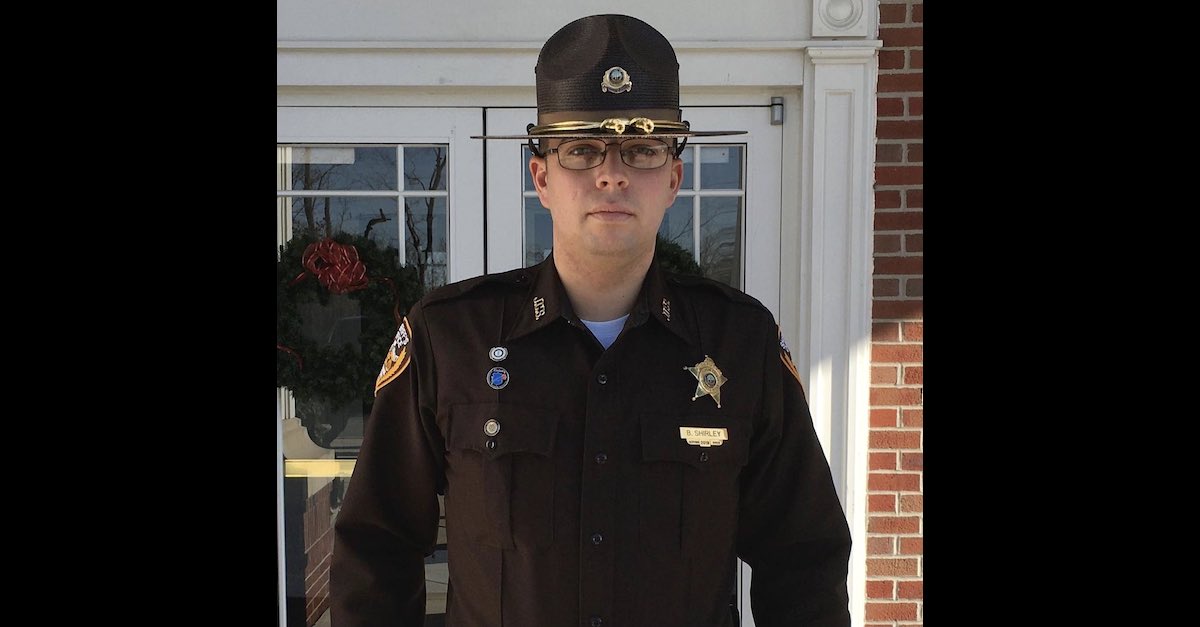 Fallen deputy Brandon Shirley is seen in an image provided by the Jefferson County Sheriff’s Department.

A 26-year-old Louisville, Kentucky-area sheriff’s deputy is dead after what authorities are calling an ambush-style shooting perpetrated against the deputy while he was working an outside security job at a local car dealership.

The victim, Brandon Shirley, was reportedly the one who issued the radio call for help after he had been shot.

Shirley said he didn’t know where he was shot. When dispatchers tried to raise him on the radio about a minute later, he did not respond, the newspaper reported.

Shirley was in uniform, even though he was off duty and seated in his personal pickup truck while working the outside detail, said Jefferson County Sheriff’s Department Lt. Col. Carl Yates. Images captured by the Courier Journal and by local television stations showed evidence markers around a red truck — presumably Shirley’s — positioned near the entrance to a car lot. 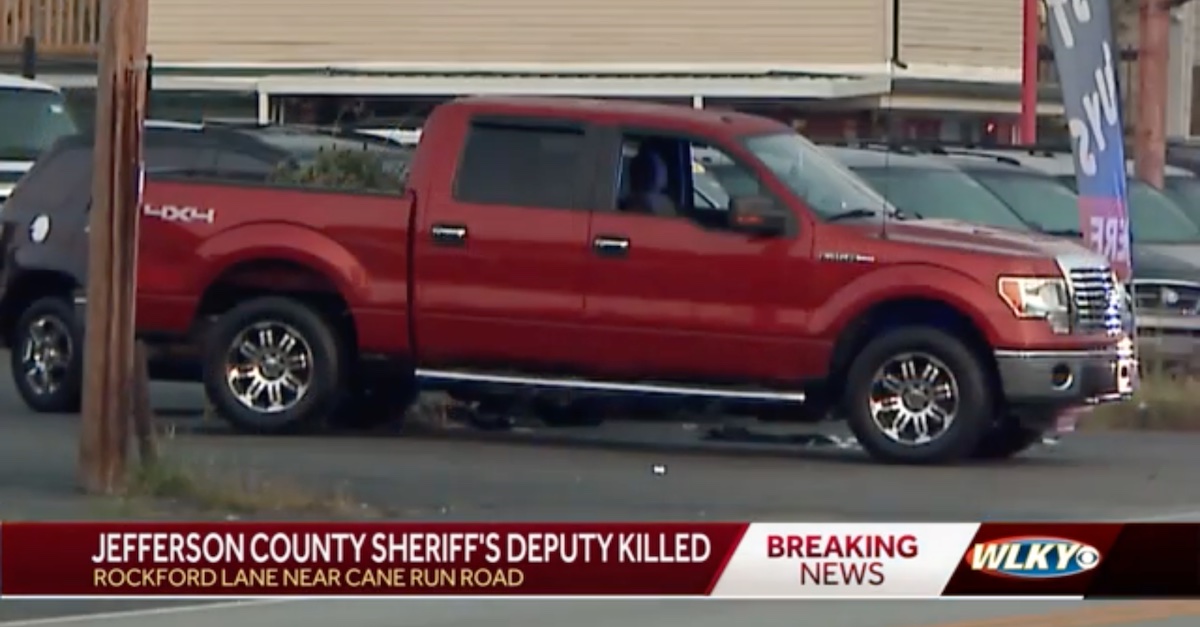 The rear passenger window of another nearby vehicle appeared to be shot out, local CBS affiliate WLKY-TV noted. 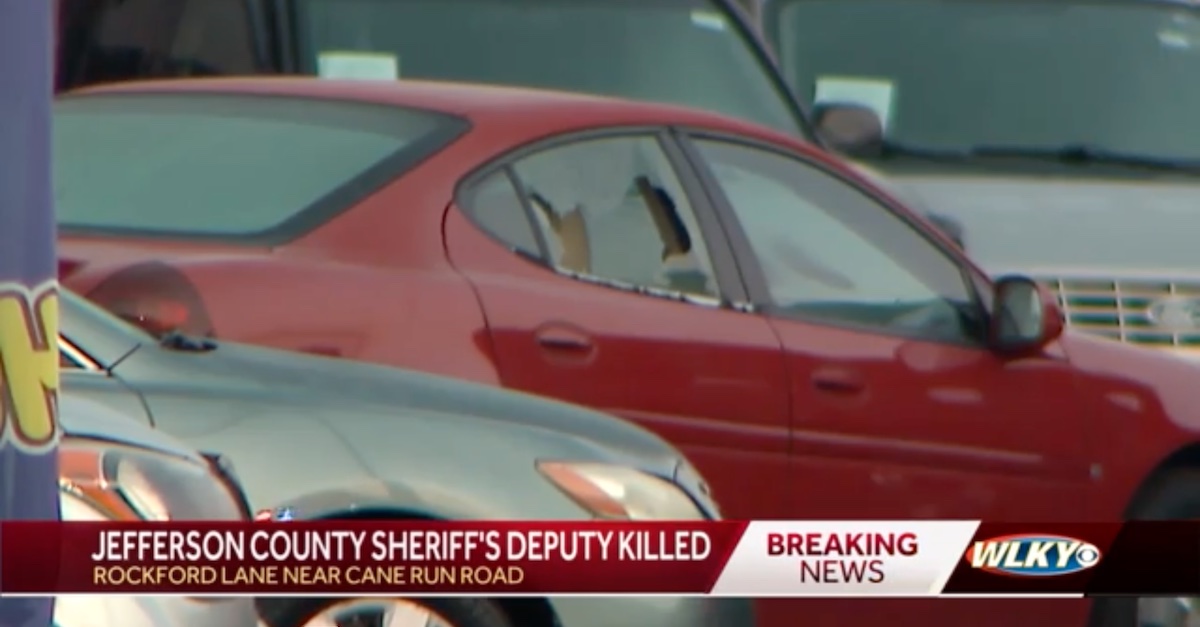 A vehicle parked in the lot Brandon Shirley was guarding appears to have had its rear passenger side window shot out.

Angela Clark Milan, a neighbor who lives near the scene of the shooting, told the newspaper that she retuned home from work at midnight and heard “five gunshots” before police came racing to the scene.

The Louisville Metro Police Department (LMPD), the Shively, Ky. Police Department, and EMS crews responded with life support measures. Shirley was rushed into surgery at the University of Louisville Hospital. Efforts to save his life ended overnight.

A group of law enforcement officials gathered Thursday morning to break the news of Shirley’s passing to gathered reporters and to the broader community.

“I wish I could greet you with the usual ‘good morning,’ but sadly, it is not a good morning,” said a visibly sorrowful Jefferson County Sheriff John Aubrey at a morning briefing. “At approximately 2:30 a.m. this morning, deputy sheriff Brandon Shirley was shot by an unidentified assailant or assailants while working an off-duty security job at Rockford Lane Auto Sales.”

“Sadly, his wounds proved to be too extensive, and he did not survive,” Aubrey said. “On behalf of the men and women of the Jefferson County Sheriff’s Office, I want to express my deepest condolences and prayers to the families and friends of Deputy Shirley. I have requested LMPD to conduct the investigation into this tragic, senseless incident with the full support of my office.”

Shirley joined the force in March 2018 and was a court security officers, Aubrey said. The fallen deputy received a medal of honor the department’s most recent award ceremony. That incident involved the shooting of photographer Tyler Gerth at Jefferson Square Park last year.

“He loved being a deputy sheriff, and he was a good one,” Aubrey said.

When asked if the victim was wearing a tactical or bulletproof vest, Shields said she could not go into that level of detail, citing her desire to build a winning case for prosecutors by withholding certain information from the public — a common law enforcement tactic.

“For police, if someone is determined to kill you, they’re going to kill you, and that was the case here,” she said generally.

Shields said investigators were canvassing the area to obtain video of the vicinity.

She added that the authorities were looking at “a couple of suspects” but could not go into detail.

Yates said Shirley was the fourth member of his department to have been shot and killed in the line of duty. A fifth officer died on the job from a heart attack, he recalled.

“To lose a good deputy is paramount,” Yates said. “To lose one under these circumstances makes it more difficult for everybody. We have a lot of people in the sheriff’s office who knew Brandon well. They’ll be dealing with this as well as the family and friends of his who are not associated with the sheriff’s office.”

Yates noted that many LMPD officers also knew the victim. He described Shirley as a “very active” and “proactive” deputy who was “courageous” and “well-liked.” Those sentiments were backed up by Maj. George Grissom, who is head of the courthouse security detail within the sheriff’s office where Shirley worked.

“Brandon was a hard-working, proactive deputy, really dedicated to his duties at the sheriff’s office,” Grissom said. “Everybody liked him. He was a good person. He was good to be around.”

The chief said that mourning over Shirley’s death must come later for law enforcement: a killer (or killers) is (or are) still at large.

“Grieving comes later,” LMPD Chief Shields said. “We have a job to do . . . we need to keep our focus, and we need to make an arrest.”

[Image of Shirley via the Jefferson County Sheriff’s Department.  Images of the scene via WLKY-TV screengrab.]