‘I Told You Not to Mess with Me’: 5-Year NYPD Veteran Allegedly Shot Her Ex-Girlfriend, Killed Other Woman in Love Triangle 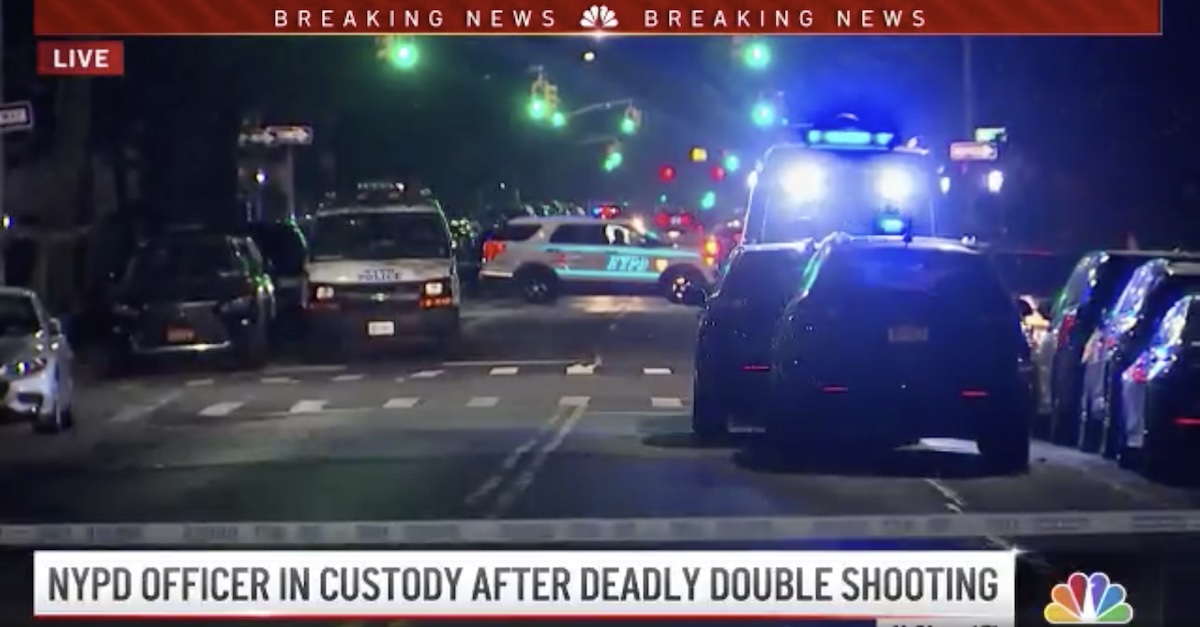 A 31-year-old officer with the NYPD allegedly shot and killed her ex-girlfriend’s new lover at Bensonhurst, Brooklyn home on Wednesday, then matter-of-factly and in a “calm, collected” manner admitted to police that she shot “someone.”

Yvonne Wu is accused of shooting her 23-year-old ex-girlfriend Jenny Li and killing Li’s new love interest Jamie Liang, 24. Wu’s ex survived. Liang was found in the living room, shot in the chest (possibly multiple times); Li was found shot once in a bedroom. Police believe all three parties knew each other and that the suspect was in the residence when the two victims came home. Wu was scheduled to work a night shift hours later.

Here’s the police account of what happened, as obtained by Law&Crime:

An NYPD spokesperson confirmed that Liang, of East 20th Street in Manhattan, was the homicide victim.

He said that the suspect is a 5-and-a-half-year veteran of the NYPD assigned a Patrol Borough Brooklyn South precinct, reportedly the 72nd Precinct. Kemper did not name the officer during the press briefing, but he did say she was in custody and taken to a hospital for an evaluation. He said the motive was believed to be domestic in nature and that the suspect confessed to shooting someone.

“I would describe her as calm, collected and very forthcoming,” Kemper said of Wu. “Simply put, she confessed. That’s all I’m going to say.”

Kemper said that that the residence belonged to a 23-year-old woman, who he believed to be Wu’s ex-girlfriend. Video at the scene from earlier in the day showed Wu being taken into custody.

NEW VIDEO: cell phone footage shows Officer Yvonne Wu being frisked and arrested after investigators say she confessed to killing her ex girlfriends new partner, Jamie Liang, at a Bensonhurst home. Wu was off duty at the time. @PIX11News pic.twitter.com/iTRySVjRQ0

Subsequent reporting from the New York Daily News and New York Post said that when Jenny Li called 911, Wu could be heard in the background yelling “I told you not to mess with me!” and “That’s what you get”— even as the victims pleaded for their lives.

Kemper said he could not confirm that the weapon was a service weapon, but he did say the weapon and ballistic evidence were recovered at the scene.

The Daily News quoted an unnamed friend of Liang’s, who called Wu a “psychopath.” The friend said that Wu and Li broke up about a month ago:

One of the dead woman’s friends told the Daily News that Li and Wu lived together in Bay Ridge until about a month ago, when they broke up.

“She was possessive. Jenny Li just couldn’t take it anymore,” the 21-year-old friend said. “This cop is a psychopath. She was stalking her ex for a month.”

Wu was sitting on Li’s bed when she and her new girlfriend came home, the friend said.