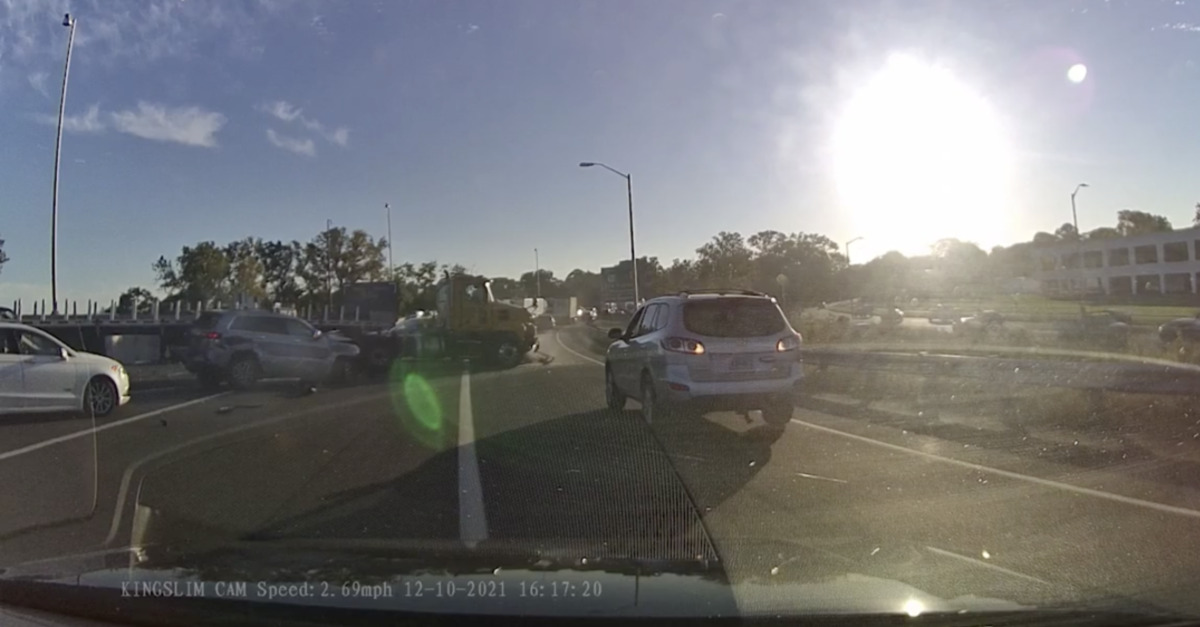 A Connecticut man has been arrested in connection with the carjacking of a tractor-trailer unit that occurred in the middle of a busy interstate highway on Tuesday evening.

Frank Montes-Rivera, 50, stands accused of eight separate crimes related to the incident–including one charge of robbery by carjacking.

“I see there’s a guy hanging on the window and he’s punching and grabbing at the guy in the cab and they’re fighting,” a witness told local ABC affiliate WTNH.

According to Connecticut State Police, troopers received multiple 911 calls about a pedestrian running across the southbound lanes of I-95 toward an exit for New Haven. Shortly thereafter, the very large vehicle had been hijacked and began to barrel across lanes of traffic.

The ensuing traffic situation was chaotic to say the least.

According to WTNH, Montes-Rivera “plowed through several cars across three lanes in bumper-to-bumper traffic,” before the tractor-trailer was sapped of momentum and/or space to move any further.

“The cars were skidding and twisting the bumper pieces were flying off,” the witness, who is also the outlet’s chief of operations, added.

After the unit was at rest, the situation allegedly continued to spiral.

CSP Trooper Horatio Hinds arrived on the scene and approached the erratic driver from the passenger side of the tractor-trailer and allegedly attempted to speak with him, police claim. Instead, Montes-Rivera allegedly lunged at Hinds. The officer then used his Taser on the suspect, causing Montes-Rivera to spill out of the tractor-trailer’s driver’s side door and fall onto the highway.

State’s Attorney Inspector Herb Johnson happened to be stuck in the smoke-filled traffic jam at the time and then rushed over to help Hinds. The two officers then got into a physical altercation with Montes-Rivera before he was eventually subdued and arrested.

“Luckily, there was a retired police officer who was in traffic and he got out of his vehicle to assist the trooper and got into a struggle as well,” New Haven Police Chief Renee Dominguez said Wednesday morning. “Minor injuries, but was injured, and then the call went over the radio, and our police department was able to respond and was able to subdue the individual and make the arrest.”

Police allege that Montes-Rivera broke Johnson’s holster “[d]uring the course of the struggle” as the defendant was attempting to disarm the officer. He failed but Johnson allegedly suffered a minor injury. Hinds was unharmed.

In addition to the robbery via carjacking charge, Montes-Rivera is facing one count each of: (1) interfering with an officer; (2) assault on public safety; (3) breach of the peace; (4) disorderly conduct; (5) reckless endangerment; (6) assault; and (7) assault with a motor vehicle.

The defendant was processed at the hospital and is being detained on a $100,000 bond.