Anthony Jolson Blamed the Devil After Murdering His Father: Cops

‘I Did Something Really Bad’: Man Charged with Murdering Father by ‘Sneak’ Attack After Obsessing About the Devil and COVID-19 Vaccines 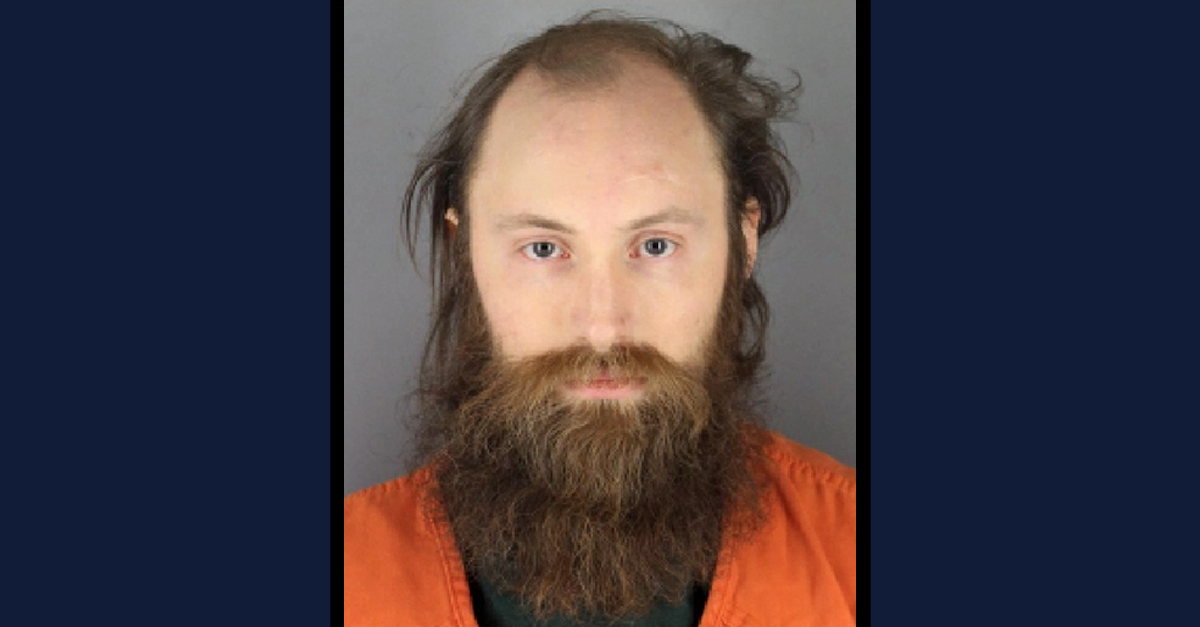 A Minnesota man is due to appear in court on Tuesday afternoon to face second-degree murder charges in connection with the alleged murder of his father.

According to court records, Anthony Ryan Jolson, 33, of Minneapolis killed his father by beating him over the head with a hammer and stabbing him to death with a kitchen knife in a “sneak” attack inside the home they shared. The incident occurred after Jolson engaged in an obsession about the devil, the occult, and COVID-19 vaccines, his brother told the police. The attack was so violent that blood spatter was seemingly everywhere; pieces of the father’s skull were located by investigators in two separate rooms of the house.

According to Hennepin County jail records, Jolson is charged with second-degree murder in connection with the slaying. Jolson was booked at 2:03 a.m. on Jan. 14, 2022, after being arrested by the Minneapolis Police Department. He’s being held on a $1 million bond. Second-degree murder in Minnesota is an alleged murder which occurred with intent but without premeditation. According to court records, the charge also carries a modifier because the defendant allegedly used at least one deadly weapon.

According to a probable cause statement, police officers responded to a house on Elliot Avenue just south of East 47th Street in Minneapolis at about 9:00 p.m. on Jan. 13, 2022. The call was for “unknown trouble.”

The police forced their way into the house “and eventually detained” the defendant “after some resistance.”

Inside, officers found the father on the living room couch.

“There was a large amount of blood,” and the father’s “face was heavily swollen and lacerated,” the probable cause statement indicates.

The brother said only he, the defendant, and their father lived at the home along with two dogs. The brother reported that he had gone ice skating on the day of the killing. When he returned home, the defendant met him at the door. Specks of blood were on the defendant’s forehead, according to the court document.

“I did something really bad,” the defendant allegedly told his brother.

The brother told the police he tried to remain calm and tried to keep the defendant calm.

The defendant then told his brother he had met his father with a “surprise” or “sneak” attack by hitting the father with a hammer and stabbing him.

The brother relayed to the police that the defendant “had been recently acting paranoid and had been talking about the devil, occults, and how the COVID vaccine was a part of this.” The brother said the defendant had also been calling both of his familial housemates the “devil.”

The documents do not further expound upon the defendant’s alleged theories.

The brother fled the home because he was scared. He called a relative and hid outside until the relative arrived to help him.

The police then learned that the defendant had placed two phone calls to a neighbor — one at 9:17 p.m., the other at 9:24 p.m. — to report that he needed help. The defendant summoned the neighbor to the crime scene but “was talking slowly and not making much sense,” according to the neighbor’s re-telling of the situation. It is unclear from the records what actions the neighbor took — other than to relay the information to the police.

Emergency medical services personnel declared the father dead at the scene. The probable cause statement explains his injuries:

Victim was seated on the couch, slumped over with obvious signs of trauma to his head and neck area. There was a large amount of blood on Victim’s head, neck, and chest. Evidence of blood cast-off was seen around the room and on the ceiling. Fragments of Victim’s skull were located on the floor of the living and dining room areas. A hammer with blood-like substance was located in the living room, and a kitchen knife with blood-like substance was located on an end table in the living room.

The Hennepin County Medical Examiner’s Office later confirmed “many injuries” to the father, including stab wounds to the neck and upper chest; the father “also had visible fractures to the front and top of his head.”

The charging instruments are below. Jolson is due in court at 1:30 Central time on Tuesday for an initial appearance.