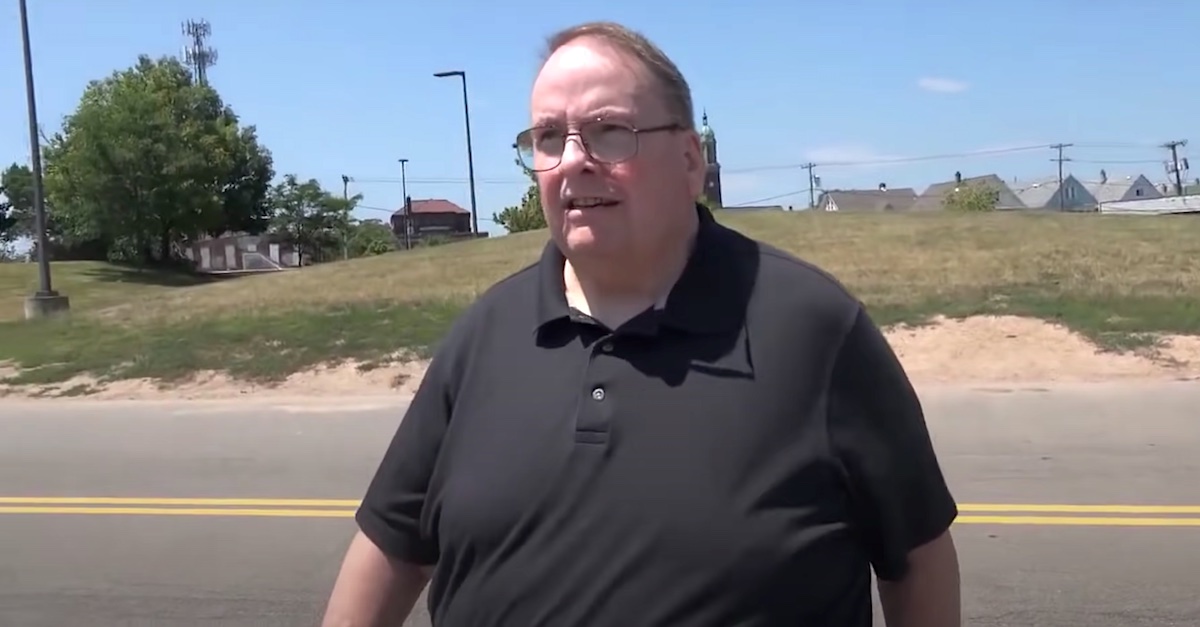 A man caught in an online sting operation by a group which tracks child predators was later identified as Richard W. Scherer by the U.S. Department of Justice.

A former self-proclaimed “sexual education” teacher who worked for more than two decades in a Maryland elementary school is charged federally with enticing a minor and possessing child pornography after a video sting operation by an advocacy group ended with an arrest.

According to the U.S. Attorney’s Office for the Western District of New York, Richard W. Scherer, 70, now of Depew, N.Y., began communicating with who he thought was a 13-year-old girl.  The girl was really a member of a “citizens group known as Predator Poacher[s]” who recorded the entire conversation and later confronted Scherer on camera in a shopping plaza parking lot, prosecutors said.  From a U.S. DOJ press release:

The group maintains several online accounts that purport to be minors of various ages, using the accounts to chat with adults who later meet for sexual contact. These contacts are recorded, the individuals interviewed, and the videos then posted to the group’s platforms. A member of the group made contact with Scherer on . . . Instagram . . . . The defendant believed the member was a 13-year-old girl. The communications between the two were sexual in nature and culminated with a planned meeting at a retail store on Amherst Street in Buffalo. When Scherer arrived, the group confronted him outside the store and interviewed him for about 58 minutes, during which he allegedly admitted that he is a pedophile. The Buffalo Police were called following the interview.

The U.S. Attorney’s Office said the communications occurred between April and June and “became graphic and sexual in nature.”

“[T]he defendant mentioned he was a teacher, who taught sexual education in the past,” prosecutors said.

Again, per prosecutors, here’s how the sting unraveled:

On June 27, 2021, Scherer arranged to meet the purported 13-year-old girl the following day, and when he showed up for that meeting, the defendant was confronted by members of Predator Poacher. The final text from Scherer was “I’m here.”

Prosecutors added that Scherer “also communicated with a purported eight-year-old girl through Predator Poacher, during which the communications also became graphic and sexual in nature.”

A 53-minute video on YouTube appears to show the sting operation in action.  In it, a man wearing a red shirt approaches a man wearing a black shirt in what is advertised as a Buffalo, N.Y. grocery store parking lot.  The man in the black shirt answers to the name “Richard” — he’s presumably now the defendant in the federal case — and the man in the red shirt tells the suspect the entire operation was a sting.  The man in red, who was behind the operation, asks the suspect to converse off to the side of the lot for privacy.  The suspect admits that he asked who he believed to be several young girls to masturbate online.  The suspect agrees he was “sick” but said his conduct was “kind of fun.”  He also admits some of the communications from the alleged girls “sounded odd.”  He argues that the group which allegedly ensnared him had many of its facts wrong about his family and his possible business connections.  He also claims the girls reached out to him — suggesting they, not he, were the ones at fault.  Later, he complains that a girl named Nina — who apparently was a real girl who tipped Predator Poachers off to the suspect’s conduct — tried to convince him that the decoy account was a real girl.

“I find it exciting for them to be doing it for the first time,” the suspect in the video added.  He admitted it turned him on “a little bit” and said the age of consent in New York should be lowered. 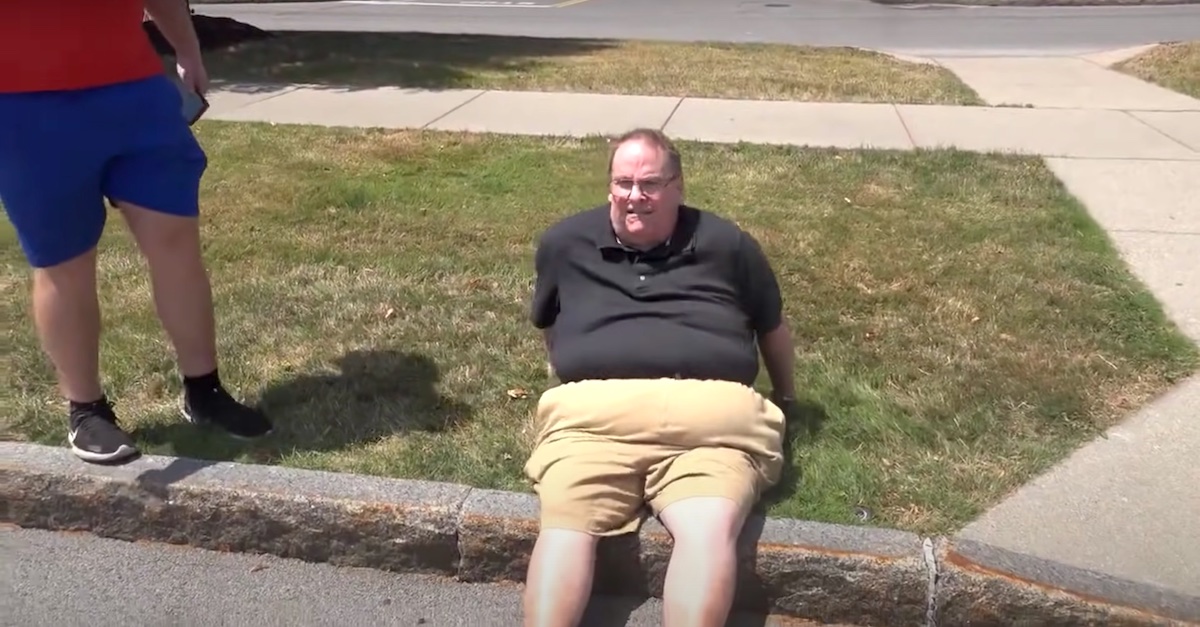 A man later identified as Richard W. Scherer by the U.S. Department of Justice asked to sit down during a sting operation conducted by a group called “Predator Poachers.”

Though Scherer was arrested in Western New York State, he taught for “approximately 25 years” in Montgomery County, Maryland Public Schools (MCPS). His track record of employment did not end well, prosecutors said. A press release recapped what they uncovered:

A report obtained from the school system during the investigation stated, “On June 13, 2011, the parent of a 4th grade student, [redacted by MCPS], came to the school and made a report to an assistant principal about some concerns she had regarding possible inappropriate behavior by Mr. Scherer while interacting with students.” The report stated that the student related that when the defendant has lunch with a particular student, “he pulls her to him and hugs her, that he has patted her rear end and hips, and that he pressures her to each lunch with him.” The parent advised that her daughter and the daughter’s friend are often pressured to each lunch with Scherer.

In September 2011, the Superintendent of Montgomery County Public Schools sent a letter to the State of Maryland Superintendent of Schools. The letter stated, “this is to notify you that Mr. Richard W. Scherer, an English for Speakers of Other Languages (ESOL) teacher for Montgomery County Public Schools, resigned after notice of allegations of misconduct involving a student. I recommend that Mr. Scherer’s certificate be revoked.”

That’s how prosecutors characterized the conclusion of Scherer’s career.  However, a May 12, 2012 memorandum on the MCPS website contains Scherer’s name on a list of individuals who “are retiring or have retired.”  Members of the Board of Education said in that nearly ten-year-old memo that they wished to “express their sincere appreciation to each person” on the list of retirees “for faithful service to the school system and to the students of the county,” for “outstanding performance of duties and dedication to the education of our youth,” and for having “made a significant contribution to the school system” that was “worthy of special commendation.”  The memo also wished to “extend to each one best wishes for the future.”

The archives of the Washington Post indicate that Scherer was interviewed for a story about American schools opening a “new world” for child immigrants in Dec. 2001.  The piece quotes Scherer as saying staff meetings with renewed focuses on the learning needs of non-native students and a concomitant teaching course gave him a “clearer path of where I need to get the kids.”

“There is so much these kids need to learn you can get overwhelmed about where to start,” he reportedly said at the time.

The Post reported that Scherer as a teacher in 2001 was giving his third through fifth grade students “tours of the facilities,” including “bathrooms” and “water fountains,” after “a student asked to get a drink of water and went all the way home to get it” rather than to a fountain within the school.

In the video cited above, the man caught in the sting — again, apparently Scherer — said he never was attracted to his own students and never targeted them.

According to charging documents now on file in federal court, Scherer made several admissions to the FBI after the sting operation resulted in his arrest.  He also allowed federal agents to search his phone.  Text message logs are part the full criminal complaint, which is included below.

“A search of the defendant’s cell phone recovered two images of child pornography,” prosecutors said in a press release.

The U.S. Attorney’s Office asked additional members of the public who may have information related to this case to call the FBI at 716-843-1680.

Law&Crime reached out to MCPS officials on Saturday with several questions:  (1) whether the district was planning an investigation or any outreach to determine whether any victims may perhaps exist in Maryland; (2) why the May 12, 2012 retirement announcement which contains the defendant’s name contains platitudes of praise given the information prosecutors alleged they uncovered Scherer’s departure from the district; and (3) if the district wished to add any additional comments.

On Sunday afternoon, the district responded as follows:

While we do not have a comment on the news of the arrest and the charges as it did not occur in our district, Montgomery County Public Schools takes all allegations of child abuse and neglect very seriously. We hold our employees to a high standard of character and do not tolerate such behavior. The safety of our students is our top priority and we are committed to ensuring we maintain a safe learning environment for all.

Editor’s note:  though the defendant’s alleged social media handles are contained in both the DOJ press release and in the attached court documents, Law&Crime is not reproducing the account names within this report because there is a discrepancy in the typography between the DOJ press release and the federal court records.  One of the accounts appears to no longer exist, and the other does not appear to depict the defendant.  A Saturday morning call to a spokesperson for the relevant U.S. Attorney’s Office has not been returned.

Additional note:  this piece was updated on Sunday, Aug. 1, to contain a response from the school district.