Colorado Man Murdered His Fiancée, Then Died by Suicide as Their 6-Year-Old Child Watched: Police 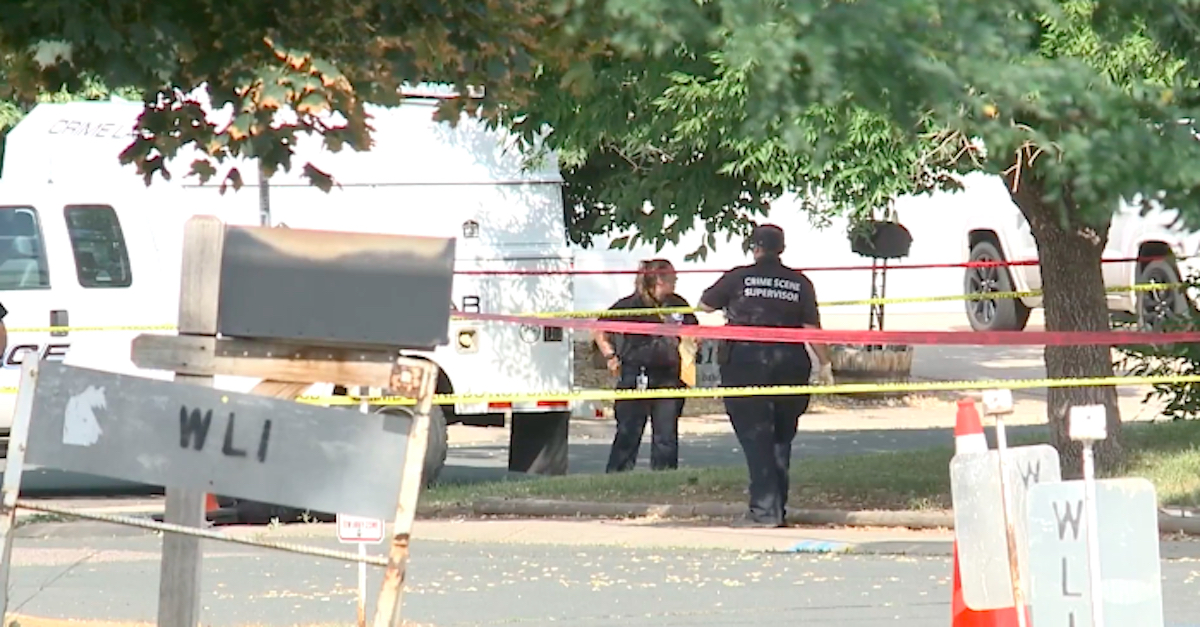 Investigators at the scene where Robert Terry murdered his wife then committed suicide.

A man in Colorado fatally shot his fiancée more than a dozen times then used the weapon to take his own life, all while the couple’s 6-year-old son watched in horror, FOX-affiliated news station KDVR reported Wednesday.

According to the report, 49-year-old Robert Terry shot Sarah Terry Smith 17 times after the two fought on Friday, July 30. Smith’s brother, Alan Smith, told the station that police said his sister was in her vehicle with the couple’s son Andrew in the backseat when the grisly murder-suicide unfolded.

“I guess she was trying to flee. Robert came out and discharged his firearm 17 times at her, striking her in the head twice. He turned the gun on himself and took his own life. Right in front of Andrew,” Alan Smith told KDVR in an interview. “Andrew got out of the back seat and had to walk across the street to notify somebody about what happened.”

Alan Smith also told the station that his sister and Terry had an on-again, off-again relationship, having twice been married and divorced. But he told the station that the two had recently reconciled and were planning to get married a third time. He noted that the pair had their problems, “like every relationship does,” but said he “cannot believe [Terry] could bring himself to do this,” calling the situation “absolutely devastating,” according to KDVR.

“Please pray for the family and Andrew that he can cope and god will turn this into a positive somehow,” he told the station through tears.

Prior to moving to Colorado, Sarah Terry Smith lived in St. Augustine, Florida where she worked as a police officer. Since arriving in Aurora, she had worked as a welfare fraud investigator for Arapahoe County Human Services.

“Arapahoe County mourns the untimely loss of Sarah Terry, a senior welfare fraud investigator in our Human Services department who was killed in a domestic violence incident that happened last week,” Arapahoe County said in a statement. “Sarah was a beloved and respected colleague to everyone she encountered, and all of us in the County extend our deepest sympathies to her family and friends. This tragedy demonstrates the insidious nature of domestic violence and the devastation it wreaks on victims such as Sarah. As we continue to dedicate ourselves to providing support around this issue and seeking remedies for it, we ask everyone to respect the Terry family’s privacy during this difficult time.”

Sarah’s brother told the station that he hopes some good can come from his sister’s untimely death by shining a light on victims of domestic violence.

“If you guys know of anybody that is going through a situation of domestic violence or you are yourself, please, please, go to a domestic violence shelter and ask for help. Because it can turn tragic in the blink of an eye,” he said.