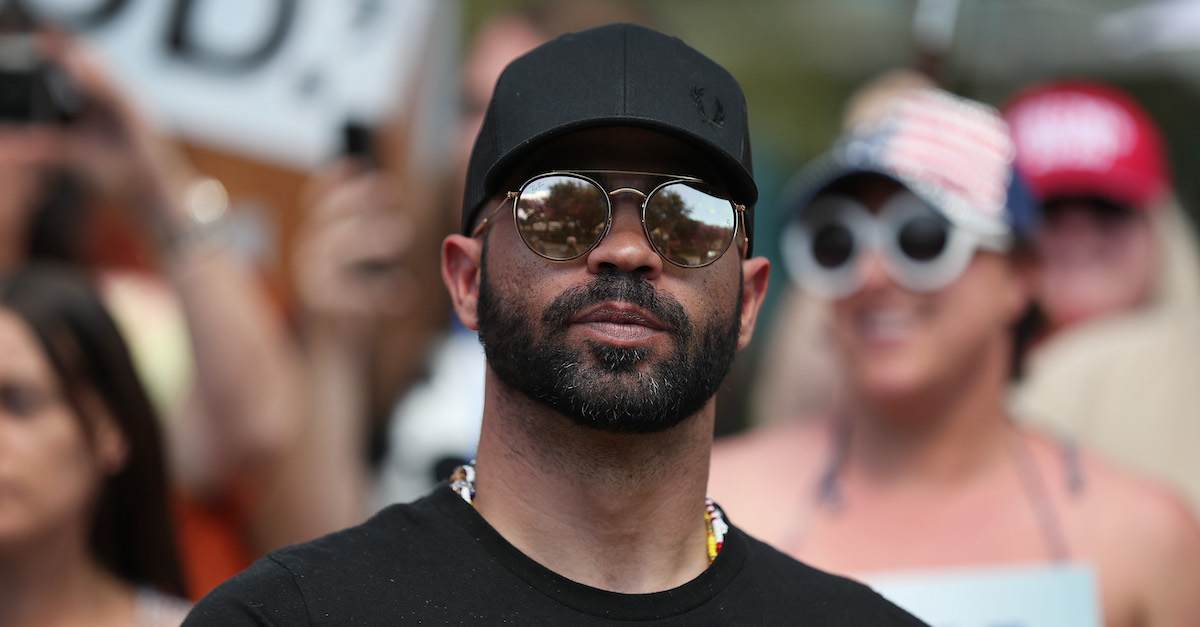 Enrique Tarrio, the leader of the Proud Boys charged with conspiracy in the Jan. 6 attack on the Capitol, will stay behind bars pending trial.

Tarrio was arrested on March 8 and charged with conspiracy, obstruction, and assault in connection with the Jan. 6 attack on the U.S. Capitol by Donald Trump supporters. The riotous mob overwhelmed police forces and swarmed the building, causing Congress to temporary halt its certification of Joe Biden‘s win in the 2020 presidential election.

At the time of his arrest, the DOJ’s indictment said that Tarrio had met with Stewart Rhodes, founder and leader of the right-wing Oath Keepers militia group who has been charged with seditious conspiracy, in a D.C. parking garage.

The government’s detention memo, filed Monday, provides more information on that meeting, including that it was recorded by filmmakers who were present.

Tarrio was released at approximately 5 p.m. on January 5, after having been ordered to leave the District of Columbia. Tarrio did not immediately comply with the order. Instead, he travelled to an underground parking garage, located in downtown Washington, D.C., where for approximately 30 minutes he met with a group of individuals that included Elmer Stewart Rhodes III, the founder and leader of the Oath Keepers. A documentary film crew was present in the garage and, at one point, picked up audio of a person referencing the Capitol. While in the parking garage, Tarrio told another individual that he had cleared all of the messages on his phone before he was arrested. Tarrio further stated that no one would be able to get into his phone because there were ‘two steps’ to get into it.

Tarrio had been arrested for burning a Black Lives Matter flag stolen from an historically Black D.C. church in December of 2020.

Ahead of Jan. 6, Tarrio made it clear to other leaders of the Proud Boys group that the ultimate goal was to get inside the Capitol building.

Throughout the night of January 3 into January 4, Tarrio and other MOSD leaders discussed logistics for January 6. On January 4, Tarrio posted a voice message, at 7:36 a.m., to the MOSD Leaders Group, where he stated, “I didn’t hear this voice note until now, you want to storm the Capitol.’ In context, this message was posted in response to the January 3 post that the main operating theater should be where “all of the votes are taking place and all of the objections.’ Tarrio’s message regarding storming the capitol was posted in the MOSD Leaders Group, where all of the MOSD leaders would have seen it.

Although Tarrio wasn’t at the Capitol on Jan. 6, prosecutors say he was directing the Proud Boys’ operation there.

“Communications among the group were clear,” the government’s detention memo says. “MOSD members were looking to Nordean and Biggs to take charge on the ground. And Nordean and Biggs were coordinating—and deferring—to Tarrio.”

Read the government’s detention memorandum below.

This is a developing story. Check back for updates.