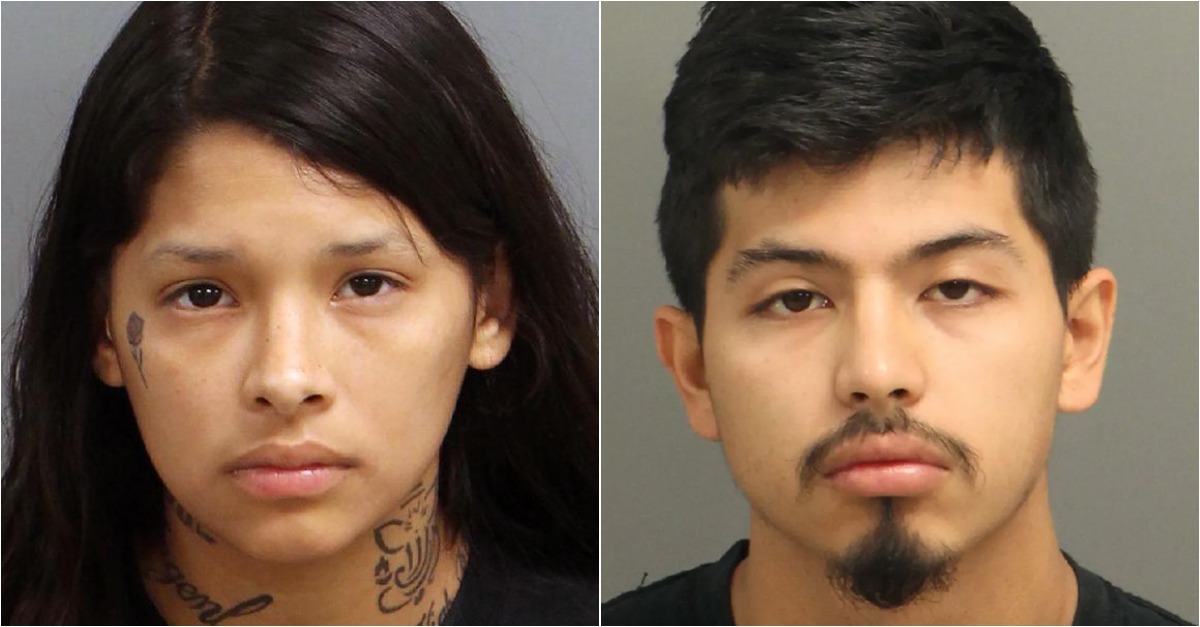 Two additional teenagers have been arrested in connection with the graveyard murder of a 69-year-old man in North Carolina.

Johnathan Daniel Villanueva-Galer, 19, was charged in the May 28 murder of James Lacy Taylor. A juvenile petition has also been filed against a 16-year-old who is not currently being publicly identified.

Maria Elizabeth Peña-Echeverria, 18, was arrested by the Raleigh Police Department on Saturday night–immediately prompting national attention onto the mysterious and macabre case.

“This was not a random act,” Raleigh Police spokesperson Laura Hourigan recently told Fox News. The department has so far, however, declined to offer any details about the potential motive.

A 911 call from a man on the night of slaying was recently obtained by the Charlotte News & Observer in which the caller described seeing three people, a woman and two men, run out of the Mt. Olivet Baptist Church Cemetery last Friday night. The caller says the trio eventually split up and left in a dark-colored pickup truck and sedan.

“I work down here for the N.C. State lab and when I got here, two cars pulled away,” the caller said, noting that they had gone to the cemetery as a matter of course in order to check on some animals.

The Carl Alwin Schenck Memorial Forest is a 245-acre forest located in western Wake County–near the site of the alleged murder. Roughly 10 minutes away from North Carolina State University and known locally as simply “Schenck,” the forest is managed by the university as as a teaching and research area for students.

According to Greenville-based CBS affiliate WNCT, the caller also told dispatchers that he discovered clothing on the ground, which prompted him to initially believe the absconding individuals were “messing around.”

More telltale than the clothes or the speed of their exit, the caller said, was a trail of blood leading into the cemetery.

That blood reportedly led the university employee to “a pair of black latex gloves, two shoes and a pair of pants and a splatter of blood about two feet wide on the ground.”

Taylor was discovered seriously injured by first responders who transported him to a nearby hospital where he was declared dead.

“We talked airplanes and helicopters and flying and trying to get each other to be the best person they could be,” Taylor’s friend Steve Conerly told Raleigh-based CBS affiliate WNCN. “I always thought I could go fly with him again, and I can’t.”

A model aeronautics enthusiast, Taylor was a member of the Raleigh Aero Masters with Conerly and David Hogue.

“[O]ne of the nicest people you’ll ever meet,” Hogue said, describing his friend, known to him as J.T., who is now gone forever. “Always willing to help you, always willing to loan you any tools. He’d give you the shirt off his back, quite literally, if you needed it.”

Memorial Day was especially hard for Conerly and Hogue, they said, as they came together to fly their model airplanes.

“I’ve been thinking about him a lot today,” Hogue told the outlet.

The exact cause of death has yet to be released by authorities who claim that doing so might jeopardize their ongoing investigation.

Villanueva-Galer and Peña-Echeverria are both currently being held at Wake County Detention Center.

Peña-Echeverria recently appeared in court for an initial appearance. Lasting less than a minute, she requested and was assigned a public defender after being apprised of being charged with murder in the first degree. Her next court date is slated for June 21, 2021.