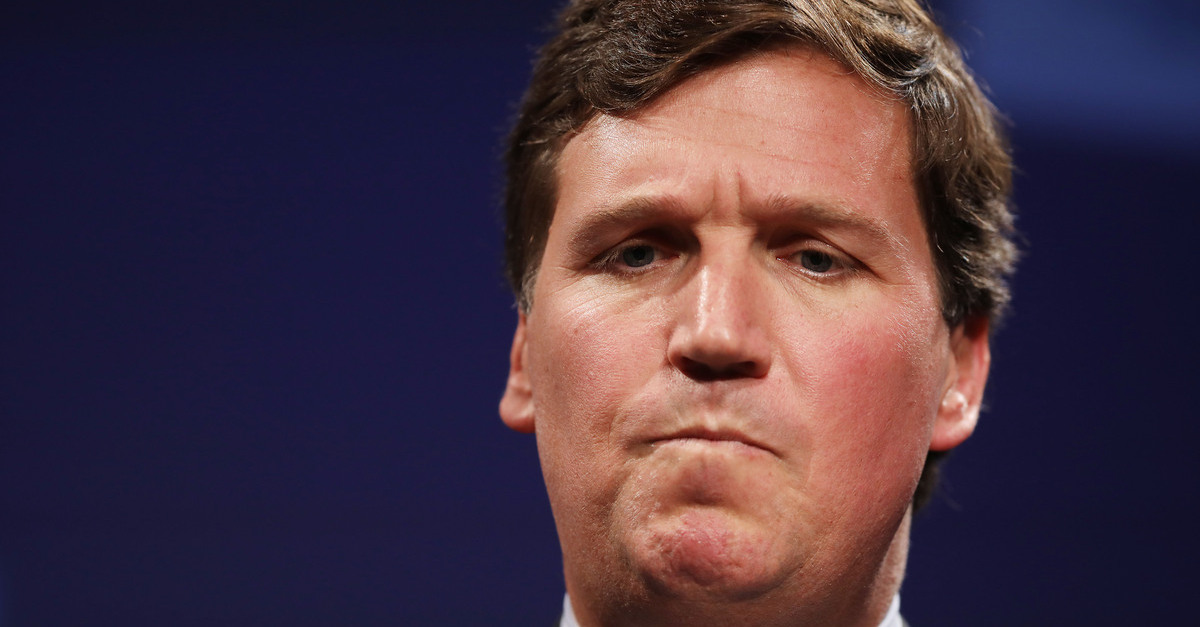 Don’t look now, but Fox News host Tucker Carlson is now throwing around the phrase “Medical Jim Crow,” ostensibly to make a point about how private businesses should ignore whether their patrons have been vaccinated against COVID-19.

For the record, here’s an excerpt from Carlson’s rant:

Everybody agreed that segregation was the worst thing this country ever did. Forcing certain categories of citizens into separate, lesser accommodations, barring them from public places, treating them like lepers or untouchables. That was completely immoral and wrong. We were told that a lot and most of us strongly agree. It was wrong. So imagine our confusion today looking out across the country. The very same people, literally the very same, who told us that segregation was immoral are now enforcing segregation.

Should we be surprised? Probably not, but we still are. Just this morning the New York Times informed us that unless you can prove that you’ve taken the injections that the Democratic party demands you take, you are no longer permitted in bars, comedy clubs, even some dance competitions in the state of New York.

Medical Jim Crow has come to America. If we still had water fountains, the unvaccinated would have separate ones.

I’ve got to address this “Medical Jim Crow” thing before it goes any farther. It’s not only a deeply offensive reference, but also a spectacularly lousy analogy, legally and historically speaking.

“Jim Crow laws” — nicknamed after the 19th century blackface minstrel character and the corresponding pejorative term for Black people — are state and local statutes that once codified racial segregation. Many originated from the “Black Codes” adopted in the wake of the Civil War and ratification of the 13th Amendment. These laws provided detailed and strict rules about how formerly enslaved people could work, travel, and live. In the century that followed, even more such statutes were adopted. They mandated segregation in every aspect of life from public school to marriage.

Shamefully, American legal institutions all the way to the nation’s highest bench long supported these laws. The Supreme Court in Plessy v. Ferguson held that segregation was constitutionally allowable so long as the separate facilities provided for each race were equal. That 1896 logic was not rubbished until 1954. Eventually, the Supreme Court came to its senses, reversing Plessy on the grounds that “separate but equal” facilities were illogical — they are inherently unequal.

Tucker Carlson’s on-air tirade bastardized civil rights law by claiming people cannot legally be separated.  What Carlson left out is the basis for segregation that was created by Jim Crow laws and was subsequently struck down by the body of civil rights law that eventually developed. From the 13th, 14th, and 15th Amendments to Brown v. Board of Education, the conversation wasn’t about the general concept of separating people into groups. Rather, the issue was whether race was a proper basis for separating people to be treated differently under the law.

Ultimately, the law evolved such that race became an unacceptable characteristic upon which to segregate individuals. Because race is an immutable, unchangeable, and innate physical aspect of a person, laws that sequester people on that basis almost always violate constitutional guarantees of equality. Race isn’t the only characteristic that’s been deemed inappropriate for disparate legal treatment: gender, national origin, and religion are also on that list.

However, plenty of other classifications are alive and well within the legal world. Children, for example, are legally barred from entering bars and casinos. In many states, Republicans are allowed to vote in Republican primaries while Democrats are not. Lawyers, hairdressers, accountants, and teachers need to be licensed to practice their professions, while dog-walkers, tutors, paralegals, and painters need not. Some of those who have committed crimes are sent to prison; others are not. People without shoes and shirts may be denied service. Public schools can divide athletes into varsity and junior varsity teams, singers into open and select choirs, and scholars into advanced placement or school credit courses. Drivers traveling in opposite directions are required to stay on opposite sides of the road. In examples that may hit closer to home for Carlson, country clubs are entitled to exclude non-members from their facilities, and those at different income levels are subjected to different tax responsibilities. These are all examples of government classifications — or segregations — that operate daily.

For more than a century, vaccination status has been one of those acceptable categories. In 1905, the Supreme Court ruled that U.S. states could legally mandate that their citizens get vaccinated in the watershed case of Jacobson v. Massachusetts. Schools, businesses and other entities have legally required vaccinations since that time, long before the advent of cable TV, the start of the COVID-19 pandemic, or even the fall of Jim Crow. For all of the political furor surrounding so-called “vaccine passports,” airlines have long required proof of vaccination against tropical diseases for certain forms of international travel.

The problem with racial segregation is not that classification is a bad thing in general — it’s that racial segregation is a particularly odious thing because race is an immutable characteristic. People are born with it. They can neither choose it nor change it. Vaccination status is not an immutable characteristic. A person is free to decide whether or not to become vaccinated. Receiving a vaccine is something you choose to do, not something you are.

Choices have consequences, some of which are imposed by law and others that are imposed by the free market or by science. Special privileges for those who have chosen to get vaccinated are a consequence of a choice.

Racially incendiary rhetoric is nothing new for Carlson. The Anti-Defamation League called upon Fox News to fire him earlier this year for parroting a white supremacist theory about a supposed plot to “replace” the current U.S. population with people of color. The anti-hate watchdog is one of many increasingly mainstream organizations accusing him of laundering extremist views to a mass audience.

Carlson’s latest pronouncement, deeply offensive to Black people and others who believe Brown v. Board was properly decided, also botches the law.