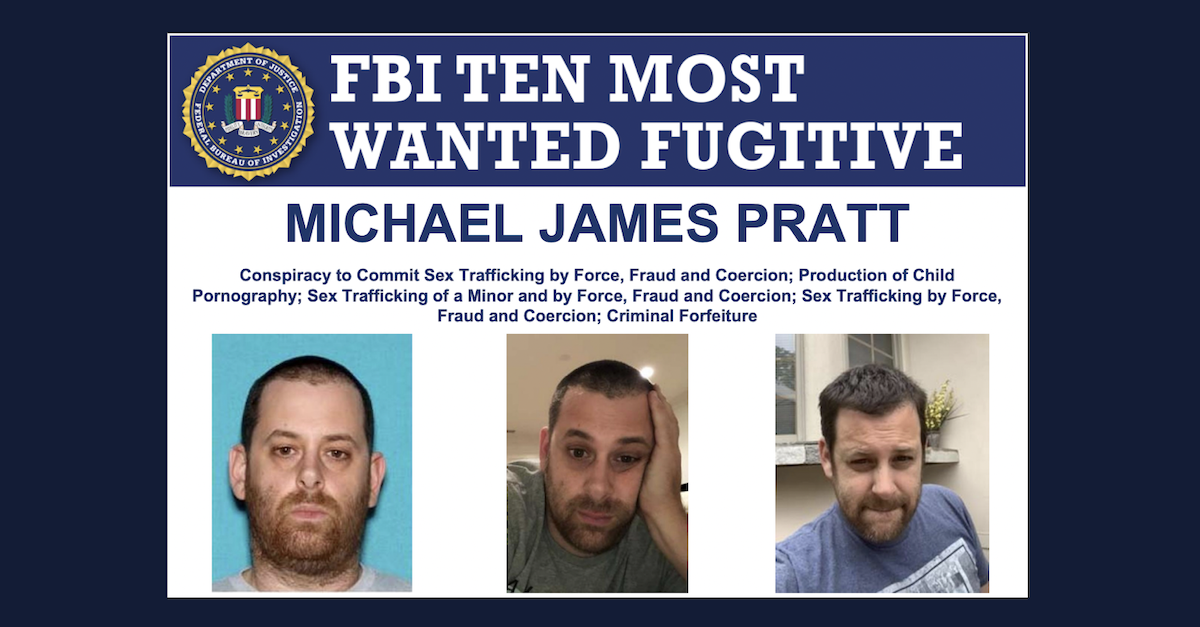 The FBI has added the fugitive founder of a pornographic website to its Top 10 Most Wanted list, seeking to bolster attention for a man whose cohorts were arrested three years ago.

New Zealand citizen Michael James Pratt, 39, is charged in U.S. District Court in San Diego with conspiracy and sex trafficking crimes in connection with a seven-year scheme that victimized women into filming sex videos that were posted online without their consent.

Prosecutors say he operated a pornography production company and related websites GirlsDoPorn and GirlsDoToys that generated “more than $17 million in revenue” by selling access to videos that were filmed under fraudulent circumstances. Women reported being sexually assaulted and not being allowed to leave during filming, which occurred mostly at hotels and rentals in the San Diego area.

Stacey Moy, special agent in charge of the FBI’s San Diego office, said locating Pratt “is a high priority for the FBI in order to stop him from victimizing anyone else.”

“Michael James Pratt preyed on young women and girls and allegedly coerced or forced them through threats and fraud to participate in pornographic videos,” Moy said in a press release. “He engages in dangerous and deceptive practices wherever he goes, and we will not waver until justice is served.”

Randy Grossman, U.S. Attorney for the Southern District of California, said Wednesday’s announcement “is yet another important step in our commitment to bring Michael Pratt back to San Diego to face these charges and to seek justice for the victims of these crimes.”

“This was a despicable crime that has devastated its victims,” Grossman said in the press release.

Four of Pratt’s co-defendants have pleaded guilty, with Matthew Isaac Wolfe facing 11 to 14 years in prison after admitting in July to filming about 100 videos over seven years while managing the websites’ finances and supporting businesses.

Prosecutors have promised to recommend no more than 12.5 years in prison for Wolfe, but they made a similar recommendation in June 2021 for co-defendant Ruben Andre Garcia, and the judge instead imposed 20 years.

Wolfe’s sentencing is scheduled for Oct. 31. Two others, cameraman Theodore Wilfred Gyi and bookkeeper Valorie Moser, are to be sentenced Oct. 7 after pleading guilty last year to conspiracy to commit sex trafficking by force, fraud and coercion.

Both Pratt and Wolfe were defendants in a fraud lawsuit that went to trial before San Diego County Superior Court judge in 2019, resulting in a $12.7 million verdict.

The FBI has long offered a $50,000 reward for information that leads to Pratt’s arrest. His placement on the Most Wanted List increased that reward to $100,000, which is the minimum offered for Top 10 fugitives.

The list was created in 1950 “to publicize particularly dangerous fugitives who might not otherwise merit nationwide attention,” according to the FBI. As of Wednesday, 529 fugitives have appeared on the list, with 492 located, 163 of whom were found “as a direct result of citizen cooperation.” Thirteen have been killed during capture, and 25 have surrendered, the FBI said.

Read the 2019 criminal complaint against Pratt below: