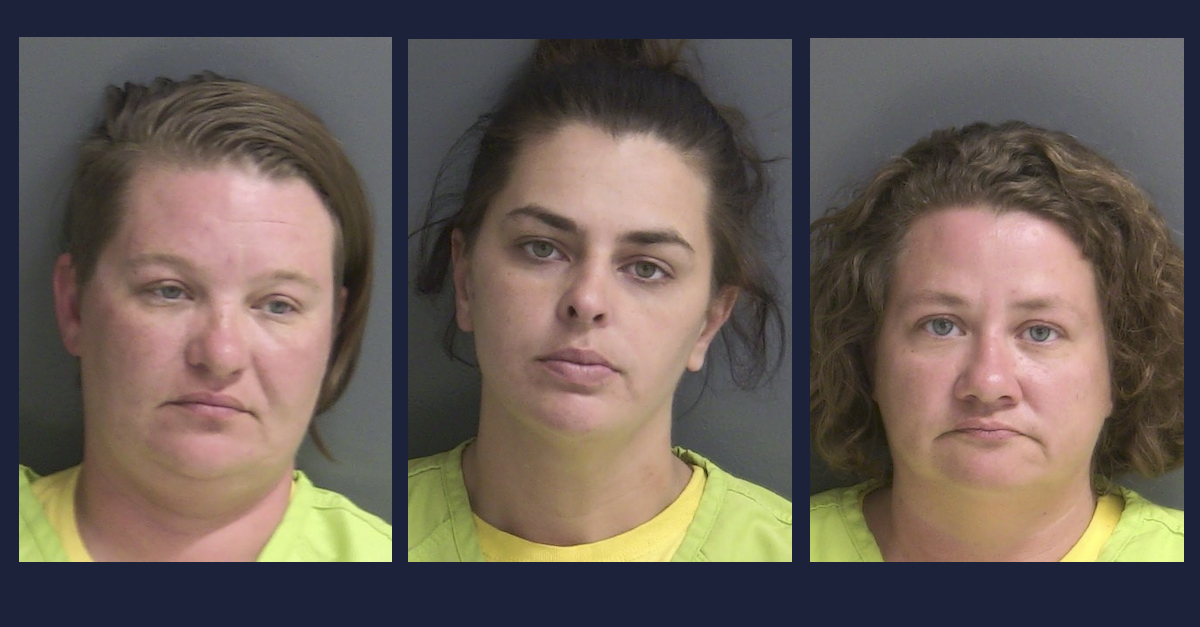 Three woman in New Mexico have been arrested and charged in connection with an extreme case of alleged child abuse that spans 50 separate criminal charges between the trio.

Jayme Kushman, 37, Jamie Sena, 29, and Lora Melancon, 41, were recently taken into custody throughout a series of arrests that began late last month and carried on into the present week.

Melancon, reportedly the last of the three to be arrested, stands accused of three counts of child abuse and one conspiracy charge.

According to Albuquerque, New Mexico-based NBC affiliate KOB, Sena and Melancon were both formerly romantically involved with Kushman. During each relationship, authorities allege in court documents obtained by the TV station, the women would be caring for between two and six children. Some of those children were their own offspring; others were passing through and in need of shelter.

Law enforcement claims that many of the children did not attend school while in the care of the three women. But it wasn’t simply a matter of over-exerted resources or neglect, those documents allege.

Kushman is believed to have beaten some of the older children with a paddle that would occasionally leave bruises all over their bodies. She allegedly punched the children in the face as well. Those documents also allege multiple defendants often withheld food from the children.

Two of the children are believed to have been chained to their beds overnight or longer – going on days at a time. Other forms of punishment allegedly exacted upon the children by the defendants included locking them in dog cages in extremely cold weather and forcing them to stand in the corner for days on end.

Prosecutors reportedly cited disturbing pieces of multimedia evidence in assessing the charges against the three.

According to investigators, there are home videos with audible screams filtering through – the alleged sounds of the children being beaten. In one video, one investigator allegedly observed, a boy’s face was “being smothered in his own vomit.”

In another instance, law enforcement claims, there are pictures showing two children “eating spaghetti from inside a filthy bathtub with their bare hands and naked.”

The alleged cavalcade of abuse had been going on for years at a residence in Texico, New Mexico, investigators say, despite the efforts of witnesses to report the situation to child welfare authorities.

In those documents obtained by KOB, there are allegations that the defendants were consistently tipped off to various inspections made by the New Mexico Children, Youth and Families Department. Those presumed tips, witnesses say, likely allowed the women time to cover their tracks. Investigators cited one member of the tiny town’s local police force who admitted that they had never seen any such evidence of abuse either.

The children at issue are now all reportedly safe.