‘This Is What a Revolution Motherf***ing Looks Like’: Texas Man Who Stormed Capitol on Jan. 6 Receives Long Probation Term, No Jail 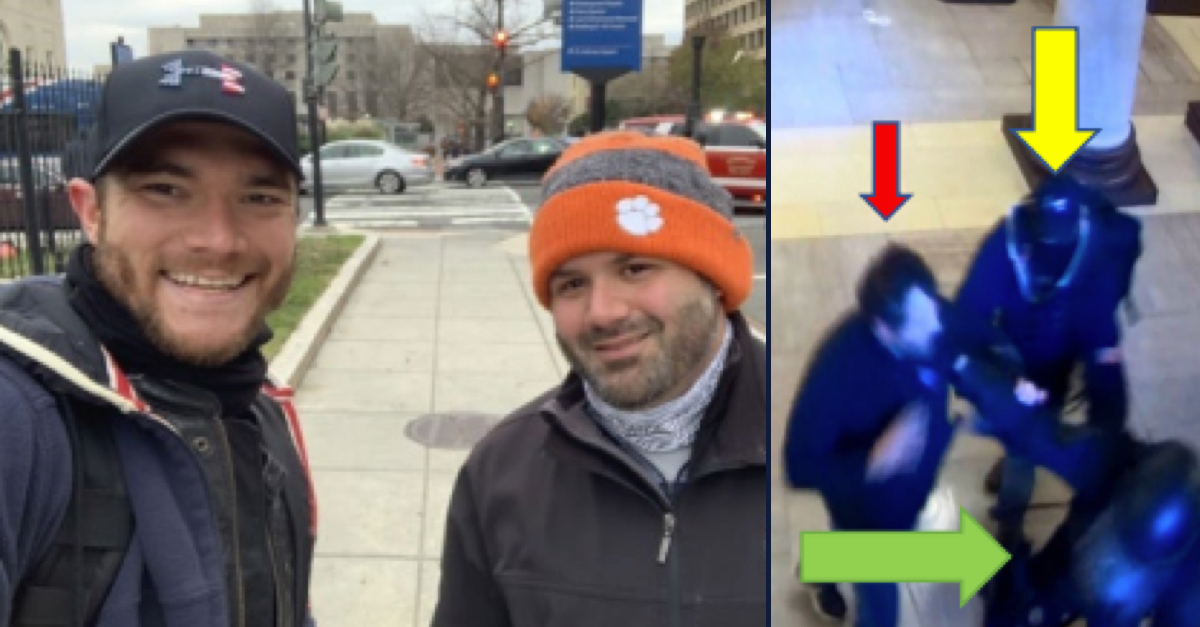 Left: Darrell Youngers takes a selfie of himself and co-defendant George Tenney (Youngers in cap, Tenney in orange knit hat). Right: Youngers, indicated by a yellow arrow, and Tenney, indicated by a red arrow, face off against a Capitol Police officer inside the U.S. Capitol on Jan. 6. (Images via FBI court filing.)

A Texas man who stormed the U.S. Capitol alongside a convicted rioter known as the “PowerHouse Patriot” will not spend any time behind bars.

Darrell Alan Youngers, 32, received a sentence of three years of probation during a hearing before Senior U.S. District Judge Thomas Hogan on Thursday. Youngers had pleaded guilty in March to one count of parading, demonstrating, or picketing in a Capitol building, a misdemeanor punishable by up to six months behind bars.

According to his plea agreement, Youngers, a Marine Corps veteran, traveled from Texas to Washington, D.C. to attend a rally in support of then-President Donald Trump and his unsupported claims of voter fraud in the 2020 presidential election, which he lost to Joe Biden. While at the rally, Youngers met the man who would ultimately become his co-defendant, George Amos Tenney III, who ran a politically-charged Facebook page called “The PowerHouse Patriot.”

Together, Youngers and Tenney made their way to the Capitol building, joining the crowd of Trump supporters and eventually entering through the Senate Wing Doors at approximately 2:19 p.m., six minutes after the initial breach.

According to prosecutors, Youngers appeared to try to either intervene or interfere after Tenney had “locked arms” with a Capitol Police officer identified in documents only as Officer B.A. At one point, when the officer tried to defend the doors that Tenney had helped force open, Younger helped untangle the cord to B.A.’s radio that had wrapped around part of a bench.

Officer B.A. was subsequently grabbed from behind by other rioters and thrown to the ground.

Youngers had narrated much of his journey that day. Prosecutors argued that by his own words, Youngers knew he wasn’t supposed to be there.

“[P]eople have just stormed the front of the Capitol building, through tear gas” Youngers is heard saying on a video he made. “[P]eople aren’t supposed to be up there, but they’re there.”

“Two stories. Two floors. Multiple doors. The Capitol Building’s been breached,” he is heard saying while inside the Capitol Rotunda.

Youngers and Tenney spent less than 15 minutes inside the building. Later that day, Youngers livestreamed a video to Facebook in which he said that “protestors were inside the Capitol Building,” but they were “not being violent,” even though they had “forced their way in.”

Youngers admitted that he said on the video that they were “not being aggressive with the cops,” but had seen some “small skirmishes … little fights between the protestors and security” but “no shootouts.”

Tenney pleaded guilty in June to civil disorder and obstruction of an official proceeding, both felonies. He will be sentenced in October.

Unlike some Capitol rioters who have used their sentencing hearing to express remorse, Youngers was not particularly contrite when he spoke to Hogan on Thursday. Despite having previously acknowledged that he had traveled from Texas to Washington in order to attend the pro-Trump rally, Youngers said on Thursday that his trip to D.C. was essentially a coincidence.

“Jan. 6 happened to be occurring during a period in which I was on a road trip,” Youngers said.

“The trip was never about going to Washington D.C. in the first place,” he later said. “It just happened to be happening a few hours away from my trip. I wanted to see what it was all about, essentially.”

Youngers said that his main concern in getting into the Capitol building as the riot unfolded was to lend a helping hand.

“I wanted to see for myself, because this is insane, and maybe there’s a potential I could quell something or help someone that might be injured, whether it be a cop or a protestor,” the defendant told Hogan. “I had no violent intentions toward the cop or anyone in there, I think that’s evident from the video.”

Youngers said that he had not joined Tenney in trying to force open the doors to the Rotunda.

“If I wanted to open that door it would have been opened,” Youngers insisted. “But I recognized it was police over there doing their job, and I stepped away.”

At Thursday’s hearing, Hogan, a Ronald Reagan appointee, sounded rueful that he could not issue a “split sentence” of jail time and probation to the defendant, noting that he was obligated to stick to his prior finding that such sentences for this type of misdemeanor were prohibited under federal sentencing laws.

“I have found that split sentences would be appropriate, but not allowed under the law,” the judge said. “I’ve really limited myself to that application of the law.”

While Hogan did not comment directly on the fact that Youngers did not make any apology during Thursday’s hearing, the judge did share an observation about the Jan. 6 defendants generally.

“I’ve seen most everyone say they’re sorry,” the judge said. “They’re not sorry for the 140 officers injured, the families of those who committed suicide … [they are] regretful they got caught.”

Hogan did tell Youngers that he believed the defendant did have “some acknowledgment” of his wrongdoing, and he believed Youngers wouldn’t participate in something similar in the future.

Hogan did, however, push back on Youngers’ assertion that he didn’t participate in any violence while at the Capitol riot.

“I find that Mr. Youngers was engaged in, and he did observe, violence,” the judge said. “He did make remarks [about] this ‘revolution,’ which is simply overthrowing the government of the United States. He did partake in that just by his presence, being there, supporting the riot, whether he came here to do that or not.”

Hogan decided against sending Youngers to prison, instead opting to impose a long term of probation that he said will “carry over until the next general election.”

“I’m giving you a break by not putting you in jail, because I think you did try to help the police officer,” Hogan said, adding: “Your background and history suggests that you’re not going to get in trouble again.”

Hogan also ordered Youngers to pay a fine of $1,000 in addition to the $500 he had previously agreed to pay in restitution toward the estimated $2.7 million in damage to the Capitol.