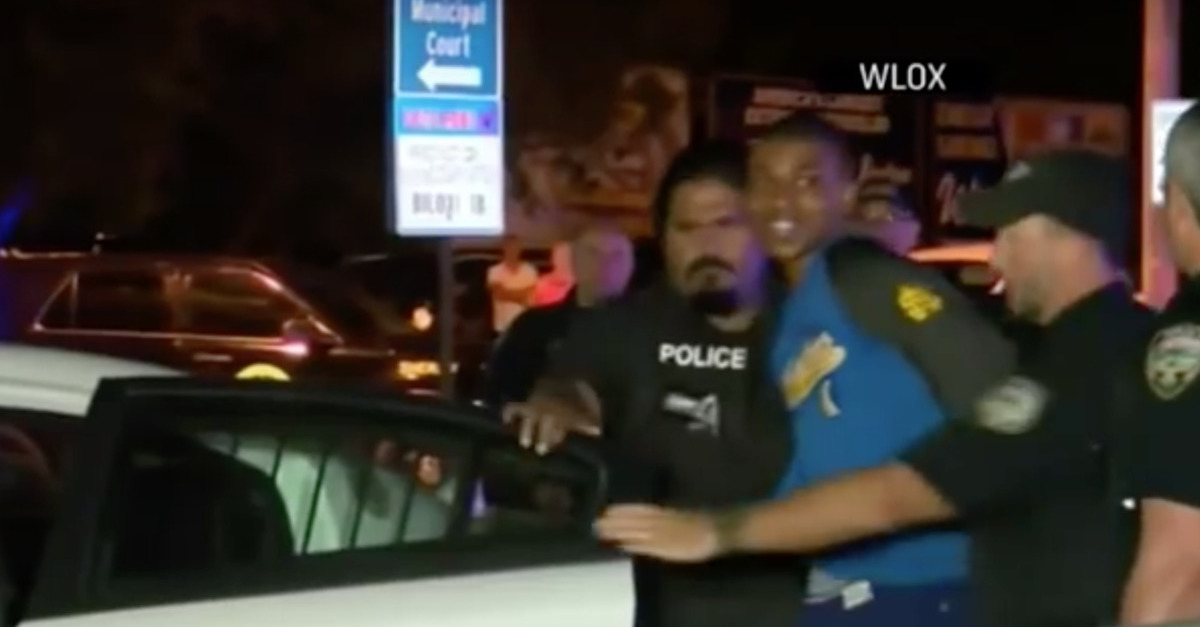 After a manhunt in Mississippi came to an end on Monday, the prime suspect in the murder of a police officer appeared to have smiled for the cameras before he was escorted into a police station.

We all pray for our brothers in blue this morning at Biloxi P.D. One of their finest has been lost. pic.twitter.com/QdaXbipT3u

Commissioner Fisher & I met with Biloxi Police Chief. We are assisting Harrison Co. Sherrif & Gulfport P.D. with investigation. Suspect remains at large. This was a senseless murder of a veteran police officer. We will find the coward who fired the shots & take him into custody. https://t.co/d4nqizsk2t

Officer Robert McKeithen of the Biloxi Police Dept. was killed in a deliberate, violent attack outside his station house last night. He was a 24-year veteran cop. We send our prayers to his family, and to his colleagues who will bring to justice those responsible. #NeverForget pic.twitter.com/2Pc5WC3AJv

The coward has been captured. Good work Wiggins P.D. and all officers involved. https://t.co/69BMmp44Aj

At this point, it is unclear whether McKeithen’s murder was a random act of violence or whether the 58-year-old officer was specifically targeted. Authorities have reportedly reviewed surveillance footage that allegedly shows the gunman nonchalantly walking around outside of McKeithen’s station house, then approaching McKeithen, and finally shooting him multiple times.

Following his capture, Atkinson appeared to be maintaining a relaxed demeanor; video footage appeared to show him smiling as he passed dozens of uniformed officers and bystanders on his way into the police station.

After the suspect’s apprehension, Biloxi Police Chief John Miller told reporters, “We feel vindicated. He’s been treated properly and fairly. And now we will grieve for the family.” When asked how he felt about Atkinson’s expression as he was taken into custody, Miller said he was “not bothered by his smile.”

Atkinson has been known to authorities since at least Feb. 2018, when he allegedly threatened to perpetrate a school shooting.