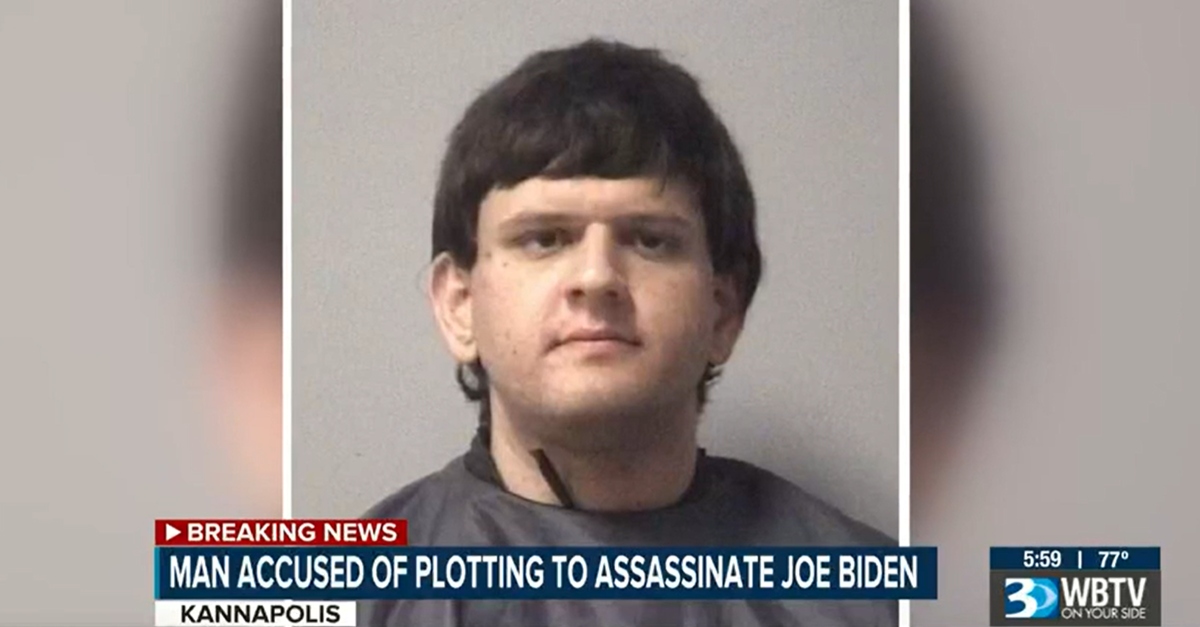 A defendant in a federal child pornography case is going to stay behind bars. The judge’s reasoning? Authorities said the defendant plotted to assassinate Democratic presidential candidate Joe Biden. That was not even the most grotesque allegation against defendant Alexander Hillel Treisman, 19.

For example, investigators described Treisman multiple times discuss committing a mass shooting, in one instance allegedly saying was “going to do a columbine for a while […].” Also, video allegedly from the defendant’s phone purportedly showed him driving by the Mandalay Bay Casino in Las Vegas, Nevada, where a gunman killed 58 people and injured about 500 more on October 1, 2017. It was the deadliest mass shooting in modern American history. Treisman allegedly voiced anything but horror.

“There it is,” he said, according to a court filing. “That’s it. That’s the one, that’s where they did it. Allah Akbar! Ah hah, nice.”

According to the authorities, the case started when a bank in Kannapolis, North Carolina reported an abandoned white Ford in their parking lot. Cops checked it out, and they said that through the windows, they saw weaponry including an AR-15 style rifle, a box for a .380 handgun, a cannister of the explosive Tannerite, and a box of 5.56 caliber ammo. In their search, police also reported findings including drawings of swastikas, books, pictures of planes crashing into buildings, and $509,000 thought to be Treisman’s inheritance.

The defendant personally landed on their radar after he asked the bank about his towed van, according to the filing. All told, search warrants on his cellphone and 15 other electronic devices allegedly turned up a total of 1,248 videos and 6,721 featuring child pornography, “in addition to 637 video and images of child pornography containing sadism and/or masochism content.”

Investigators say an October 15, 2019 note on his cellphone described a plot to commit a mass shooting at a mall food court either on Christmas or Black Friday.

Treisman allegedly had also downloaded footage of the Christchurch, New Zealand mosque shooting on March 21, 2020, and performed internet searches in connection to that.

An April 8, 2020 internet post attributed to the defendant stated he was “going to do a columbine for a while, [but] I think it would better to put it towards something more memorable.” Seven days later, he allegedly posted a meme featuring the caption “should I kill joe biden?” He allegedly looked up Biden’s home address, purchasing an AR-15 in New Hampshire, going to a Wendy’s within four miles of Biden’s home, and writing a checklist ending with “execute.”

Treisman allegedly wrote on Reddit that he had to “save bernie,” several days after Sen. Bernie Sanders (I-Vermont) suspended his campaign for president, according to The Washington Post.

The defendant allegedly had an image on a hard drive of a Polish passport edited to feature his face. He also had two fake driver’s licenses with the alias Alexander S. Theiss, authorities said.

An attorney of record did not immediately respond to a Law&Crime request for comment. In the filing, a defense lawyer was said to have mentioned that Treisman was diagnosed with Asperger syndrome at age 12, but the defendant allegedly denied in a May 29, 2020 interview with law enforcement that he had mental health conditions.

“The Court notes that Defendant has no prior criminal history,” Judge Joe L. Webster wrote. “However, having considered the information presented, the Court concludes that the record establishes by clear and convincing evidence that no combination of available release conditions would reasonably assure the safety of the community, and that a preponderance of evidence establishes that no conditions would ensure Defendant’s presence in court.”