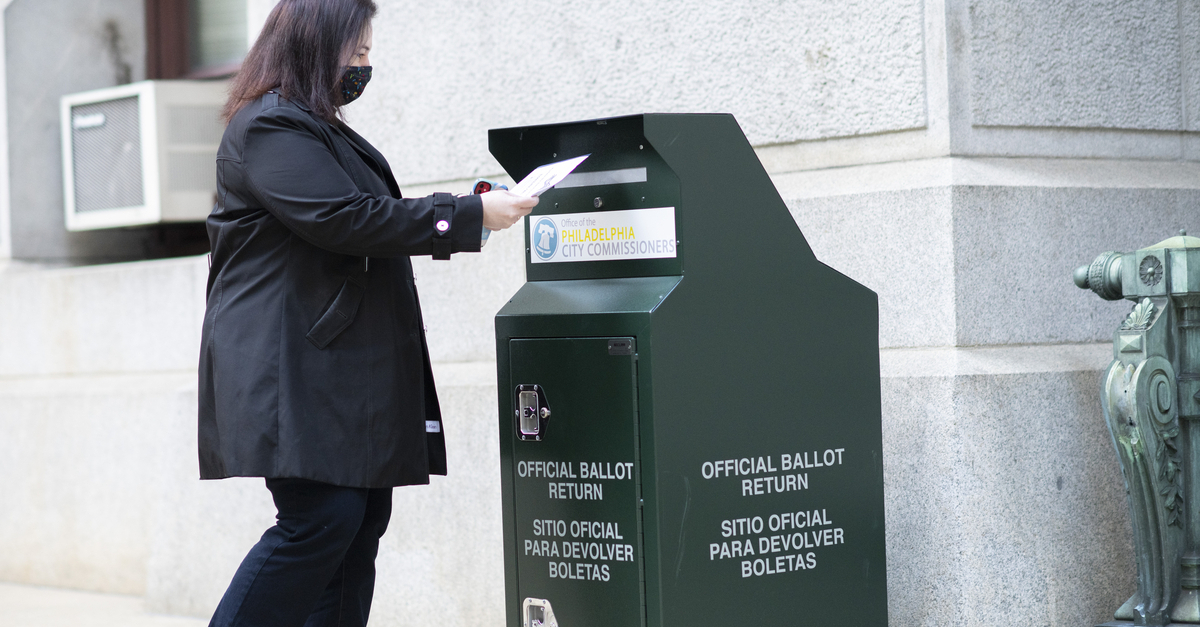 A voter casts her early voting ballot at drop box outside of City Hall on October 17, 2020 in Philadelphia, Pennsylvania.

Team Trump has upped its game in the battle-ground state of Pennsylvania. The campaign actually sent a letter to Pennsylvania elections officials admitting that it has been secretly videotaping voters as they deposit ballots into drop boxes. Many people suggested that the campaign confessed to illegally intimidating voters, but that is incorrect.

In a letter, Trump campaign lawyer Linda Kerns detailed that three voters were caught on surveillance by a campaign staffer submitting multiple mail-in ballots. According to Kerns’s analysis, the video was evidence of “blatant violations” of state election law; she even threatened that the campaign would bring a lawsuit unless Philadelphia, “commits to remedy this problem immediately.”

The Trump campaign has been suing—and losing—a lot when it comes to mail-in voting in the critical state of Pennsylvania. But what, exactly, was the violation Kerns suggested? According to her take on voting guidelines, only a voter can deliver their own ballot.

Kerns isn’t quite correct on that analysis. Under Pennsylvania law, voters may deliver their own ballots, as well as the ballots of a voter for whom they are providing “assistance.” Pennsylvania explains:

If you need help voting due to a disability, you may bring a person of your choice to assist you in the voting process. There are a few restrictions on who to bring, including that you may not choose a person who is:

A Judge of Elections

Benjamin H. Field, a deputy city solicitor and lawyer for the city Board of Elections, told Kerns in a response letter that “Third party delivery is permitted in certain circumstances.” Field continued to say that the Board “cannot agree with” Kerns’ conclusion as to fraud, and that it will not “assume that an individual is violating the Election Code when that person can act as an agent for a voter who required assistance.”

Although Kerns’s allegations don’t appear to amount to much, many are now arguing that the videotaping of voters amounts to illegal voter intimidation.

The revelation earned a warning from Pennsylvania’s attorney general that suggested the tactic could amount to illegal voter intimidation.

The Trump campaign argues that video of people dropping off multiple ballots in Philadelphia is reason to remove “unmanned drop boxes.” The state attorney general’s office warned that videotaping voters at drop boxes could be illegal intimidation. https://t.co/qn94tp1vpq

The New York Times reported that Pennsylvania Attorney General Josh Shapiro (D) slammed the Trump campaign for its actions, warning that recording a voter “could” be illegal intimidation, depending on the circumstances.

“Pennsylvania law permits poll watchers to carry out very discrete and specific duties — videotaping voters at drop boxes is not one of them,” Shapiro said. “Our entire system of voting is built on your ballot being private and your choice to vote being a personal one. Depending on the circumstance, the act of photographing or recording a voter casting a ballot could be voter intimidation — which is illegal.”

There’s a federal statute that prohibits voter initidation. Here’s what it says:

“It is illegal for any person or corporation to directly or indirectly practice intimidation or coercion through the use of force, violence, restraint, or infliction or threatened infliction of injury, damage, harm, or loss, in order to induce or compel a person to vote or refrain from voting for a particular candidate or on a particular political issue.

It is illegal for a person or corporation to use abduction, duress, coercion, or any other forcible or fraudulent means to impede, prevent or otherwise interfere with a person’s right to vote.”

As we have discussed since the last presidential election, fighting imaginary allegations of voter fraud with very real attempts at voter intimidation has been in the Trump playbook for a while.

The problem, however, with labeling surveillance of Philadelphia voters “intimidation” is that the voters were unaware of the taping. And if someone is unaware of your actions, it’s kind of difficult to say those actions would cause them to change their vote. Prohibitions against voter intimidation center on direct actions — inflicting force or violence, or using threats; it is clear that the applicable statutes contemplate some kind of direct action taken against a potential voter. Secret surveillance likely would not be enough.

In a more general sense, it’s likely still not illegal for the campaign to have recorded voters without their consent. In outdoor public spaces, individuals have no expectation of privacy, and their images can be captured on video even without their consent. The rules are different when it comes to surreptitiously recording a conversation, but there’s nothing to indicate that there was an audio track involved here.

Law&Crime spoke with Tulane University law professor and election law expert Ross Garber. He explained that, “Unless there’s a specific prohibition, I don’t think the video recording of voters at drop boxes in public places would amount to voter intimidation.”

“Particularly here, it doesn’t seem the purpose was to dissuade people from casting lawful ballots, but to record instances of possible violations of election law,” Garber said.

That brings us to the conclusion that secretly videotaping voters as they submit ballots is weird and aggressive, but isn’t technically voter intimidation.