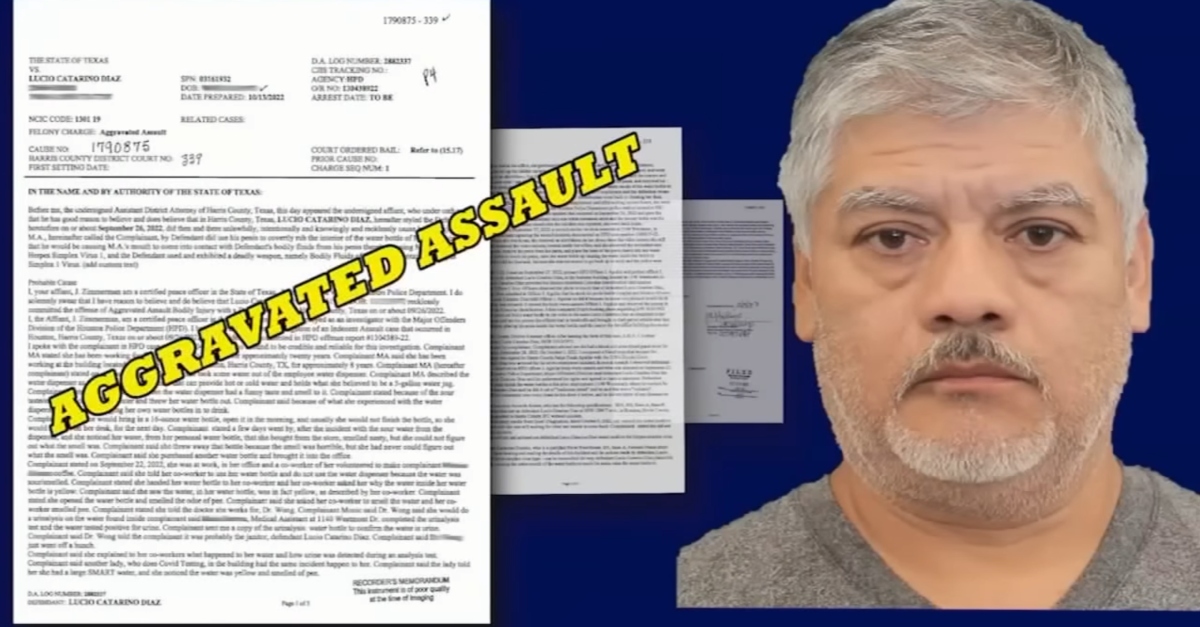 Plaintiffs filed a lawsuit after a janitor allegedly peed in a Texas woman’s bottle. As previously reported, police said the woman (identified in documents as M.A.) set up a hidden camera in her office and discovered that Lucio Catarino Diaz, 50, had repeatedly taken out his penis and put it inside her water bottler.

Now her attorney announced a complaint on behalf of four people, including her, according to KHOU on Thursday. Lawyer Kim Spurlock said there could be more plaintiffs in the lawsuit as well as more charges against Diaz.

But the complaint isn’t against Diaz. It’s against companies connected to running the building. For example, M.A. reached out to a property manager for co-defendant Aurum Property Partners, according to the complaint. Plaintiffs say that M.A. provided incriminating hidden camera video against Diaz. M.A. said she would tell all of the building tenants about what happened, but the property manager asked her not to do that, and that the company would handle it. The complaint stated that the company spent six days to warn tenants about the potential contamination of their water, however. Plaintiffs say Diaz also was not put under a proper background check.

As police have said, M.A., who worked in a doctor’s office in an medical office building at 1140 Westmont Drive in Houston, set up the hidden camera after a series of disturbing incidents. First, she said that the water on the standing water dispenser was tasting and smelling strange. When she moved onto bringing her own water bottles to work, the problem continued. On Sept. 22, police said, a co-worker noticed the water in the bottle was yellow. The doctor that M.A. worked for had it tested, officers said. It allegedly returned positive for urine. Citing M.A., police said another woman in the building discussed a similar experience: the water in her Smartwater bottle was yellow and smelled of urine.

The three other plaintiffs are named by the initials N.C., N.N., and D.C..

The top executive for the building owner previously said management had cooperated with police.

“Our management company immediately cooperated with the police department in this matter as soon as we were made aware of this potential issue by our tenant,” said Terry Quinn, CEO of building owner Altera Fund Advisors in a statement obtained by KTRK in a Tuesday report. “They were advised by the police to not alert or approach the alleged perpetrator so that he could be arrested. He was arrested when he returned to the building.”

Defendants in the lawsuit did not immediately respond to a Law&Crime request for comment.

Charges against Diaz are aggravated assault with a deadly weapon and indecent assault.