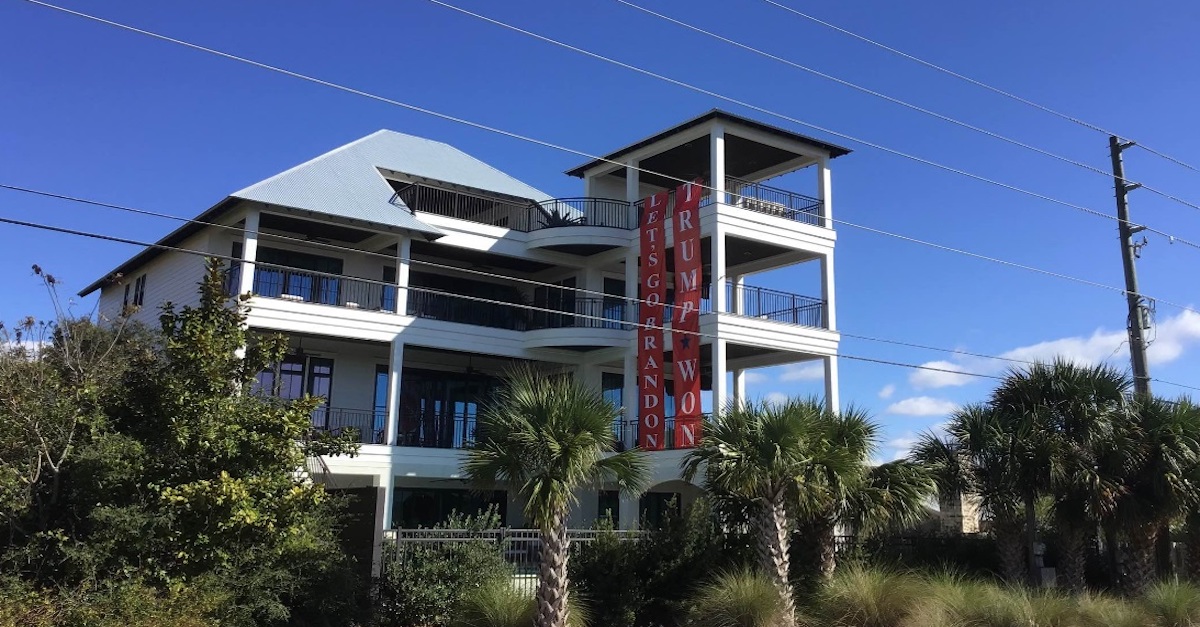 A Florida homeowner who is already facing a daily $50 fine for hanging a massive pro-Donald Trump banner from his home along a beachside highway may face an even stiffer penalty after adding an anti-Joe Biden sign to the display.

The signs hanging from Marvin Peavy‘s home in Seagrove Beach make his support for the former president clear.

“Trump Won” says one sign; the other says “Let’s Go Brandon,” a reference to the crass, coded Biden insult that has become a rallying cry for conservatives. It is a euphemism for “F— Joe Biden.”

Both signs are a clear violation of a longstanding local ordinance.

“This rule has been on the books for a while,” code compliance director Tony Cornman told Law&Crime. “It has nothing to do with what’s written on the banner. It could say anything and still be a violation. It’s not the content, it’s just the banner that’s a violation.”

Cornman said that the code enforcement department does not initiate enforcement actions, but only responds to complaints.

“What we do is complaint-driven,” he told Law&Crime.”We do not go out and proactively look for violations, so for us to investigate something like this we had to receive a complaint. I think we got multiple complaints on it, so we had to go out and investigate.”

The code reads as follows, with emphasis added to the provision Peavy’s signs have been deemed to violate:

B. Prohibited signs. In addition to the signs prohibited in Section 6.03.00, the following signs
shall be prohibited in the Route 30-A Scenic Corridor:
1. Permanent off-premise outdoor advertising signs (an off-premise sign is any sign
located on property other than that to which the sign relates);
2. Pole signs;
3. Water towers as commercial advertising;
4. Wall murals as commercial advertising;
5. Off-premise signs;
6. Temporary mobile or portable signs;
7. Interior lit single panel plastic or Lexan face;
8. Streamers, feather flags, pennants, ribbons, spinners and other similar devices;
9. Flashing signs;
10. Signs containing reflective elements that sparkle or twinkle in the sunlight;
11. Roof signs;
12. Signs containing moving parts.

Peavy had hung the “Trump Won” banner—a reference to the widely-debunked conspiracy theory about the 2020 presidential election—in July. By September, code enforcement officials had investigated, and warned Peavy that he’d be in violation of the code if he didn’t take it down.

At an Oct. 20 hearing, code enforcement officer Charles Cronin told special magistrate Hayward Dykes Jr. that an attorney for Peavy had called him and told him he would remove the sign. Peavy was not at that hearing.

Just two days later, however, Peavy had committed to not only keeping the sign up, but adding to it, according to a report by the Northwest Florida Daily News.

“Fifty dollars a day ain’t a damn thing to me,” Peavy said at the time. “I’m not going to take it down.”

Peavy told the Daily News that he had already received calls from people offering to pay the fines.

Cornman said that his office has received both criticism and praise for enforcing the code.

The next hearing on Peavy’s sign is set for Nov. 17. Cornman said that additional fees may be assessed at that time, if Peavy hasn’t complied with the code.

Peavy had previously hung a pro-Trump sign at his house during the 2020 presidential election. That sign fell under an exception that allowed political signs to be temporarily displayed, but they must be removed within 15 days following the campaign.

Peavy kept the sign up for two months after the election, according to the Daily News, but eventually took it down after Biden’s inauguration in January.