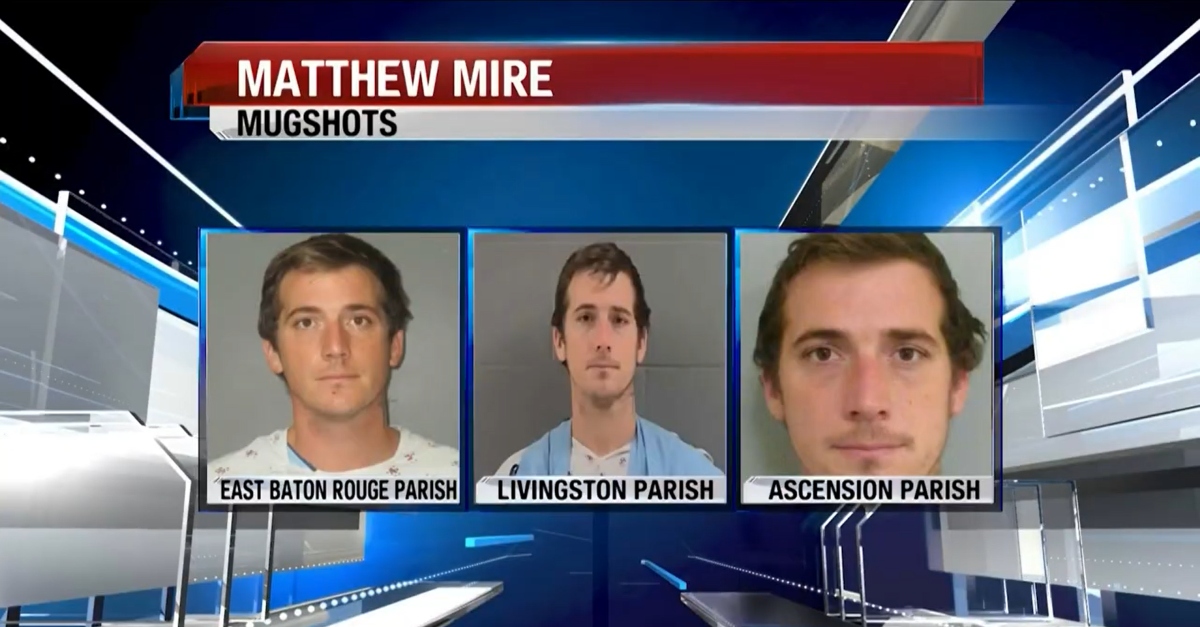 Through an attorney, a Louisiana man pleaded not guilty in a shooting spree in which he allegedly killed a woman and a state trooper. An attorney for defendant Matthew Mire, 31, attempted to waive the reading of the other charges besides two counts of murder, but Judge Tess Stromberg refused, according to The New Orleans Advocate.

Mire is the Louisiana man who is accused of being behind a multi-parish shooting spree on Oct. 9. Alleged victims included Louisiana State Police Master Trooper Adam Gaubert. Authorities say that Mire ambushed Gaubert, who was in his patrol car writing reports in Prairieville. The killing of the trooper occurred after Mire allegedly shot his neighbors in the village of French Settlement.

After shooting Gaubert, the defendant allegedly showed up at a home less than a mile away and shot two people. One of them, Pamela Adair, 37, died, cops said.

Mire ended up allegedly shooting another trooper hours later when that officer tried to perform a traffic stop.

Besides murder, other charges include attempted first-degree murder of a police officer, illegal possession of stolen firearms, and obstruction of justice.

In an Oct. 11 Facebook post, state cops said they used Gaubert’s handcuffs to restrain Mire after he was released from the hospital.

The trooper was a 19-year veteran of the department, they said.

“Trooper Gaubert embodied everything we stand for; honor, duty, selfless service, and courage,” state police said on Oct. 10. “In the days ahead, we will mourn his tragic death and honor his service to our department and the citizens of Louisiana. At this time, we ask that you please respect Trooper Gaubert’s family’s privacy. Thank you for your patience and understanding while we work to maintain the safety of our citizens and fully investigate all aspects of this incident. Please keep our Troopers and Trooper Gaubert’s family in your prayers.”