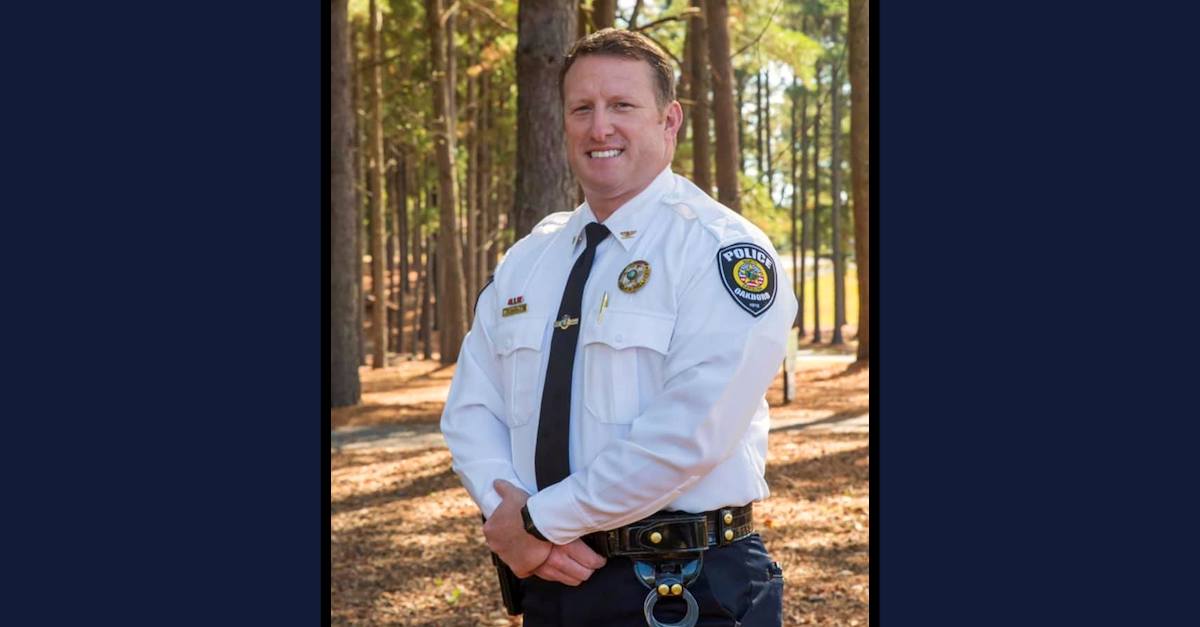 A North Carolina police chief has been suspended for reportedly telling officers that they could obtain fake COVID vaccination cards at a purported self-vaccination “clinic” after injecting themselves in bathrooms or throwing supposed vaccine doses into the garbage.

According to a letter obtained by a number of area journalists, Chief TJ Smith of the Oakboro, N.C. Police Department was determined by Town Administrator Doug Burgess to have violated both town personnel policy and a police department policy manual. Smith engaged in “[d]etrimental personal conduct” which included “notifying law enforcement officers to attend a ‘clinic’ where they would be able to obtain proof of COVID 19 vaccination cards without being vaccinated,” the letter alleges.

As to town policy, the letter says the chief’s conduct constituted “[f]raud” and involved “acts that endanger the property of others.” The letter also suggested that the chief was “[s]erving a conflicting interest.”

As to the police manual, the letter alleges violations of standards for “General Conduct,” “Competency,” and says the chief did not display “Obedience to Laws and Rules and Regulations.”

“Based on my review of all information available and provided that relate to your failures in personnel conduct, I am placing you on unpaid leave for two calendar weeks, beginning December 21, 2021,” the letter from Burgess to Smith reads. “You are placed on probation for six calendar months, beginning December 21, 2021. Further violations will lead to discipline up to and including dismissal.”

The letter notes that Smith has a right to appeal the action.

According to Charlotte, N.C. ABC affiliate WSOC-TV, the municipal government hired a private investigation firm to figure out what happened.

“The investigation alleged that Smith told officers and troopers there was a vaccination clinic where they would be given a syringe to go in a bathroom to self-inject or dispose of the vaccine,” WSOC reported, citing the investigation. “Smith allegedly said there was an arrangement with a pharmacist and that either way, the officers would receive a vaccination card.”

Smith told the investigators that “[h]e did not view anything wrong with the procedure as he was unfamiliar at the time with vaccine rules,” WSOC said.

According to the TV station’s synopsis of the investigation, Smith only learned “after doing research . . . that the self-injection procedure was against the rules.”

Smith responded with a lengthy missive obtained by Charlotte, N.C. CBS affiliate WBTV. In it, he says he doesn’t “know much about the vaccine process” but says he is personally vaccinated against the novel coronavirus. He admits that he “shared misinformation” he heard from a “friend” but didn’t do so “from a place of malice.” The chief’s full statement, as reported by WBTV, is below.

Many have asked me for details regarding my involvement in recent allegations. To make a long story short, in retrospect, I made a mistake. A friend called me with some information about a mobile vaccination clinic. It was a busy morning like every other busy morning. After I got off the phone with that friend, I called two other officers (not in my department) and passed on information about what was described as a “self-vaccination” clinic. I got one phone call, hung up and made two others. I didn’t sit back and digest the information, ruminate on it, or otherwise give it much thought. I just passed it on.

Having the benefit of hindsight now, it is obvious the entire process sounds questionable. I didn’t post it on social media, and I didn’t really sit back and think hard on it at that moment. It was just one person sharing the word with another.

I’m not a doctor and not in the medical field. I don’t know much about the vaccine process or what’s involved. That’s what these clinics and such are for. Being in the military, I have taken many vaccinations without ever knowing what was in them or how they worked. I received my own Covid vaccines in the spring of this year from the VA hospital in Salisbury. I just try to help people where I can, and I passed on something that, in hindsight, I shouldn’t have.

I’m owning that. It was a mistake, and I shared misinformation. That’s true. I wanted to say something about this before now, but with everything going on, it was best that I wait for the investigative process to conclude.

I shared something that wasn’t true. I didn’t profit from it. I couldn’t possibly profit from it, and I didn’t do it from a place of malice. I care deeply about others, and I sincerely appreciate that I have a job that allows me to serve them and to see things improve in my community. We have the greatest people anywhere right here in Oakboro, and I hope they know my heart well enough to know that this came from a place of caring, that I realize I made a mistake now, and that they will allow me to continue serving in the best way I know how.

Allison Latos, a WSOC anchor, asked state officials whether a COVID card mill actually existed or whether the entire thing was made up. The North Carolina Board of Pharmacy promised to “assign this out for investigation,” WSOC added.

The disciplinary letter is here: