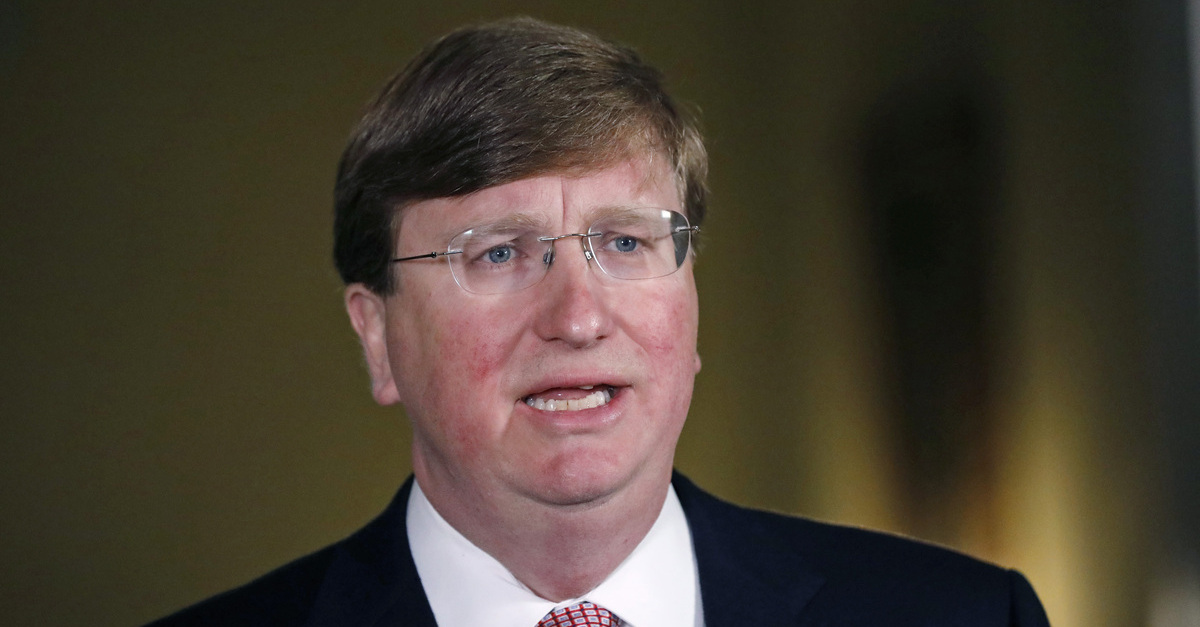 The GOP governor defended the new restrictions as a direct result of President Joe Biden‘s Jan. 20 executive order which aims to combat discrimination based on gender identity and sexual orientation.

That order, signed on the 46th president’s first day in office, explicitly notes that children should not be left to worry whether they will be denied access to “school sports.” Biden also directed all agencies of the federal government to fully comply with Title VII of the Civil Rights Act of 1964 and “to fully implement statutes that prohibit sex discrimination” in accordance with the broad principles of equity and pluralism contained in the order’s statement of purpose.

“But for the fact that President Biden as one of his first initiatives sat down and signed an executive order — which, in my opinion, encourages transgenderism amongst our young people — but for that fact, we wouldn’t be here today,” Reeves said during a signing ceremony flanked by anti-LGBTQ legislators who sponsored the bill.

The text of the bill elaborates:

Interscholastic or intramural athletic teams or sports that are sponsored by a public primary or secondary school or any school that is a member of the Mississippi High School Activities Association or public institution of higher education or any higher education institution that is a member of the NCAA, NAIA or NJCCA shall be expressly designated as one of the following based on biological sex

The law’s specific anti-transgender provision notes: “Athletic teams or sports designated for ‘females,’ ‘women’ or ‘girls’ shall not be open to students of the male sex.” The legislation also provides students “deprived of an athletic opportunity” to file lawsuits based on alleged violations.

Civil Rights advocates criticized the bill and said it was likely to lead to more problems for transgender people—children in particular.

“This is the first piece of anti-LGBTQ legislation to be signed into law across the country in 2021,” the Human Rights Campaign said via Twitter. “Trans kids deserve better . . . He’s turned his back on his constituents and made Mississippi a symbol of hate.”

He also issued a full statement to Law&Crime:

Governor Tate Reeves has signed into law the first anti-trans bill to pass in 2021. This bill will hurt Mississippi’s economy but most upsetting, it will hurt transgender youth in Mississippi. We call on the Biden administration to ensure our federal civil rights laws are fully enforced – including those that protect transgender youth from discrimination in schools. Other states should know that passing a bill like this will come with real consequences. Just like it was never about restrooms, this bill is not about sports. It’s about pushing trans people out of public life. This investment in targeting trans kids and scrutinizing the bodies of women and girl athletes will also harm all young people in sport and create barriers to participation in activities that are invaluable to the health and well-being of our youth.

To the trans youth in Mississippi who have been needlessly and cruelly targeted: The government cannot and will not be able to stop you from being who you are. we will never stop fighting for you.

The ACLU also noted that the legislation is “vague and seemingly unenforceable.”

Notably, the provision directing private institutes of higher education to abide by the law is likely to be challenged.

The law is also all-but certain to be challenged in federal court as it appears to run directly afoul of federal law on the books and recent rulings by the 11th Circuit Court of Appeals and the U.S. Supreme Court.