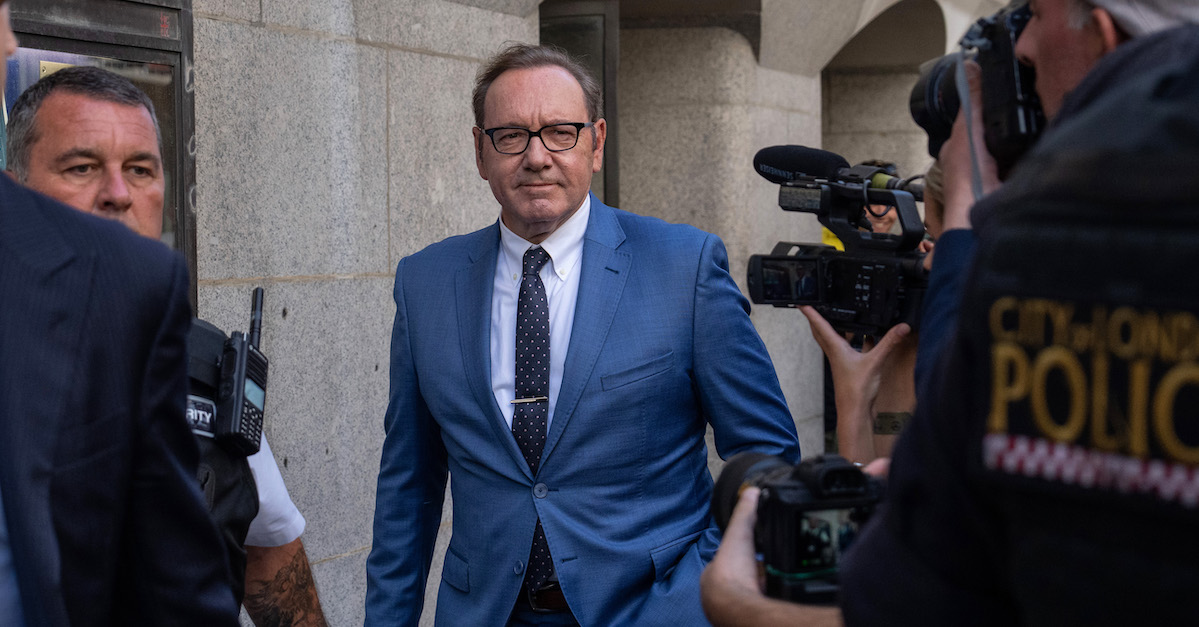 Actor Kevin Spacey leaves the Central Criminal Court on July 14, 2022 in London, England. The Hollywood actor faces four counts of sexual assault against three men and one count of causing a person to engage in penetrative sexual activity without consent. (Photo by Carl Court/Getty Images)

A psychologist hired by the man suing actor Kevin Spacey won’t be allowed to describe the 1986 encounter between the men as a “sexual assault” when she testifies in the civil trial scheduled to open Thursday in New York City.

Lisa Rocchio still can opine about the mental state of Spacey’s accuser Anthony Rapp, whom she’s concluded has post-traumatic stress disorder because of the encounter that’s the focus of his lawsuit.

But the new order from Senior U.S. District Judge Lewis A. Kaplan in the Southern District of New York precludes Rocchio from offering a legal conclusion as to whether Spacey sexually assaulted 14-year-old Rapp in 1986, creating a trickier path for Rapp’s lawyers as they try to connect Rapp’s mental state with what allegedly happened between him and Spacey 36 years ago.

It doesn’t block the path completely, however: Rapp’s lawyers can ask Rocchio hypothetical questions, and she can opine that Rapp’s symptoms or mental status are “consistent with those of someone who has suffered a particularly type of abuse.” Kaplan also didn’t restrict Rocchio’s from offering a narrative “based on hearsay” or evidence of which she isn’t personally knowledge as Spacey’s lawyers asked, calling it “a slightly murkier area.”

“Attempting to draw that line in the abstract in advance of the trial would be inappropriate,” Kaplan wrote. “So too would be attempting to generalize as to whether proposed testimony that has not yet even been described in general goes beyond the scope of the expert’s report.”

The final trial preparations have publicly revealed new information about the case in the last few days, including a three-page excerpt of Spacey’s deposition that shows his partial explanation for an apologetic statement he released shortly after Rapp’s accusations were published in a 2017 BuzzFeed News article.

At the time, Spacey said “I honestly do not remember the encounter” but “If I did behave as he describes, I owe him the sincerest apology for what would have been deeply inappropriate drunken behavior, and I am sorry for the feelings he describes having carried with all these years.”

In a Jan . 17, 2022, video deposition, Spacey told Rapp’s lawyer Richard Steigman, “But as time went on, I realized that this story couldn’t — couldn’t have been true,” according to a transcript excerpt filed Tuesday.

“Are you saying that since you’ve been an adult you’ve never been sexually attracted to boys under 18?” Steigman asked.

“No. It’s not my thing,” Spacey answered.

Spacey, whose legal name is Kevin Spacey Fowler, denied ever sexually touching anyone under the age of 18 after he was older than 18, then expanded on his public statement about Rapp’s allegation later in the deposition.

“I think early on I’m not even sure we knew there was going to be a public response to it. I think I was — I was trying to make sense of a story that made absolutely no sense to me whatsoever,” Spacey said. “I was searching for what could be true, because none of it made sense to me.”

“Is the reason it made no sense to you because the actions that were described were so inconsistent with the way you comport yourself generally?” Spacey’s lawyer Chase Scolnick asked.

“Because you’re not interested in boys and you don’t touch people inappropriately, right?” Scolnick asked.

“I am not interested in boys and I do not touch people inappropriately,” Spacey answered.

Rapp’s lawyers filed the excerpt with their opposition to a request by Spacey’s lawyers to exclude testimony two men who accuse Spacey of sexual assaulting them in separate incidents in 1981. One of the men was 16 at the time, and Rapp’s lawyers say his experience is particularly relevant given Spacey’s deposition testimony that he’s never been attracted to boys under 18.

“If Defendant testifies similarly at trial, it is beyond dispute that Plaintiff can question him about [the] testimony, or about other prior instances in which Defendant did exactly that,” according to the brief from Peter J. Saghir.

Judge Kaplan has not yet ruled on the request, but his order Tuesday rejects a separate request from Spacey’s lawyers to question Rapp about five “events of a sexual nature” that occurred before or after his encounter with Spacey, but he deemed a sixth incident “another matter” and said it’s fair game for cross-examination when Rapp takes the stand.

The attorneys’ briefs are sealed, but Kaplan’s order says Rapp has described the sixth encounter “as a consensual interaction with a then fellow high school student” that left him frightened others would learn of it. Rapp say “the other participant” at a party years later and was “shocked and rattled,” according to Kaplan’s order.

“While Mr. Rapp testified at deposition that it was difficult to say that he was ‘traumatized’ by the subsequent encounter, the jury reasonably might discredit or disbelieve that assertion,” Kaplan wrote. “Depending on the jury’s view of all the evidence, the incident could prove significant on the issue of causation of any emotional distress, the claim of which is at the heart of the plaintiff’s case.”

Kaplan also said Rapp “reportedly discussed the incident in a book he published and at least in one prior interview,” Kaplan wrote in his four-page order. “And I see no unfair prejudice to either party from this incident coming into evidence.”

The rulings come as a pool of prospective jurors is due at the Daniel Patrick Moynihan United States Courthouse in Manhattan Thursday for jury selection.

Expected witnesses included Adam Vary, who wrote the BuzzFeed News article about Rapp’s accusations. Kaplan ruled last month that Vary’s confidential news-gathering information is off limits, but the judge is allowing questions about correspondence Vary had with Rapp before an after the article published that aren’t related to news-gathering. He’s also allowing messages that describe an unpleasant interaction Vary and his father had with Spacey before the article published, and Vary is expected to be questioned about the fact that he and Rapp are longtime friends, but that wasn’t disclosed in the article.

In an excerpt filed by Rapp’s lawyers Tuesday, Rapp said in a Feb. 3, 2021, video deposition that Vary “did not misquote me.”

“Did you see anything in the article that was inaccurate?” Rapp’s lawyer asked.

Actor John Barrowman also is expected to testify. Barrowman, who played Captain Jack Harkness in Doctor Who and its spinoff Torchwood, was with Spacey and Rapp at Spacey’s apartment in New York the night Rapp says Spacey physically pinned him to a bed. But a psychiatrist hired by Spacey’s defense, Alexander Bardey, said in deposition he believes Rapp was envious that Barrowman and Spacey were flirting that night and felt left out.

But Barrowman said in a deposition partly filed in court that he didn’t tell Rapp about Spacey hitting on him that night “until many, many years later.” Rapp’s lawyers want to question Bardey about Barrowman’s statements when Bardey takes the stand.

Spacey’s recent criminal charges in England, where he’s accused of assaulting three men in London and Gloucestershire between 2005 and 2013, are not expected to come up in trial.

Read the full order from Judge Kaplan below: