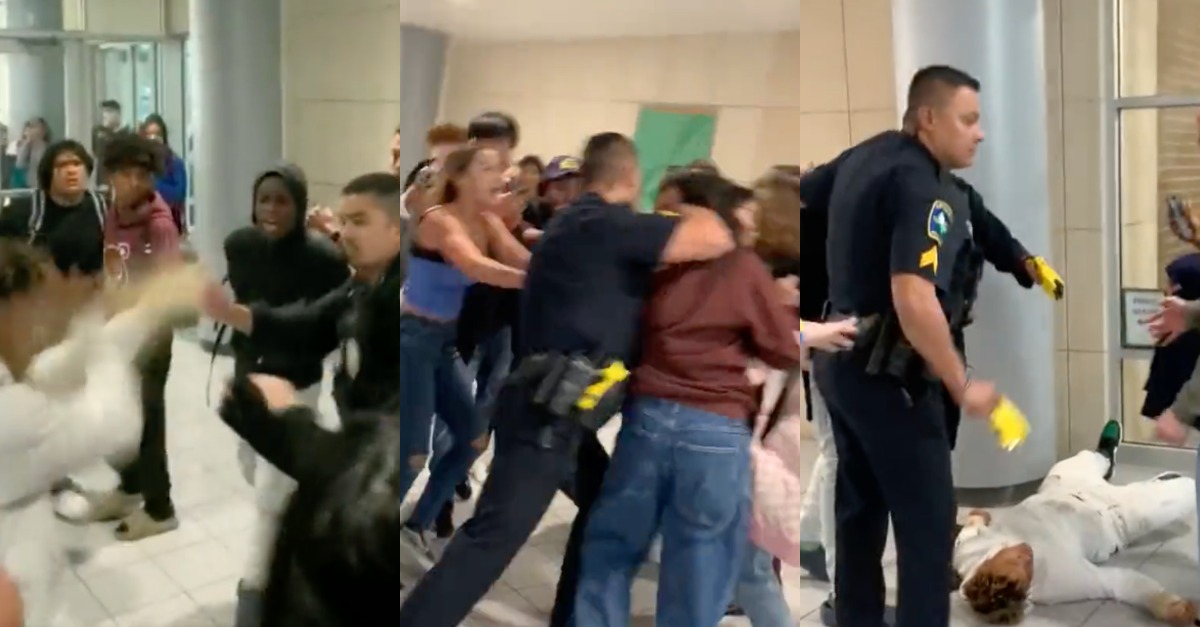 Several students were pepper-sprayed, at least one was tased, and four were arrested on Friday during a protest against the purported handling of an alleged sexual assault at a Texas high school. Now, parents are upset and want answers, but the school that has been engulfed by the controversy says the students were aggravated by misinformation about the underlying incident.

Vaca told the news outlet that her daughter and other students were protesting “a culture of sexual harassment and inaction” by administrators in the Little Elm Independent School District north of Dallas.

Students say the protest stems from a girl who reported a sexual assault to school authorities and was subsequently given multiple days of in-school suspension, or ISS, for making the accusation. Law&Crime has learned the names of the students allegedly involved in that initial incident but is not printing them due to their ages and the nature of the matter.

Don’t you love when your school has a protest for a girl who got ISS for reporting her Sexual assault and now kids are getting tazed, pepper sprayed, and arrested

A Facebook post purports to detail the controversy and is allegedly being shared widely with the teenage girl’s permission. It claims that a sophomore accuser reported that she had been repeatedly sexually assaulted and harassed on her school bus by the same freshman over the course of a month. Multiple witness statements allegedly supported the girl’s accusations. An investigation by the school turned on surveillance footage that showed the accuser talking to the alleged abuser.

“Did you do anything to allow it?” a police officer is said to have asked the girl who was then allegedly punished for making the report.

The Little Elm ISD, however, insists that the students involved with the demonstration were actually wrong about what occurred.

“The demonstration was a result of a social media post the day before that contained inaccurate information regarding an incident that happened a month ago,” the school district wrote in a deleted, then reappearing Facebook post.

“I’m pissed because they sent me, as a parent, an email saying — that knows what’s been going on — saying, ‘Oh, they just wanted to disrupt, you know, being disruptive,'” Vaca continued. “No, they’re not being disruptive. The root of the problem is their sexual harassment.”

And she’s not the only one.

“I was disgusted,” parent Anna de Luna added. “I was shocked. As soon as I got in there were students that were being arrested and manhandled on the floor. There were children crying and screaming. It was utter chaos. People were banging on the doors. The police were pushing the children around and it was utter shock, utter shock.”

De Luna also dismissed the school district’s defense of itself.

“This school has had a lot of issues with sexual harassment, sexual assaults,” she went on. “My daughter has personally been sexually assaulted at this school.”

According to Dallas/Ft. Worth FOX affiliate KDFW, some scenes from the protest were “too intense” to broadcast.  Those images included police brandishing a baton, officers yelling at students, students in handcuffs, and a student lying on the floor “seemingly unconscious.”

“It was bad. I mean, I’ve never seen nothing like it,” parent Chandra Weekly told the FOX station. “We’re standing outside and we see helicopters, we see kids are in police cars. We see kids everywhere crying. Only way we knew what was going on was our kids texted us. I don’t even feel like my kids are safe here because, it’s like, these are kids. What would have made you use that kind of aggressiveness towards kids, you know?”

Multiple videos of the incident are circulating on social media. One of the most-shared videos shows what appears to be pepper spray being deployed against students by police officers. Some videos show what appear to be at least one student shoving police back after the confrontations turned violent. Another video appears to show a police officer shoving a student, who then turns around, rears back, and is doused by a large blast of apparent pepper spray to his face before he stumbles around. As the student covers his face, he is then tased and falls to the ground.

Little Elm Public Information Officer Erin Mudie “said they were not aware of any students being Tased,” according to Fort Worth-based CBS affiliate KTVT.

Yet another video, however, also suggests tasing did occur:

Police spray and tase students at Little Elm Highschool in Texas after a walk out for a girl who was sexually assaulted and put on suspension. this afternoon. pic.twitter.com/SEenszaAdD

According to Dallas NBC affiliate KXAS, at least one other student claims to have been shot with a police “stun gun” as well — after he tried to respond to, and get help for, the first student who was sent collapsing to the ground by the officer’s Taser.

“He pushes me away, he pulls out his Taser and pushes me with the Taser and he’s like, ‘Hey, you need to back off.’ I’m like, ‘He’s not breathing, we need to do something about this.’ And he ends up putting the Taser to my stomach, he Tases me, one of the other officers pushes me on the shoulder, he actually rips my shirt,” junior Kaden Throckmorton told the outlet. “I was just running off all of the adrenaline in my body. I knew that when he tased me my stomach tensed up. I knew that what I was doing was for the better good and I was just scared. I was scared.”

The Fort Worth Star-Telegram also reports:

Police said they used a taser and pepper spray on students . . . [o]ne student was tased by police and several were pepper-sprayed. A spokesperson with the Little Elm Police Department said police used the taser and spray on a few students who moved aggressively toward other students, teachers and police officers.

According to the newspaper and WFAA-TV, police said they were “unaware of any injuries at this time,” though the students who were arrested were done so on suspicion of assaulting police officers and there were reportedly “emergency medical personnel at the scene.”

Parents are planning to show up in large numbers to a school board meeting currently planned for Dec. 13 in order to obtain answers about how the planned protest ended in violence.

The school district changed its phone number late Saturday morning, according to their Facebook page.

A post on the district’s Facebook page claims an original statement concerning the protest and the ensuing police response “disappeared.” The currently available statement reads in full:

The demonstration was a result of a social media post the day before that contained inaccurate information regarding an incident that happened a month ago.

At this time, everything is calm at the high school and we are resuming the school day.

The Little Elm Police Department did not independently post on social media about the incident; rather, it reposted what the school district wrote on Facebook.

The identities of those arrested were not released. Texas law generally precludes the release of information about minor offenders.