Self-Proclaimed Jan. 6 ‘Hero’ Charged with Bringing Gun to Capitol Claims He Never Hit a Cop: ‘I Can Barely Make A Fist Because of My Arthritis’ 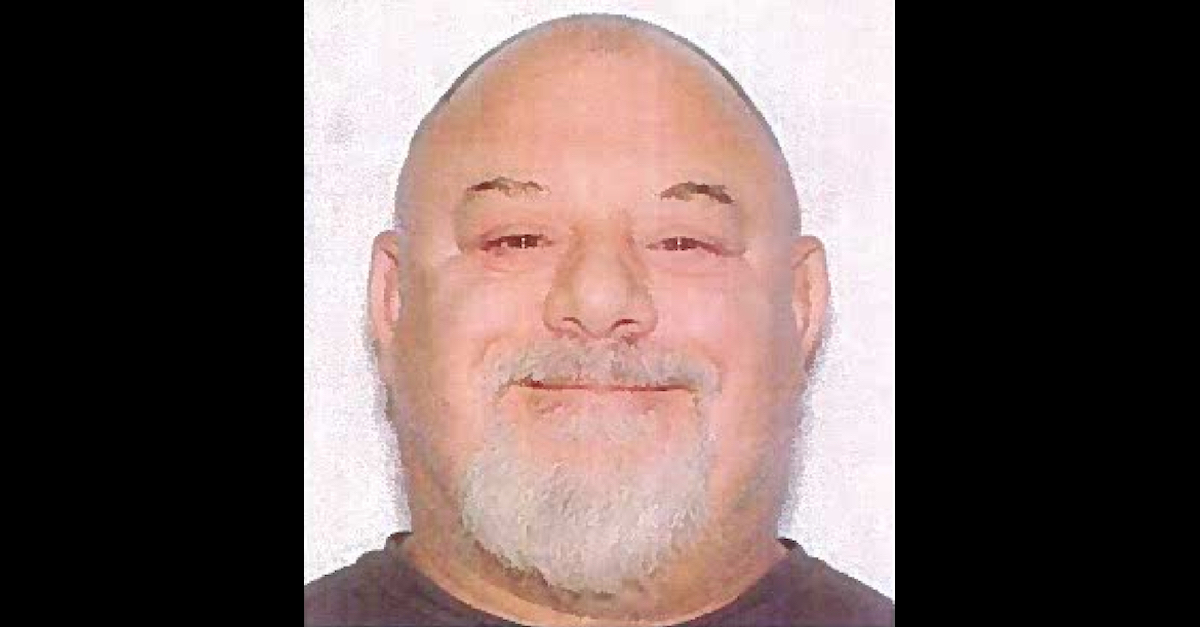 An Indiana man is charged with bringing a loaded revolver to the Jan. 6 breach of the U.S. Capitol Complex and then attacking a police officer.  Mark Andrew Mazza, 56, of Shelbyville, is charged with illegal possession of a firearm on Capitol grounds, civil disorder, and assaulting, resisting, or impeding certain officers with a dangerous weapon, and other counts outlined in a criminal complaint.

According to a statement of facts filed in U.S. District Court for the District of Columbia, Mazza’s Taurus Revolver was loaded with both .410 gauge shotgun shells and .45 caliber hollow point bullets.  Federal agents noted that the model of weapon Mazza allegedly carried on Capitol grounds “is one of a few handguns that can fire both shotgun shells and regular bullets through the barrel.”  The choice of weapon suggested to federal agents that Mazza intended “to use the weapon against multiple targets at the same time,” they allege.

The gun fell from the waistband of Mazza’s pants during a back-and-forth battle with a police officer listed only as CW-1, or Complaining Witness 1, in court papers.  The altercation occurred on the West Front Terrace at about 2:30 p.m. on Jan. 6.

The officer recovered the revolver, and Mazza is alleged to have fled the scene “with the assistance of others in the large crowd” who prevented CW-1 and other officers from making an arrest.

The gun was tested for fingerprints and DNA, the documents state.  It was also not registered in Washington, D.C., the documents allege, and Mazza was listed as the original purchaser of the weapon based on its serial number.

Mazza reported the gun “stolen” to the Shelbyville, Indiana Police Department on Jan. 8, the documents indicate.  He claimed he was in Cincinnati, Ohio, on Jan. 5, 2021, and that the gun was stolen from his rental car from near the Hard Rock Casino sometime between 10:30 a.m. on Jan. 5 and midnight on Jan. 6.  Mazza claimed he did not want to report the gun missing to casino police, so he claimed he drove home on Jan. 6 and went to sleep because he was tired.

However, the cell phone Mazza used to call in the alleged-to-be fictitious story placed Mazza near the U.S. Capitol around the time CW-1 was attacked, federal investigators said.  Phone records placed him on a path of travel between Ohio and Washington, D.C., they further claimed.

Mazza’s social media accounts cited by federal authorities remain active as of the time of this report.  Mazza’s Facebook page contains a litany of pro-Donald Trump images, anti-abortion rhetoric, pro-military messages, and other conservative talking points — including suggests that Ivermectin is an appropriate COVID-19 treatment and complaints about the validity of the 2020 election.

“Politicians are like sperm,” proclaims one comic Mazza posted.  “One in a million turn out to be an actual human being.”

Mazza also posted images suggesting Bill and Hillary Clinton should be imprisoned, that Hillary Clinton was similar to Adolf Hitler, that Joe Biden should be welcomed in Guantanamo Bay, and that Ruth Bader Ginsburg was part of the “Deep State.”  The latter image bore the heading “TREASON” in bold, red letters. George Soros‘s picture was also included under the heading.

Mazza also tweeted video from outside the capitol on Jan. 6 — much to the convenience of prosecutors who were trying to tie him to the events there.  As of the time of this writing, Mazza’s video remains live on Twitter; it was posted in direct response to a tweet by Donald Trump, Jr., from two days earlier.

Although the images appear to have since been deleted, the feds allege that Mazza tweeted several selfies which appeared to show himself among the crowds at the capitol on Jan. 6. 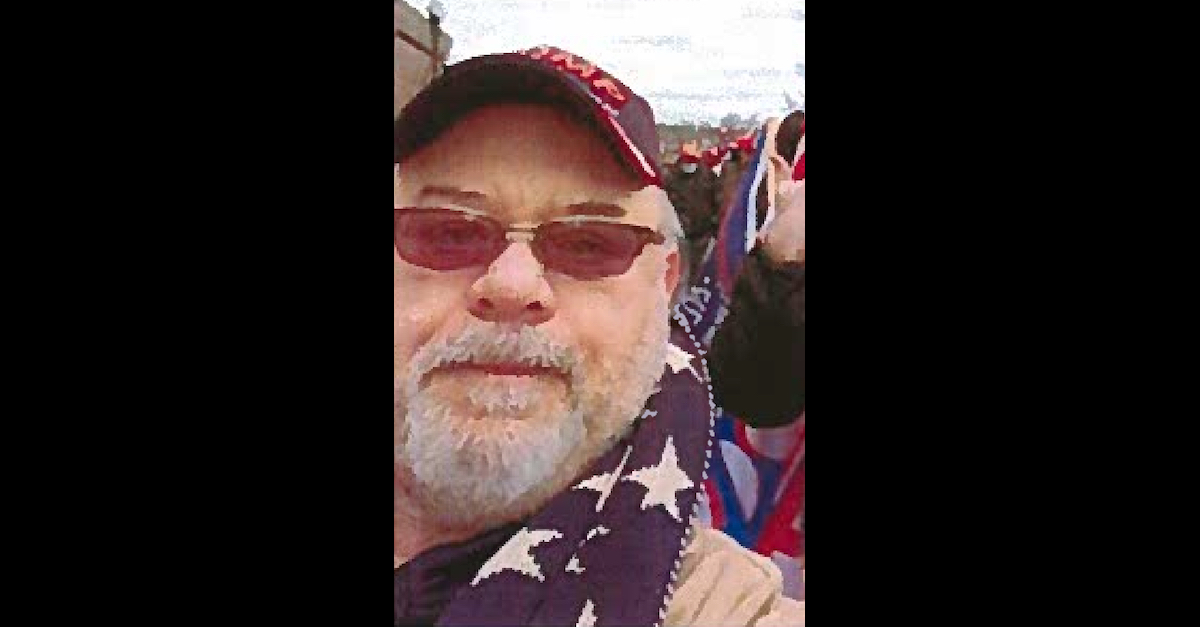 CW-1 struggled to pick Mazza from a photo array and said the person who attacked him “look[ed] very close” to another person in the array — not the defendant.  “It’s real fricking hard,” CW-1 said while noting that those present on Jan. 6 wore hats and other clothing; some disguised themselves.  “[H]e had this look,” though, CW-1 said of the other individual who looked somewhat like Mazza in the array. 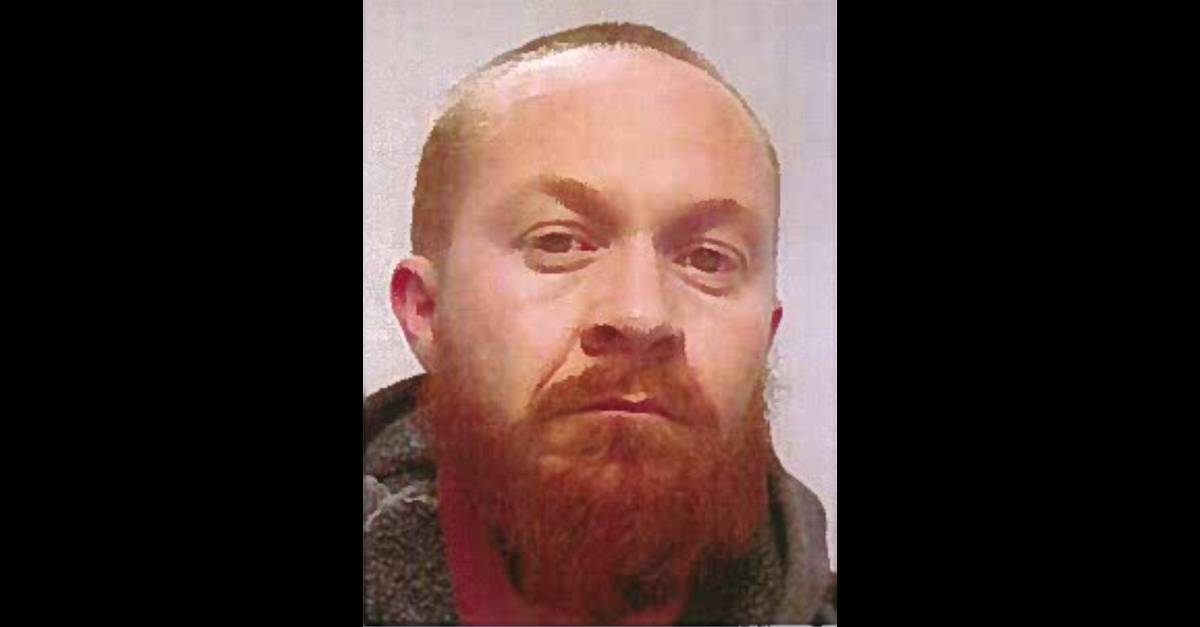 A police officer who said he was attacked by Mark Andrew Mazza suggested this photo of an unknown man looked like his attacker — but admitted he wasn’t 100% sure. The image was embedded within federal court documents.

When federal agents went to speak to Mazza, court documents say he responded this way: “I was there . . . so were a million other people.”

Mazza continued to talk while a search warrant was executed on his property. Agents recorded the conversation, according to a statement of facts.

Mazza admitted he had the gun in D.C. after being warned not to lie about it.

“I had it on me and I stopped the crowd ok, they were trying to get in,” he told federal agents. He admitted he attended the so-called “Stop the Steal” rally in Washington, D.C., before he went to the capitol; he said he and others “kept trying to pull them back down” — an apparent suggestion that he was trying to prevent the attack, not encourage it.

He alleged that others were to blame for the destruction and violence.

“[W]e knew it was Antifa because we are law abiding citizens, we don’t do that . . . we don’t loot,” he allegedly told investigators.

Mazza described some of the subsequent events from his perspective. He said he “reported the gun stolen because in case something happened and if Antifa found it, someone might get killed” — and his name was “all over it.”

“I did falsify a report,” he eventually admitted. “It’s missing, not stolen.”

The Trump-adherent-turned-defendant attempted to affirm that he didn’t “grab, push, shove, pull down” any police officers: “I can barely make a fist because of my arthritis.”

When asked if he wanted to continue speaking, Mazza continued with a resumed reference to House Speaker Nancy Pelosi:

It was cold as hell that day, that whole three days . . . never did get to Nancy . . . I thought Nan and I would hit it off . . . I was glad I didn’t because you’d be here for another reason and I told my kids that if they show up, I’m surrendering, nope they can have me, because I may go down as a hero . . . I’m nonviolent, I’m a patriot and it pisses me off to see where we’re at . . . If you do have to come back and take me, put me in a fed . . . I just want three squares and a nice clean room, someone takes care of my health care and I’m good.

Several pages of the court records then walk readers through surveillance camera images which are alleged to have captured Mazza “assisting the pushing against officers.” Body worn cameras from various officers also purport to show Mazza “holding the glass doors open for other protesters with his right hand while clenching a black baton.” 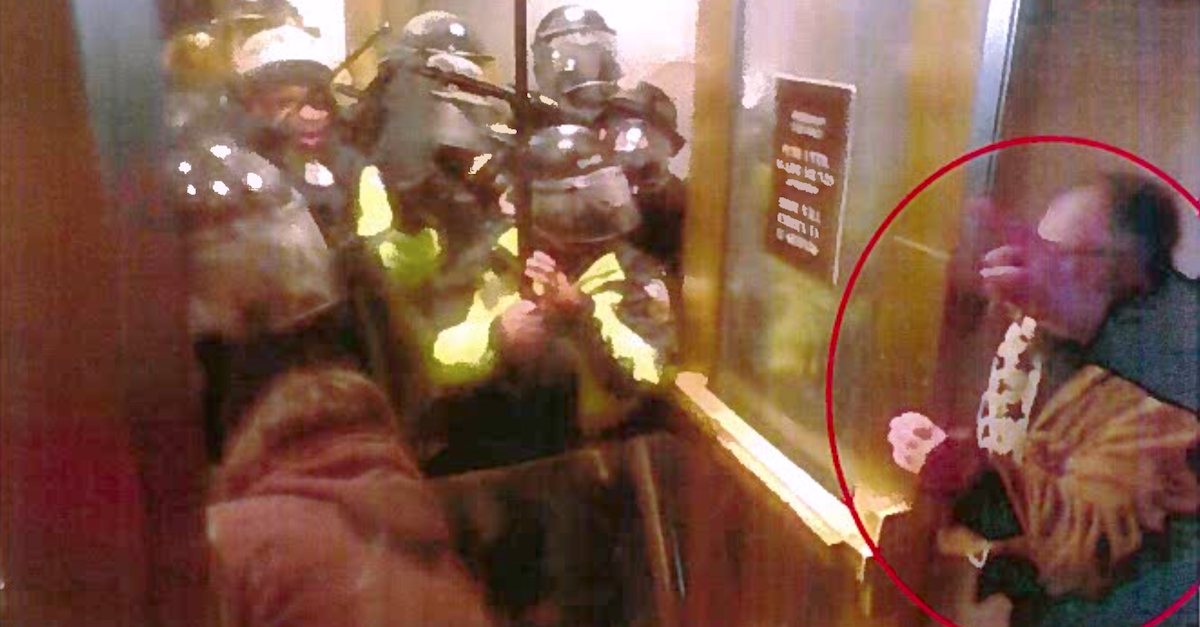 A man alleged to be Mark Mazza (circled in red) holds open a door to the U.S. Capitol Complex on Jan. 6, 2021. (Image via federal court documents.)

“As he held open the glass door, other rioters assaulted the MPD [Metropolitan Police Department] Officers who were defending the tunnel entrance and resisting the protester,” the document continues. “Additional BWC footage from another DC [M]etropolitan Police Officer revealed MAZZA actively swinging the baton at police officers.”

“This is our fucking house!” Mazza is alleged to have yelled in one video. “We own this house! We want our house!”

The documents further allege that Mazza began “pulling people into the tunnel area to assist . . . in the assault on MPD Officers.”

Read the entire charging documents below: